A woman ha shared a picture of man’s very obnoxious Tinder profile and the post has gone viral on Twitter.

Twitter user, Trash Queen, from Essex, shared the Tinder picture and profile, which showed a man, using the name Kirk, with his trousers round his ankles – and a very strict set of rules for potential dates.

According to Kirk, any ‘lucky’ lady that gets to go out with him isn’t allowed to have children, and has to have a job – as he doesn’t want to date a ‘bum’.

Trash Queen shared the picture of Kirk, who also boasted about owning a German Shepherd and his own flat, on Twitter, saying: ‘I thought I’d give Tinder a go but honestly, it’s fully put me off dating.’

Twitter user loved the post, sharing it over 26,000 times, with many commenting about why he hadn’t pulled his trousers up for his profile photo.

Twitter user, Trash Queen, from Essex, shared the Tinder picture and profile , which showed a man, known as Kirk (pictured) with his trousers round his ankles and a very odd set of rules if you intended to date him 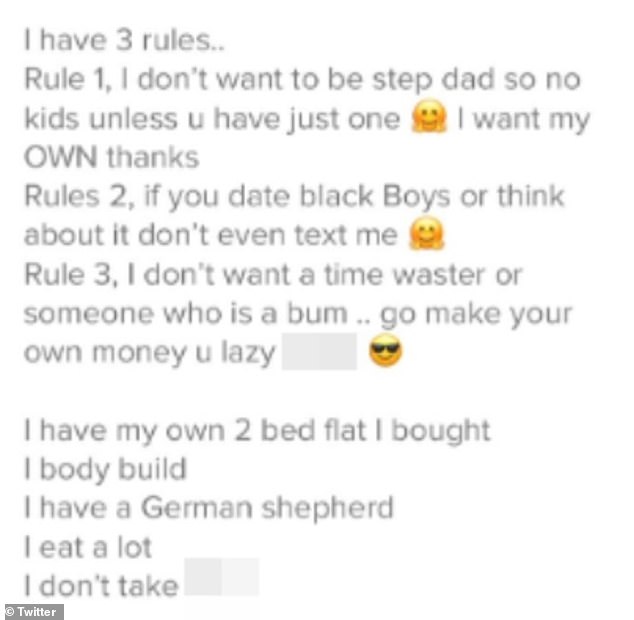 Kirk had posted the profile with the picture, that stated: ‘I have 3 rules…..Rule 1, I don’t want to be a step dad so no kids unless u have just one – I want my OWN thanks.’

His shocking second rule left many commenters appalled, as she added: ‘If you date black Boys or think about it don’t even text me’.

In a bid to make him sound desirable to women Kirk said alongside his photo: ‘I have my own 2 bed flat I bought, I body build, I have a German shepherd, I eat a lot, I don’t take s**t’.

Twitter was mostly appalled by his choice of photo, with one joking: ‘Does he need help pulling his trousers up?’

Twitter loved the post, sharing it over 26,000 times and with many commenting about why he hadn’t pulled his trousers up.

Another commented: ‘Right? This look reminds me of when my old roommate’s toddler would come waddling out of the bathroom with his pants around his ankles to let us know he didn’t make it to the toilet on time.’

While one questioned his fashion choice by simply saying: ‘I wonder what made him think that the pants around the ankles was a good look.’

Some men couldn’t believe his rules, with one tweeting: ‘I apologise on behalf of men everywhere.’ 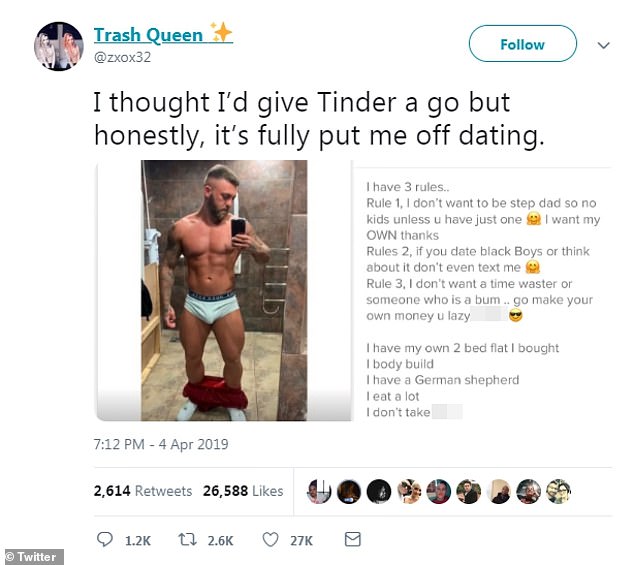 While other single Twitter users joked: ‘I’m going to screen shot this for when my relatives ask me why I’m still single.’

While  another joked about his relationship status, and said: ‘I wonder why he’s still single,’ and ‘What a catch.’

Others questioned his personality: ‘Someone clearly skipped personality day.’