Tinder is going all-in on a slew of new video features.

According to The Verge, Tinder has confirmed that it is testing out a new video feature that will pit users against one another in a game of live-streamed trivia.

While the details of how the game will work are sparse, screenshots obtained by The Verge suggest that the trivia game will be live and may even include a chat feature in which a ‘live audience’ can watch along.

Tinder is testing out in-app trivia (pictured) that will pit users against one another. Its unclear what exactly the game will consist of our how it will help match Tinder users

The company also made sure to note that the test does not guarantee that the feature will ever be released on a wider scale.

The Verge says that it is currently being tested with an undisclosed percentage of Tinder users.

‘Similar to our first digital shared experience offered on Tinder, Swipe Night, we plan to bring more of these activities to Tinder in the future,’ the company told The Verge.

‘However, these concepts are only a test and may never launch. We look forward to providing more information when it’s available.’

While Tinder is testing new video features, including the ability to live video chat, other ventures like its ‘Swipe Night’ have been postponed.

The choose-your-own-adventure style video series was delayed by Tinder due to its apocalyptic subject matter and its context under an ongoing coronavirus pandemic. 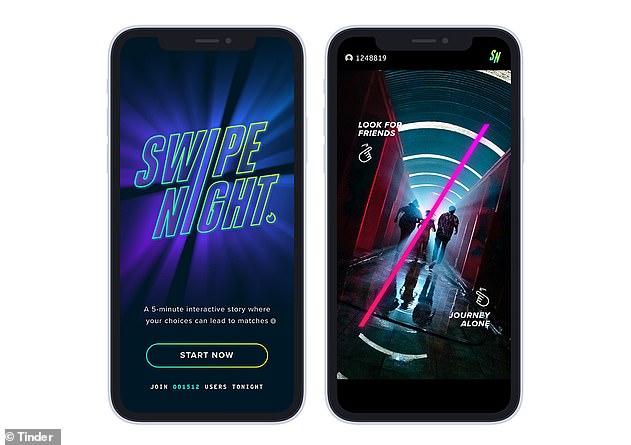 Tinder didn’t offer much in the way of specificity for when the series would be released to its users outside of its brief statement.

Tinder’s first Swipe Night was also an ‘Apocalyptic’ survival story and consisted of short five-minute videos during which users were periodically given seven seconds to choose what happens next.