A tiny ‘nanocardboard’ spacecraft powered by lasers and inspired by corrugated cardboard could help NASA collect evidence of life on Mars.

US engineers say a fleet of the miniature aircraft could be launched from ground-based rovers and steered with light to collect chemical samples on the Red Planet.

Each nanocardboard device consists of a hollow plate of aluminium oxide, which is a few nanometres thick, and carries small sensors.

It weighs as much as a fruit fly – about a third of a milligram – and ‘levitates’ thanks to changes in air temperature.

The spacecraft are particularly well suited to planets such as Mars, where the thin atmosphere and low gravity enhance the fleet’s ability to levitate.

The developers believe their fleet of ‘nanocardboard’ vessels could help supplement exploration apparatus on NASA’s Mars 2020 rover, due to be launched this July.

A n artists’ visualisation of the ‘nanocardboard’ flyers, which are inspired by corrugated cardboard and other ‘sandwich structures’ used in architecture and aviation

Perseverance will carry with it the first aircraft to ever fly on another planet, called the Mars Helicopter, but may need other options should it malfunction.

‘If anything goes wrong, your experiment is over, since there’s no way of fixing it.

‘We’re proposing an entirely different approach that doesn’t put all of your eggs in one basket.

‘In addition to carrying sensors, our flyers could simply land and have grains of dust or sand passively stick to them, then transport them back to the rover so it doesn’t need to travel as far.’

Nanocardboard is made out of an aluminium oxide film with a thickness of tens of nanometers, forming a hollow plate with a height of tens of microns.

Its sandwich structure is similar to that of corrugated cardboard – an upper and lower layer of card within which another rippled, or ‘fluted’, layer.

The design of corrugated cardboard helps give the material strength and a cushioning effect upon impact, while also being fairly light thanks to the air within.

Penn University researchers have given their nanocardboard corrugated layers, inspired by paper cardboard, as well as ‘sandwich structures’ used in architecture and aviation. 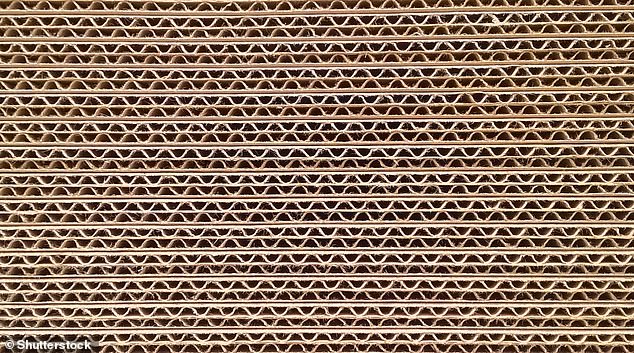 Bargatin’s group has been experimenting and improving on their nanocardboard design since 2017, inspired by the common corrugated paper packaging material, which features a partly hollow interior

This array of hollow channels’ allows the devices to levitate with the application of heat – which could be in the form of a pin-point laser emanating from NASA’s Mars 2020 rover.

As one nanocarboard plate heats up, the difference in temperature gets air circulating through its hollow structure and shooting out of corrugated channels, thrusting it off the ground.

‘The air current through these micro-channels is caused by a classical phenomenon called “thermal creep”, which is a rarefied gas glow due to the temperature gradient along the channel wall,’ said Howard Hu at the Department of Mechanical Engineering and Applied Mechanics, University of Pennsylvania. 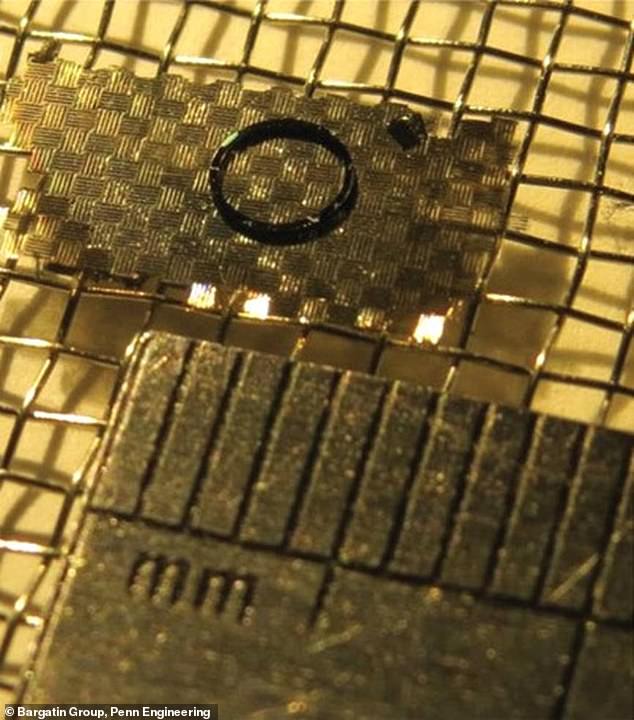 Researchers have measured the flyers’ ability to lift mock payloads – silicone rings, pictured here, which were attached to the top of the plates

The direction of the air flowing out of their channels – which in turn controls its direction of flight – depends on which parts of the plate are heated.

Researchers are using a low-pressure test chamber with integrated cameras to study nanocardboard’s ability to levitate when bright light is shone on it.

They have so far measured the flyers’ ability to lift mock payloads – silicone rings, which were attached to the top of the plates.

Studying these dynamics are important to establish nanocardboard’s potential as a material for atmospheric probes, especially on other worlds such as Mars, but also Pluto and Neptune’s moon Triton.

On Mars the tiny flyers would be limited to sensors and payloads weighing only a few milligrams. 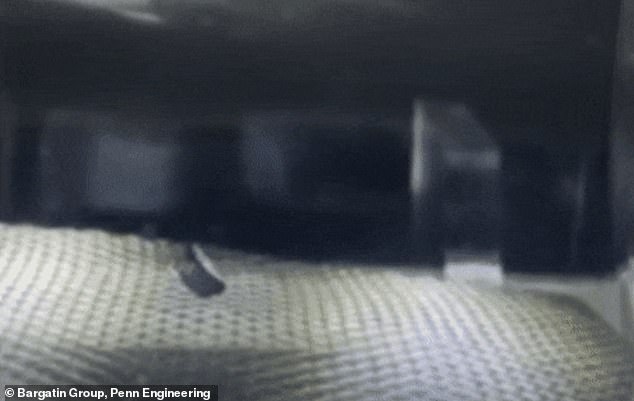 The team is therefore working on how to miniaturise chemicals sensors that would be on-board to detect water or methane – key signatures of life on Mars.

The thinner atmosphere and low gravity on the red planet would also let the flyers carry payloads ten times as big as they are, while the corrugated channels will help withstand bending and prevent cracks.

Terrestrial applications are also possible, the researcher said, such as monitoring weather in real time.

‘The Earth’s mesosphere is pretty similar to the Martian atmosphere in terms of density, and we currently don’t have anything that flies there, since it is too low for space satellites but too high for airplanes and balloons,’ Bargatin said.

‘Ideally, you’d like to have some sensors up there as well.

‘The more knowledge you have about the movement of the atmosphere at that level, the better predictions you can make about Earth’s climate and even weather.’ 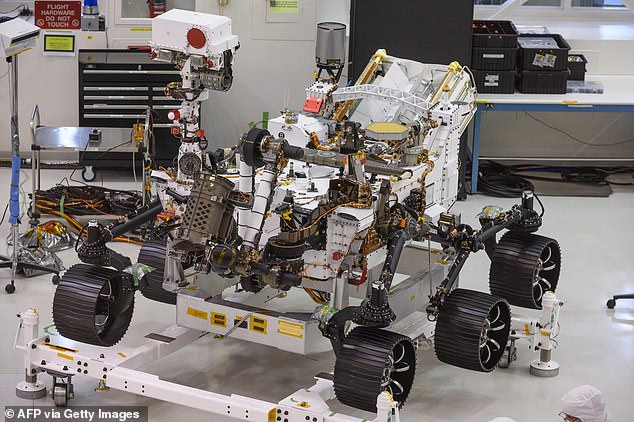 Perseverance is due to land on Mars’ Jezero Crater on February 18, 2021. which will carry with it the first aircraft to ever fly on another planet, the Mars Helicopter. The nanocarboard flyers could offer a lighter method to record evidence of life in the planet’s atmosphere

The nanocardbord could hypothetically be operated by Perseverance, which will launch this July and land on the surface of the Red Planet next February.

Perseverance is described by NASA as a ‘robotic scientist’ weighing just under 2,300 pounds (1,043 kilograms).

It will search for signs of past microbial life, assess Mars’ climate and geology, collect samples and help pave the way for human exploration of Mars.

The launch period for the rover – which NASA is adamant will remain unchanged despite the coronavirus pandemic – extends from July 17 through to August 5.

NASA’s Mars 2020 rover will search for signs of ancient life on Mars in a bid to help scientists better understand how life evolved on our own planet.