We may soon have teeny tiny robots crawling throughout our bodies to deliver drugs.

That is, if a prototype robot from scientists in Germany ever sees the light of day.

A team of researchers from the Max Planck Institute for Intelligent Systems in Stuttgart, Germany have developed a rubbery, worm-like robot that they hope will be used for medicinal purposes in the future.

The robot can crawl, walk and roll on land, swim in water and navigate obstacle courses. It can even ‘do the worm.’

A team of researchers from the Max Planck Institute for Intelligent Systems in Stuttgart, Germany have developed a rubbery, worm-like robot that they hope will be used for medicinal purposes in the future.

It’s made of a soft, rubbery substance that’s embedded with magnetic particles.

The scientists use a magnetic field that allows them to control whichever way the robot moves.

The team said they were inspired by creatures like jellyfish, beetle larva, caterpillars and other soft-bodied animals when creating the millirobot.

The robot is about a seventh of an inch long, making it smaller than a penny.

While it doesn’t have any legs, its soft surface allows it to move like a nematode, jumping ‘over obstacles that are too high or too time-consuming to roll or walk over,’ by contracting its shape on a rigid surface, the study noted.

The robot’s pliable structure allows it to move between wet and dry environments.

Even with all that it can do, Metin Siddi, who led the study, told the New York Times that he and the scientists still consider it a ‘minimalist robot.’

That hasn’t stopped the scientists from setting forth some big goals for the little robot.

The team hopes that the millirobot can be used in medicine for targeted drug delivery and to improve minimally invasive surgery techniques. 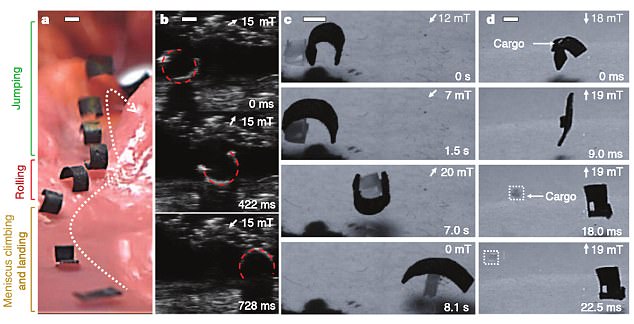 Researchers in Germany have developed a pinworm-like robot that can walk, jump, crawl and swim in water. Eventually, they hope that it can be used for targeted drug deliver and to improve minimally invasive surgical procedures

Siddi said the robot is small enough to be inserted into our digestive and urinary systems, or eventually, our vascular system to deliver drugs to hard to reach places in the human body.

The robot’s flexible, soft coating enables it to crawl across organs, muscles and swim through bloodstreams with ease.

For many, the idea of having a robot deliver drugs inside your abdomen might make people queasy.

But the study notes that the robot can be located using medical imaging devices.

‘We also show that the robot can be visualized by an ultrasound medical imaging device as it rolls within the concealed areas of an ex vivo chicken muscle tissue,’ according to the study.

The robot can also grip an object, transport it to a location and ‘eject a cargo that is strapped onto the robot,’ the scientists noted. 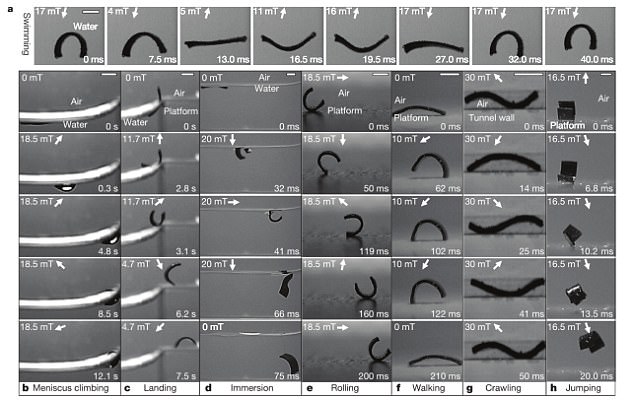 The scientists tested the millirobot in an obstacle course, where it crawled and walked across dry land, as well as jumped over a hole. The robot was also made to swim through deep water

Siddi told the Times that he’s already thinking about making the robot smaller, in addition to including a small pocket on the robot that they can open and close using magnetic fields.

He added that the scientists are working on creating a biodegradable version of the robot that can be dissolved inside the body without any side effects.

‘That’s one of our major goals in my group,’ Siddi said, according to the Times. ‘And that’s possible.’

At the end of the day, while the tiny robot is capable of some pretty intelligent tasks, it’s also just downright adorable.

‘These critters are very cute!,’ Leif Ristroph, a mathematician at New York University, told the Times.

‘Love how the authors put the little guy through mini-obstacle courses,’ Ristroph added.

COULD THIS TINY ROBOT SOME DAY BE USED TO DELIVER DRUGS INSIDE OUR BODIES?

Scientists at Germany’s Max Planck Institute for Intelligent Systems have developed a tiny robot that might be able to be used for medicinal purposes.

The robot is about a seventh of an inch long, making it smaller than a penny.

Called a ‘millirobot,’ it can walk, crawl and jump on land, as well as swim in water.

Scientists modeled it after creatures like jellyfish, caterpillars and larva

Without any legs, the robot is made of a soft, pliable rubber that’s embedded with magnets

The robot is controlled using a magnetic field

It may also be used to improve minimally invasive surgical procedures