Titans winger Treymain Spry says he’s lucky to be alive after allegedly being coward punched in Brisbane’s CBD on March 10, leaving his rugby league career in jeopardy as he waits for brain scans to decide his future.

Spry, 22, and his partner were walking through the Fortitude Valley nightclub precinct around 2am when he spotted his ex-girlfriend and her new boyfriend across the street.

The man then allegedly ran across the road and king-hit Spry from behind.

Treymain Spry holds up a ‘GO TITANS!!!!’ homemade card, cheering on his club from Brisbane Hospital after allegedly being king-hit last month

Spry has been recovering from a fractured skull, broken cheekbone and bleeding on the brain, and experienced severe headaches every day for three weeks after the alleged punch.

The five-game NRL player says doctors told him the hit could have ended his life.

‘The doctors told me I am very lucky to still be here,’ Spry told the Sunday Mail.

‘At first, I was worried about whether I would play again. I was trying to take it all in and I was just pretty hopeful I would be able to play the game again.’ 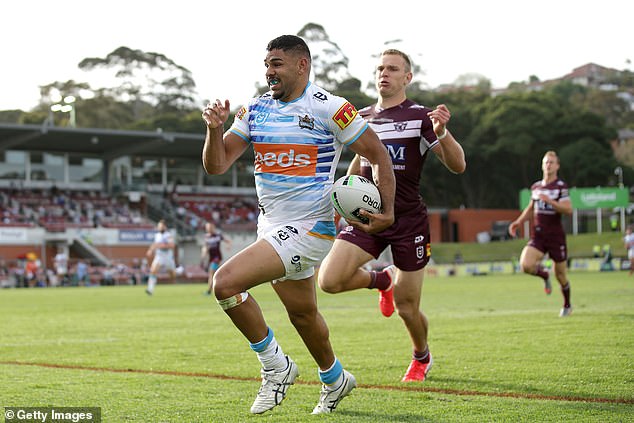 Treymain Spry runs away from Tom Trbojevic in round 19 2020, where he scored a try in the Titans 42-24 victory over Manly

Spry has no recollection of the incident, as the alleged punch knocked him out instantly.

‘I knew the identity of the person who hit me. I have never met him but he is the new boyfriend of my ex-girlfriend.

‘I was just lucky that one of my mates was there. As I was falling, he broke my fall and caught me. My head still hit the ground but not with as much force if he wasn’t there to catch me.’

The Gold Coast rookie will undergo a brain scan on March 9 to determine if the hit has caused long-term damage to his skull and brain. 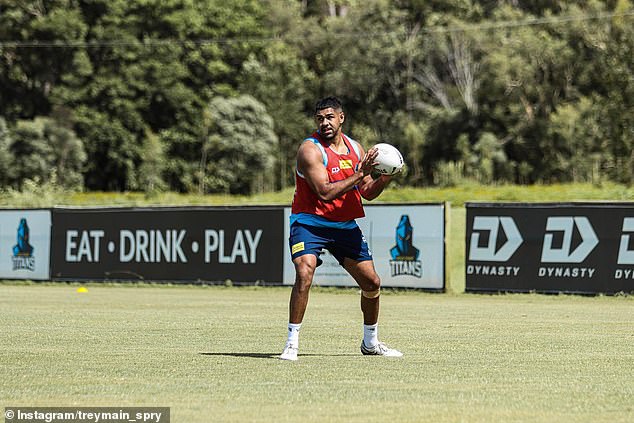 Spry and the Titans will be keeping their fingers crossed that doctors give him the green light to play on, after the 98kg winger starred with two tries in the Titans’ pre-season 26-all draw against the Broncos on February 19.

Last year Spry was granted a release by the Titans due to personal issues and returned in pre-season, outrunning Broncos flyer Selwyn Cobbo over 60 metres to score in the trial clash.

The young Indigenous man from Ipswich has thanked the Titans for sticking by him, given the fact he was on the verge of signing his first full-time contract with the club when he was hospitalised.

A Brisbane rugby player was charged with grievous bodily harm in connection with the alleged attack and was due to appear in the Brisbane Magistrates Court on April 11.