‘You’re a PIG!’: Furious girlfriend catches new boyfriend trying to cheat on her with fitness instructor… after same YouTube show caught her ex trying to play away with a ‘cougar’

A woman whose ex-partner was filmed falling for the charms of a ‘cougar’ was left furious when her new boyfriend also seemed willing to cheat on her, by arranging a date with a fitness instructor – and again it was all caught on camera.

The unnamed girlfriend had moved to Mexico City with her new partner and decided to test his loyalty via the YouTube channel To Catch A Cheater – just as she had done with her former beau.

Convinced her boyfriend will ‘do good’, she watches on a monitor as he is seen in a gym where he is working out with a trainer, known only as Andrea.

Overweight, and wearing red shorts and top, he lifts some light weights and does a few stretches while slender Andrea bends over in front of him. 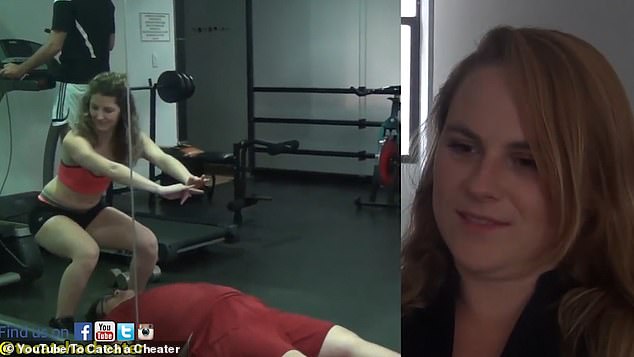 During the workout, the overweight man exercises very closely with his instructor, known only as Andrea, during the episode of To Catch A Cheater. Andrea was acting as a stooge during the filming to test his loyalty 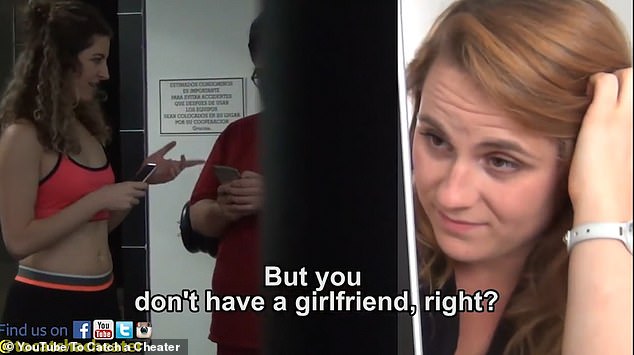 Instructing him to ‘go down’ while he does some squats, she feels his thigh.

‘You want to work out muscle? Can you feel it?’, she says, before slapping his bottom.

They then engage in small talk – him asking about bars and complimenting her on her physique; her being overly tactile in response.

At one point, Andrea bends over and beckons him to stand closer behind her – while his distraught girlfriend is seen in the studio looking aghast. 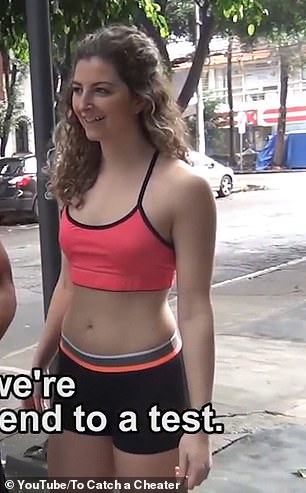 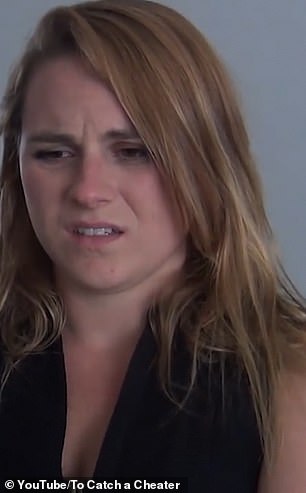 After watching the way her partner behaved with Andrea (left), the upset girlfriend (right) calls him a ‘son of a b***h’ and a ‘pig’

Towards the end of the clip, the trainer asks: ‘Can I get your phone number?’ – to which he replies, ‘Maybe you can get it.’

She then suggests a beer or coffee, and he replies, ‘Yeah, why not?’

When Andrea says, ‘But you don’t have a girlfriend right?’, he responds ,’No’, whereupon his girlfriend rolls her eyes.

There then follows an innuendo-laden conversation between the two about ‘meat’.

Cue the break-up phone call from one very angry partner…

After he denies everything, she screams down the line: ‘You are a son of a b***h!’

It is not clear whether the episode is genuine.