Enjoying a relaxing glass of wine at the end of the day or with an evening meal is something many parents do, despite the fact the kids are around.

While research shows children are adversely affected growing up where heavy alcohol use is prevalent, those who drink responsibly say healthy role modelling teaches responsible attitudes.

Talking about the issue on the Today show, Georgie Parker spoke with mum and Nine Kitchen editor Jane de Graff and Michael Thorn, CEO of the Foundation of Alcohol Research and Education in order to get their views on the controversial topic.

The debate started with a question directed to Ms de Graff asking if she and her husband drank in front of their two boys, aged four and six.

‘At the risk of sounding like a terrible parent, yes we do, we drink in front of our children, and we always have done ever since they were very little.

‘But I believe very strongly if you’re role modelling good behaviour with alcohol and good ways of interacting with it, it’s probably not a bad thing.’ 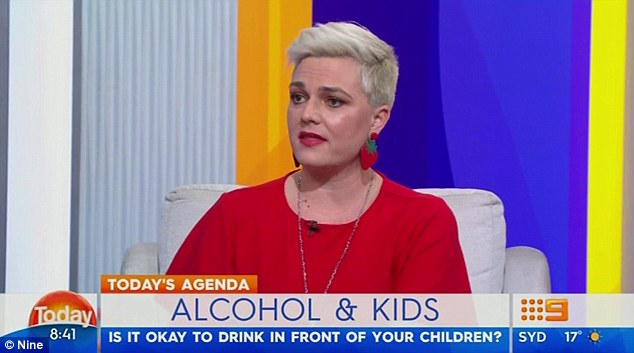 Ms de Graff said she believed taking a responsible approach would help her children to understand how to better interact with alcohol when they were older.

The mum-of-two said the extent of drinking in her household was limited to a drink on a Thursday or Friday night, or when friends come over for a meal.

‘I am certainly not sitting there on a Tuesday night going “Oh, I’m killing for a drink”. We think very seriously about the way we talk about alcohol and when we do have a drink it’s in what we believe is a very responsible way.’ 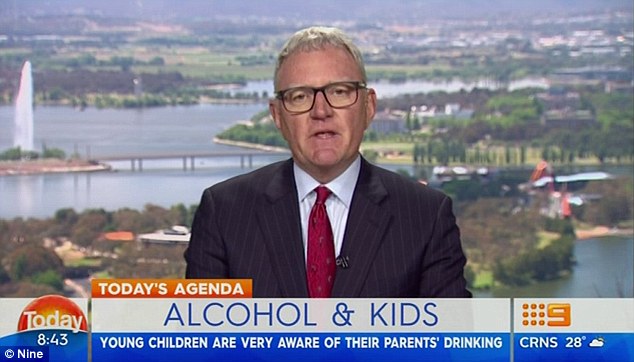 Michael Thorn, CEO of the Foundation of Alcohol Research and Education (pictured) said research has shown children exposed to alcohol earlier in their life tend to drink sooner

Children and alcohol: the guidelines

The National Health and Medical Research Council National Guidelines state parents and carers should be advised that children under 15 years of age are at the greatest risk of harm from drinking and that for this age group, not drinking alcohol is especially important

The NHMRC guidelines also state children under 15 should not drink at all, as they are at the greatest risk of harm.

Studies show the most dramatic changes occur in the brain during the teenage years; in fact the brain does not stop developing until the age of 25

Adding another perspective to the conversation was Michael Thorn, CEO of the Foundation of Alcohol Research and Education.

He added parents were fundamental in shaping their child’s views and beliefs through role modelling – and this also extended to drinking behaviour.

He explained other research had also shown children exposed to alcohol earlier in life tended to drink sooner and have more problems with alcohol later in life.

‘We know from some studies that kids from the age of three can start to understand the circumstances under which or where alcohol is consumed – whether that’s a celebration or an argument that leads to a domestic incident.’

‘It is about modelling behaviours and being terribly responsible about that,’ he added.

The question of how culture played a role in regards to how children viewed alcohol was also factored into the debate.

‘In our family growing up it wasn’t hidden from us,’ Ms de Graff said. ‘It was part of a meal usually or part of a celebration.

She explained the rule in her house was you waited for wine to be offered and enjoyed this as part of a meal interaction or group celebration. 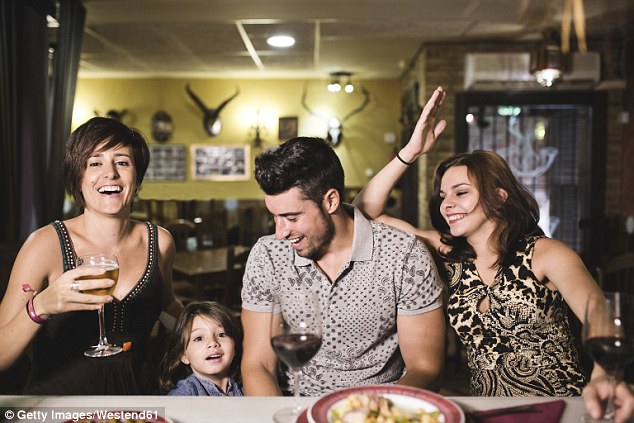 Mr Thorn also said there was evidence to suggest a European approach to drinking a small amount of alcohol with meals was less problematic.

However, he did note Australia has a heavy binge drinking culture compared to other nations so there needed to be some care taken with this.

He said while historically there had been a prevalent idea that introducing children to alcohol early by offering them small sips wasn’t a problem, science now shows alcohol has an effect on the developing brain.

‘Parents are now less inclined to give their kids alcohol, and I think that’s a good thing.’