The Today show cast transported its viewers to Las Vegas this morning while dressing up as some of Sin City’s most well-known faces for a fun-filled Halloween spectacle.

Co-hosts Hoda Kotb and Savannah Guthrie offered up tricks and treats as they transformed into Cirque du Soleil performers, a feat which saw them dangling from the air in acrobatic rings while being spun around by several of the circus show’s cast members.

Kotb, 58, failed to mask her terror as she was whipped around in the air – while Guthrie, 50, looked more than happy to play to the crowds as she hung back on the apparatus and waved her hand in the air.

As well as Cirque du Soleil, the cast paid tribute to several other famed Las Vegas performers from over the years, with Jenna Bush Hager, Al Roker, and Willie Geist all putting their singing skills to the test by dressing up as Celine Dion, Sammy Davis Jr, and Elvis Presley, respectively.

Bush Hager, took inspiration from Dion’s performance at the Bellagio Fountain, donning a floor-length beaded dress and a sheer cape for her costume – while her blonde locks were blown out in glamorous waves that blew around her face as she belted out the songstress’s 1996 hit It’s All Coming Back to Me Now. 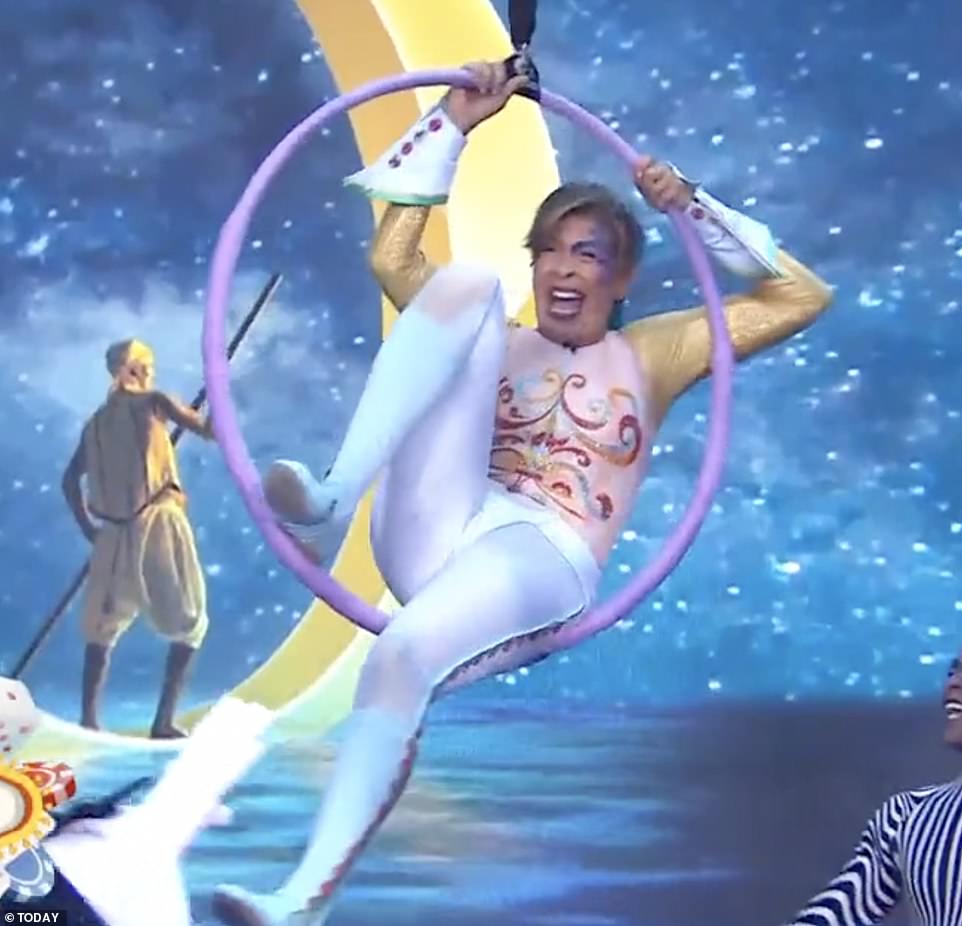 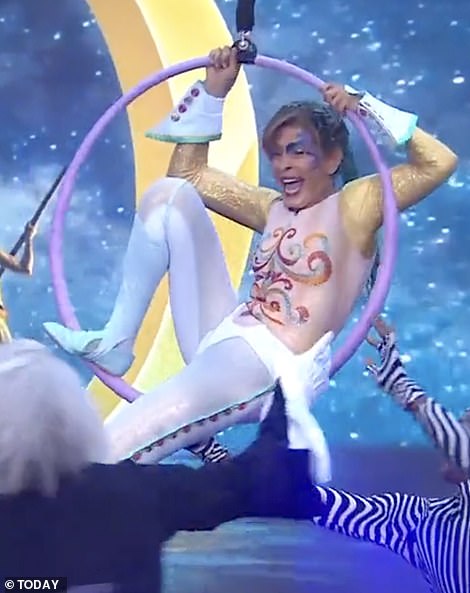 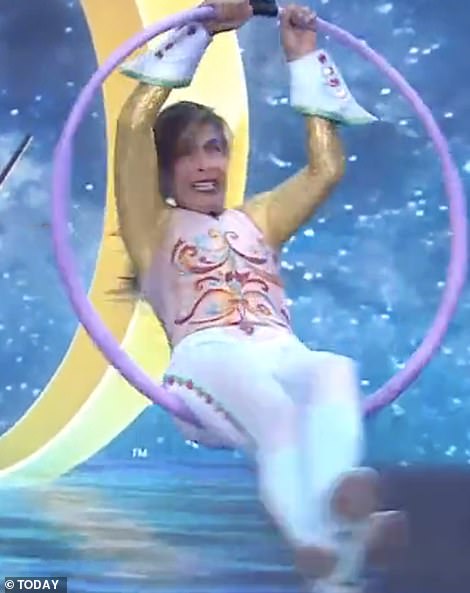 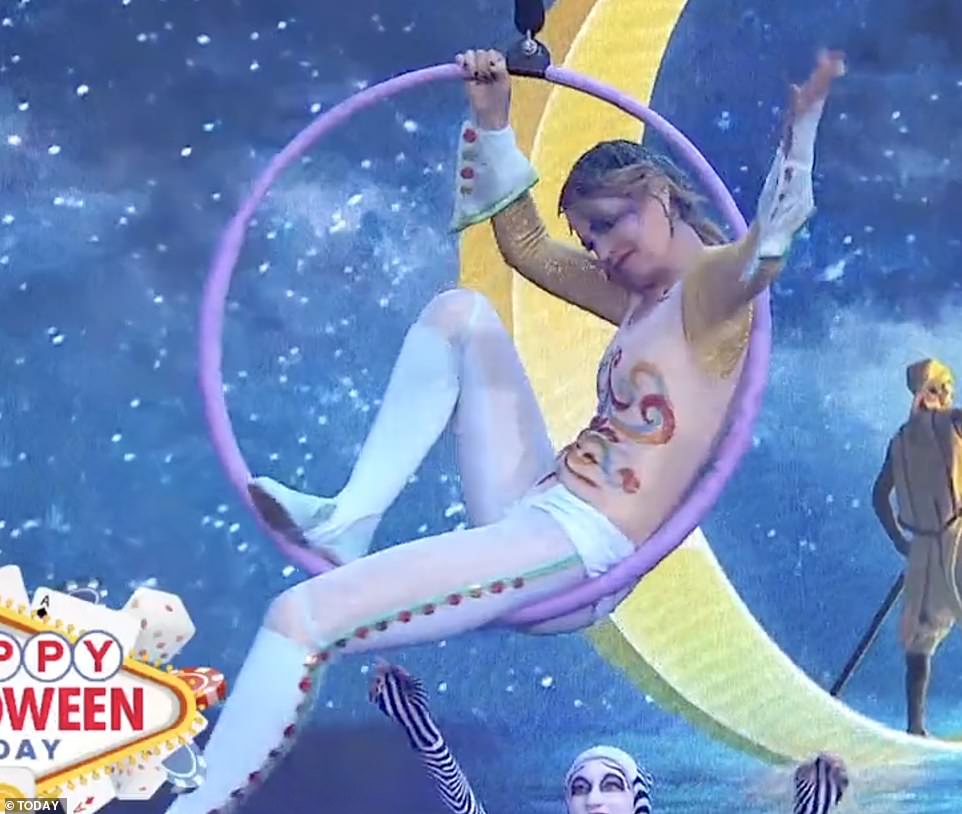 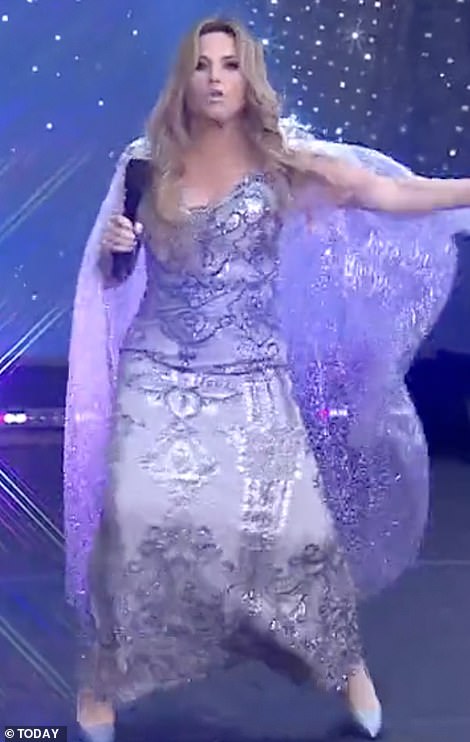 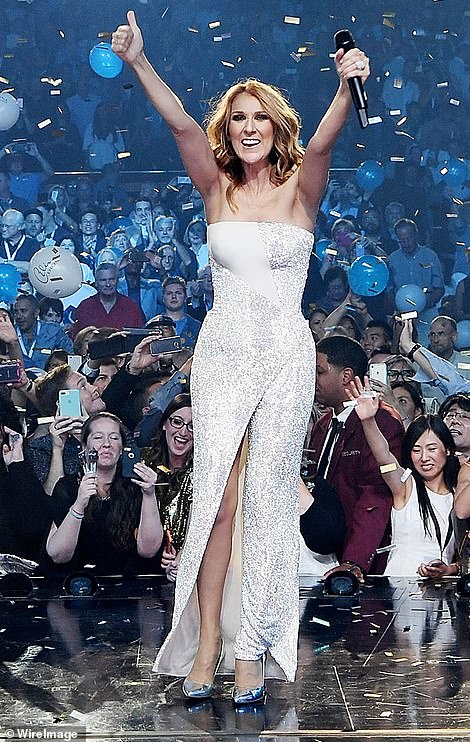 The mother-of-three looked every inch the pop diva as she performed a very dramatic rendition of the singer’s hit – holding up her hands towards the camera and throwing her head back at certain points during the song, while belting the lyrics into her microphone.

Roker, 68, wore a classic black suit and donned a wig in order to transform into The Candy Man, dancing his way across the stage as he performed Davis Jr’s most popular hit song.

Meanwhile Geist, 47, opted for Presley’s signature white jumpsuit as he wiggled his hips and thrust around the stage during a performance of Burning Love.

Carson Daly pulled double duty for the Vegas-themed skit, transforming first into an open-top bus tour guide in order to serve as the MC of the show, introducing each ‘act’ as they made their way onto the stage.

The 49-year-old then tried his hand at some Sin City-style magic, stepping into the shoes of famed illusionist David Copperfield, before bringing out his assistant – Dylan Dreyer – who he proceeded to levitate in the air, much to the delight of the Today live audience.

Dreyer donned a dark bob wig for her performance, pairing the slick ‘do with a sparkling black jacket, matching pants, a shimmering tie, and a corset belt.

And of course, it wouldn’t be Vegas without at least one wedding at the Little White Chapel – with Today hosts Kristen Welker and Peter Alexander stepping up to the plate to play Jennifer Lopez and Ben Affleck, who tied the knot in Sin City earlier this year. 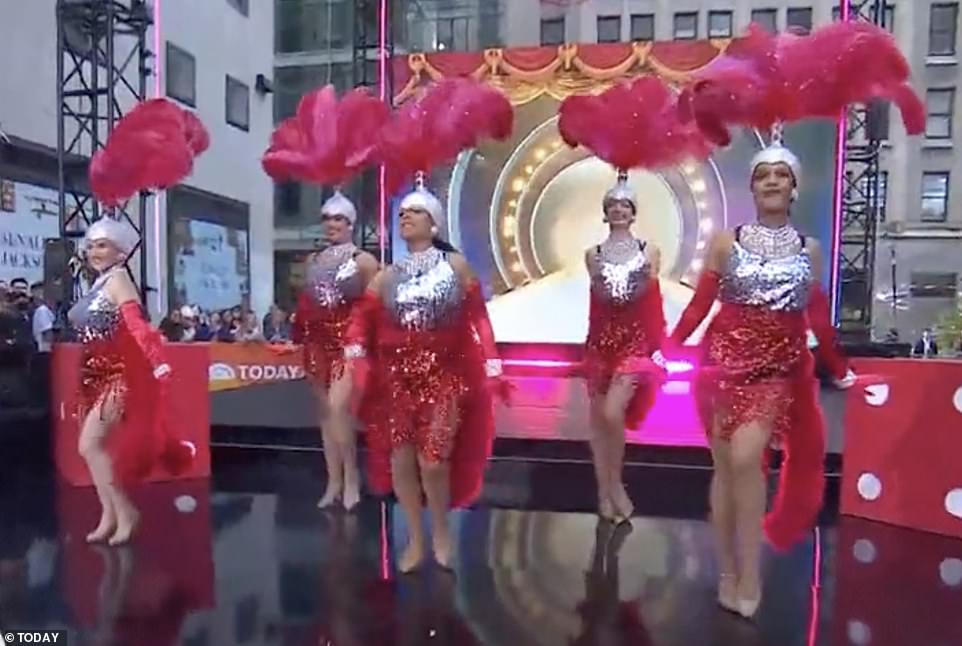 Sheinelle Jones kicked off the Halloween spectacle by performing as a Las Vegas showgirl, even doing a full tap routine with several real-life dancers 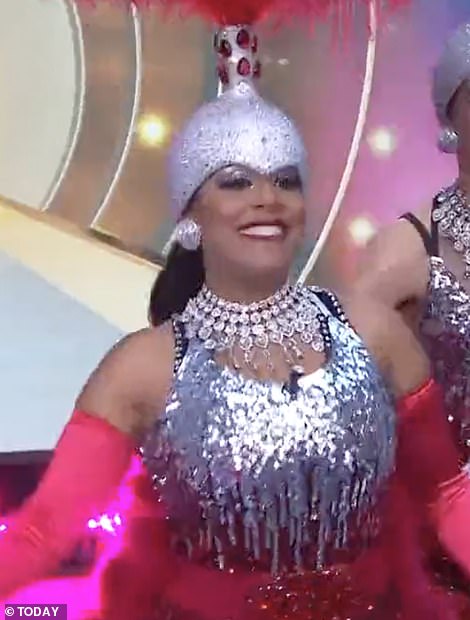 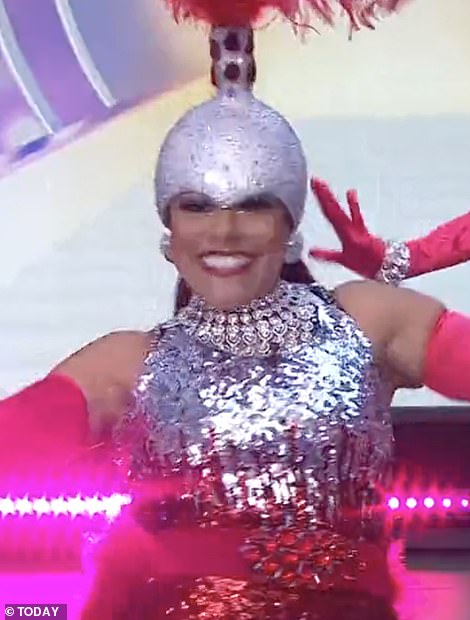 The 44-year-old certainly looked the part in her glitzy outfit and impressive headdress – and she appeared to be having a ball up on stage, where she was seen smiling happily while performing her routine 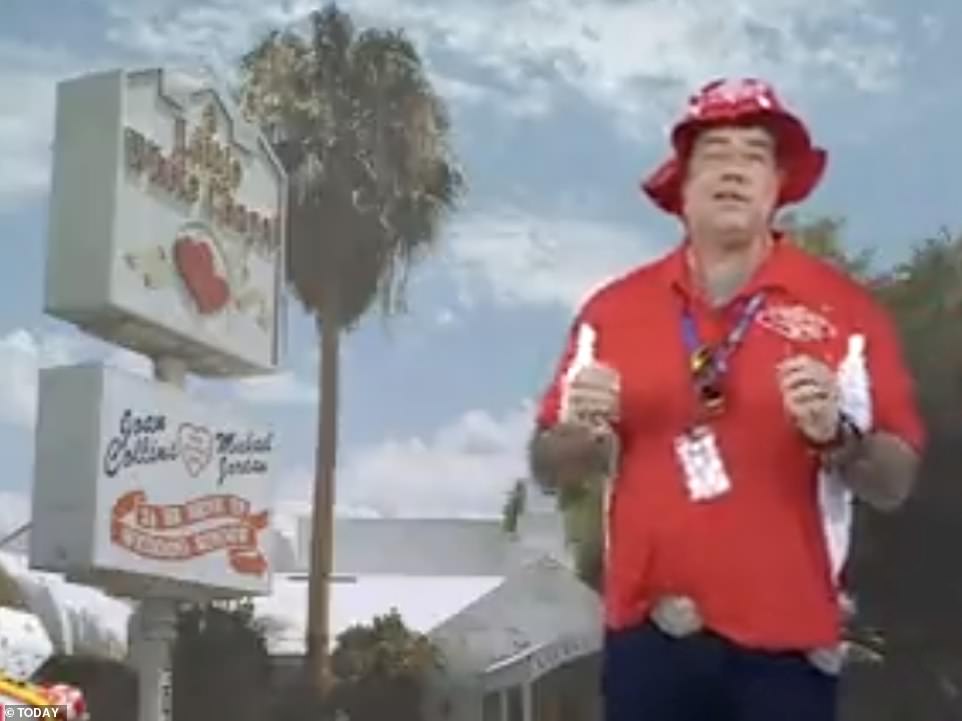 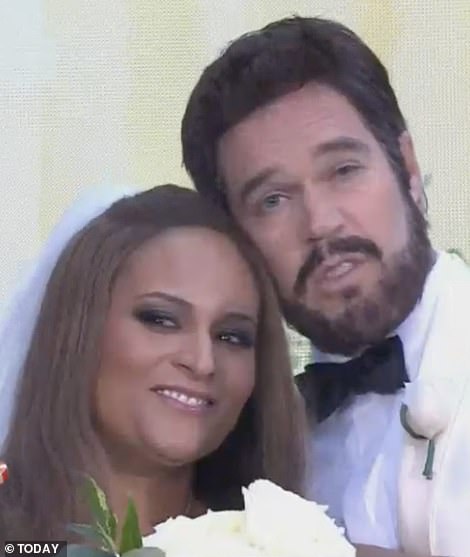 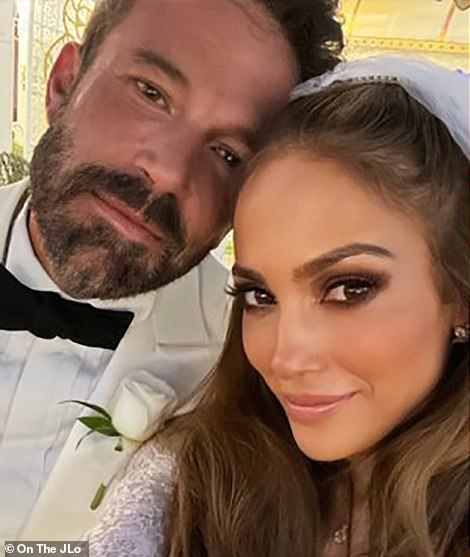 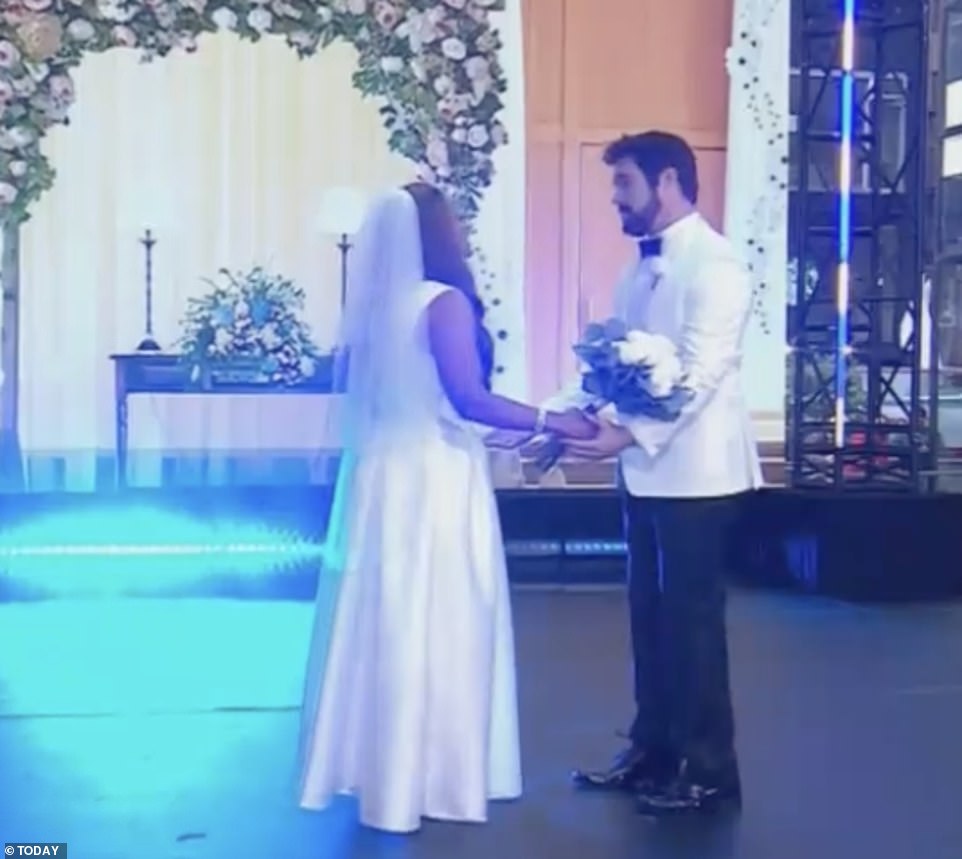 The pair donned the same ensembles worn by Bennifer at their July wedding, with ‘J-Lo’ opting for a sleeveless white dress and simple veil, while ‘Ben’ donned a white tuxedo jacket, black bow tie, and black trousers 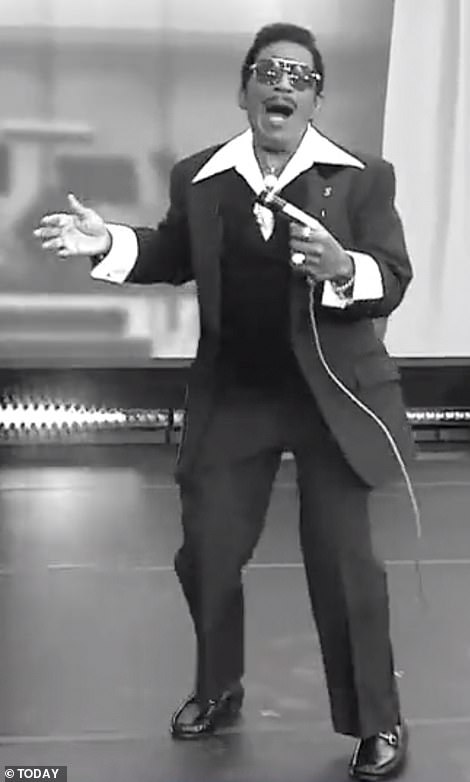 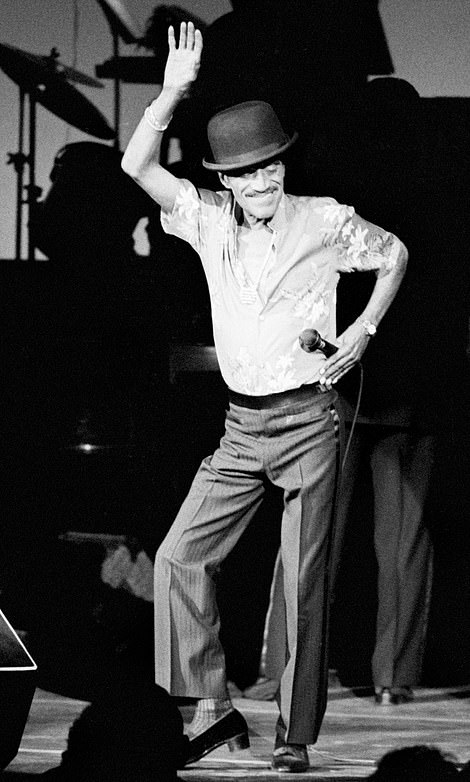 Alexander even added fake facial hair to his look to fully embody Affleck – and Welker had her long locks styled in the same chic ‘do as Lopez did for her wedding day.

From one Vegas institution to another: Sheinelle Jones upped the ante by donning a spectacular feather headdress and sequined ensemble to transform into a traditional showgirl, even treating the audience to a dancing performance alongside several real-deal performers.

Last, but by no means least was Craig Melvin, who channeled boxing legend Muhammad Ali, donning a red robe with the sport star’s name on the back, as well as a dark wig, and a pair of white boxing shorts.

Rather than try to compete with Ali’s impressively toned figure, Melvin, 43, opted to wear a T-shirt with abs printed on them – which he paired with a large championship belt.

Today’s annual Halloween show has been a popular tradition for year – with the cast choosing a different theme for the spooky season each year. 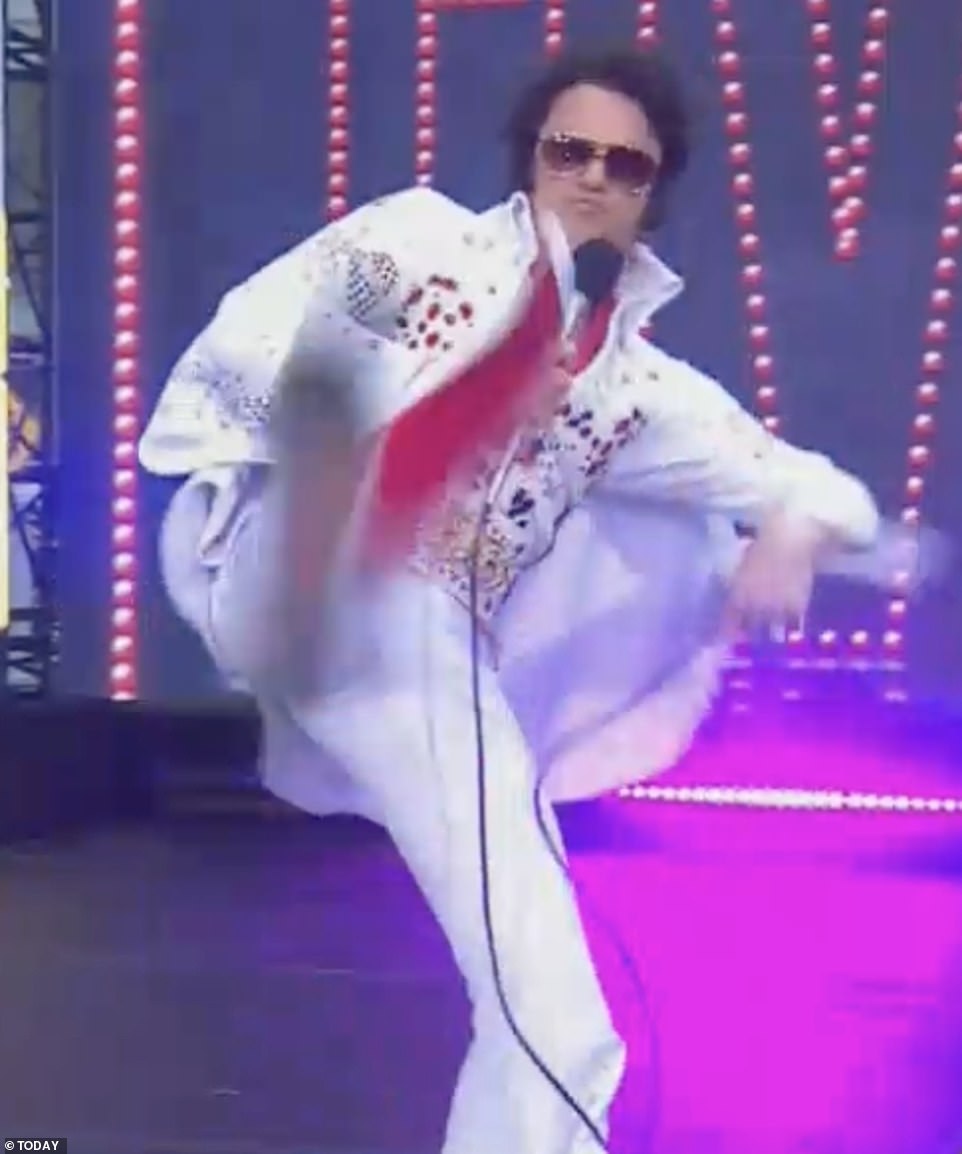 Willie Geist, 47, dressed up as Elvis Presley for a dynamic performance that saw him wiggling and thrusting his hips while mirroring the rock n roll king’s signature moves 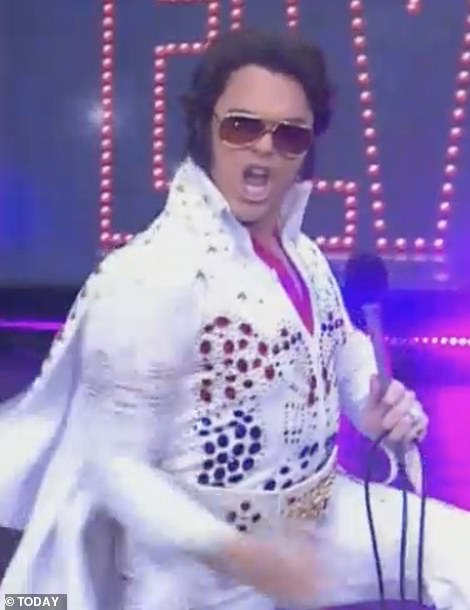 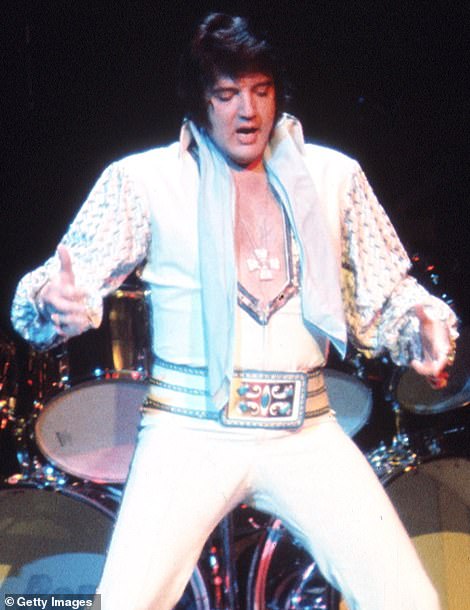 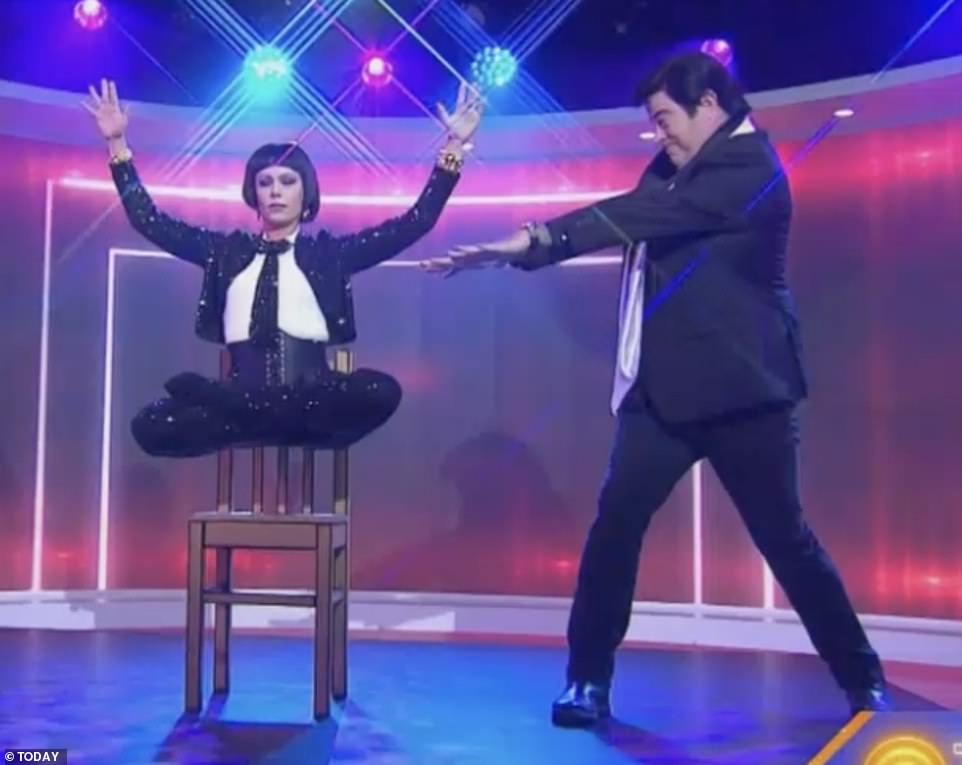 Daly pulled double duty on the show – not only serving as the tour guide MC, but also transforming into illusionist David Copperfield, even making his assistant ‘Adelaide’, played by Dylan Dreyer, levitate in the air 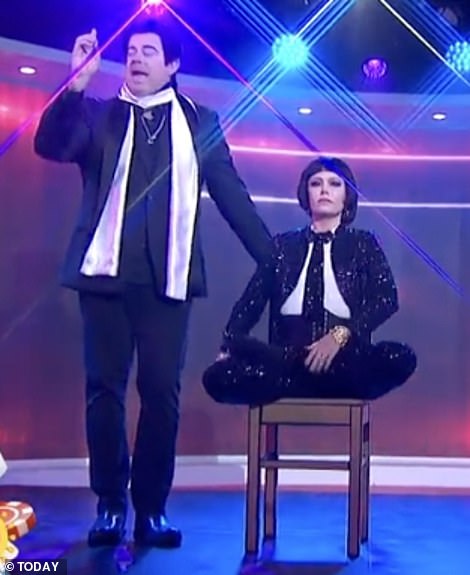 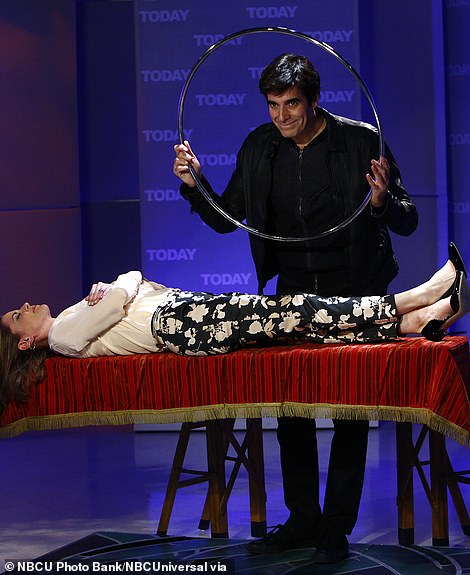 For years, the morning show went head-to-head with its ABC rival Good Morning America, however in recent years, the GMA hosts have opted out of the competition, choosing to eschew on-air costumes in favor of more low-key Halloween celebrations, including cooking segments and animal costume fashion shows.

However, the Today show hosts have forged ahead with their annual get-ups – last year choosing to follow a football theme, which saw Guthrie and Hager dressing up as Dallas Cowboys cheerleaders. And it wasn’t just the dancers’ skimpy outfits that the two women took on – they also performed alongside members of the actual squad, kicking up their heels while doing the can-can with the women.

Preparation for the annual show begins weeks in advance, with the hosts often seeking help, training, and advice from real-life counterparts before taking on the roles on-air.

Ahead of this year’s Halloween fun, Guthrie and Kotb got a helping hand from several members of the Cirque du Soleil cast, who helped to prepare them for their acrobatic performance. 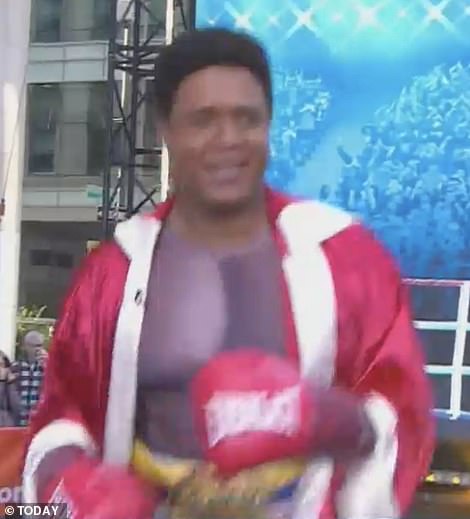 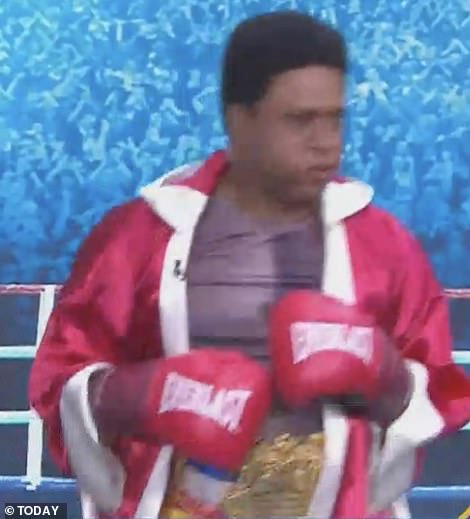 Craig Melvin dressed up as boxing legend Muhammad Ali – donning a pair of red boxing gloves, a red robe – and a T-shirt with ripped abs printed on the front of it 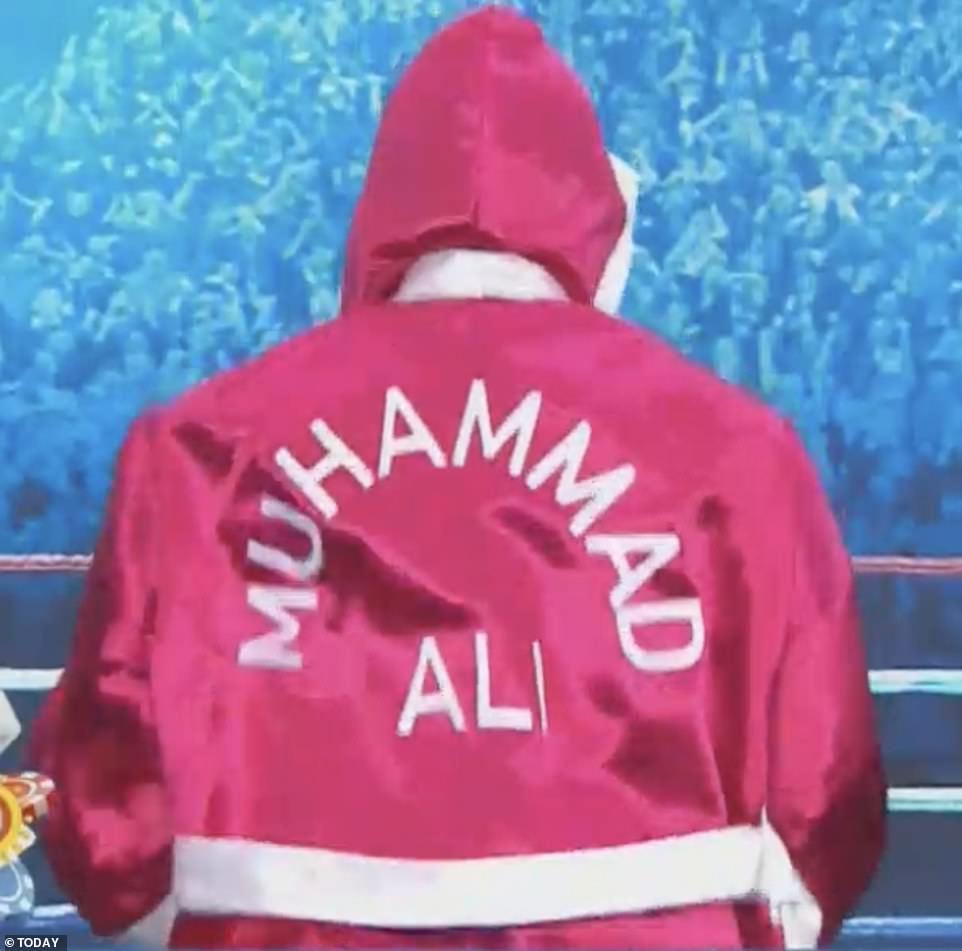 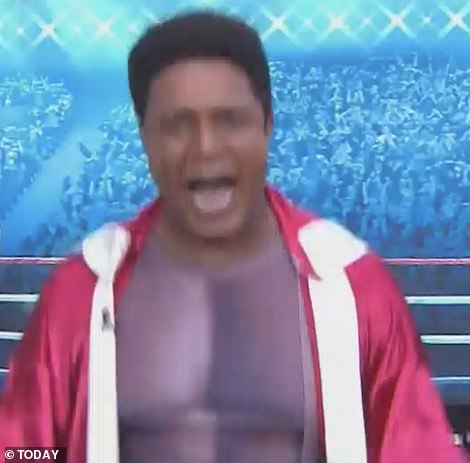 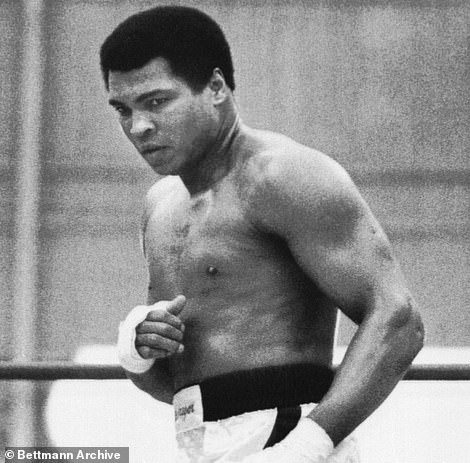 Ali – who passed away in 2016 – fought in Las Vegas seven times, and he is credited with helping to turn Sin City into one of the most popular boxing venues in the world

Dressed up in white leotards that featured dazzling embellishments, the two women sat in their rings, while cast members from the circus show spun them around in the air – much to Kotb’s horror.

The mother-of-two looked petrified as she was whipped around, while Guthrie happily leaned back and waved to the crowds during her performance.

However, Kotb insisted that she’d had ‘so much fun’ during her performance, although she later added: ‘I’m really dizzy.’

Copperfield tipped his hat to Daly’s portrayal of him, phoning into the Today show later on during the segment in order to offer his congratulations to the morning show host.