Extraordinary moment Today host Allison Langdon on tells a hospitality worker he should ‘GET A JOB in another industry’ – as Australia faces its worst jobless crisis in decades with 1.3 million already unemployed

Today host Allison Langdon told a hospitality worker to consider getting a job in a different industry after he raised concerns about workers’ safety during COVID-19.

The breakfast presenter made the comment to worker Lawrence Sadler, who is also a Hospo Voice union representative, on Friday morning after he told the Today Show about industry health and safety concerns.

The remark was met with an awkward laugh and silence, before Ms Langdon quickly moved onto the next segment on the breakfast TV program.

Figures released on Thursday revealed 600,000 Australians have lost work since the pandemic began, but the figure is thought to be much higher at 1.3million.

Mr Sadler said the industry is already plagued with issues without the added concern of staff contracting coronavirus.

‘Hospitality is a really raw deal for workers. It often exploits the most vulnerable member of our society that is young and migrant workers… It’s a really quite a dodgy industry for workers and we need to be vigilant against bosses who are willing to rort the rules to get a profit,’ he said.

‘Well maybe you should get a job in another industry then,’ Ms Langdon said.

The United Workers Union which oversees ‘Hospo Voice’ believes a decision to ease lockdown restrictions will put workers’ safety at risk because of a lack of regulated health and hygiene measures. 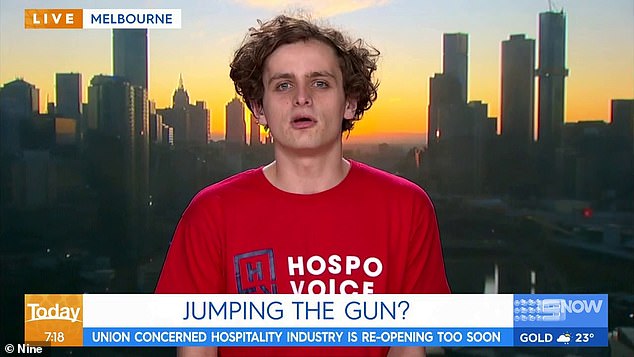 Mr Sadler said ‘the rush’ to return to jobs is a ‘dangerous step’ considering COVID-19 is still in the community.

‘Social distancing is really impossible for us and that’s excluding the risk of an infection from a customer which will only increase now that businesses are reopening,’ he said.

The hospitality sector is preparing for a big weekend as many states and territories across Australia begin to ease lockdown restrictions.

New South Wales, Queensland, the Australian Capital Territory, Western Australia, the Northern Territory and Tasmania will all progress plans to reopen cafes, bars and restaurants from today as part of a federal directive to get the economy moving.

Employment data from the Australian Bureau of Statistics released on Thursday revealed Australia’s unemployment rate had surged to a five-year high due to the COVID-19 pandemic.

Official figures recorded the loss of 600,000 Australian jobs since mid-March, but its’ thought to be closer to 1.3 million, reported ABC news.

Woolworths’ recruitment website crashed last month after it was flooded with job-hunters laid of across the country. 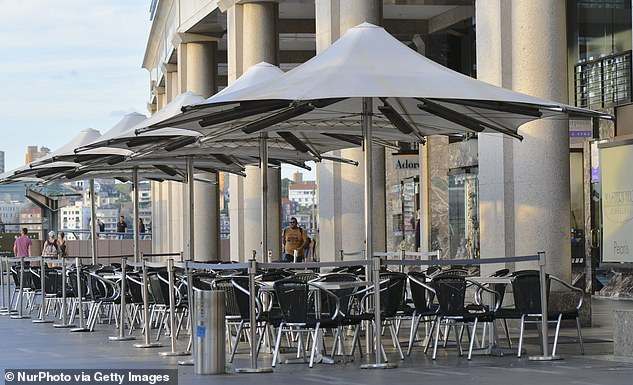 The hospitality sector is preparing for a big weekend as many states and territories across Australia begin to ease lockdown restrictions (Pictured: an empty restaurant at Sydney’s Circular Quay)