CHICAGO (AP) – Todd Frazier hit a grand slam and drove in a season-high five runs to lead the New York Mets to a 10-3 victory over the Chicago Cubs on Wednesday, avenging a tough loss earlier in the day.

Frazier gave New York a 4-0 lead in the first inning with his drive against Alec Mills (0-1) and added an RBI single in a two-run ninth.

Jason Vargas (5-8) won his third straight start. The Mets had 16 hits and avoided a season sweep after dropping the first six games against the NL Central leaders.

New York Mets’ Todd Frazier (21) hits a grand slam during the first inning of a baseball game against the Chicago Cubs on Wednesday, Aug. 29, 2018, in Chicago. (AP Photo/Matt Marton)

Victor Caratini hit a two-run homer for Chicago in the ninth.

The Cubs had won a season-high seven in a row after pulling out a 2-1 victory earlier on Ben Zobrist’s RBI single with the bases loaded in the 11th. That game was suspended in the top of the 10th because of rain the previous night.

In the suspended game, Zobrist grounded the winning single up the middle off Daniel Zamora with one out in the 11th after Chicago loaded the bases against Paul Sewald (0-5). Jesse Chavez (5-2) got the win with a scoreless 11th, and Anthony Rizzo matched a career high with four hits.

HOUSTON (AP) – Tyler White homered with one out in the ninth inning to lift Houston past Oakland.

White, who also homered Monday, sent a pitch from Jeurys Familia (4-1) to the seats in left field. The Astros won two of three games in the series to move 2 1/2 games ahead of Oakland atop the AL West.

George Springer and Alex Bregman added two hits apiece and both drove in a run to help the Astros to their seventh win in eight games. Roberto Osuna (2-2) allowed one hit in a scoreless ninth.

The Astros lost the lead in the seventh when Brad Peacock took over for starter Dallas Keuchel and struggled with location. Peacock walked Matt Chapman, Jed Lowrie and Khris Davis to load the bases before plunking Stephen Piscotty on the arm to tie it at 4.

Duffy (8-11) gave up both hits and his only run in the first inning, when Mikie Mahtook drove in Jose Iglesias with a two-out single. The left-hander labored through the frame but breezed the rest of the way, striking out six while working around a trio of walks.

Alex Gordon hit a two-run homer and Brett Phillips had a pair of RBIs as the Royals pounded Tigers starter Michael Fulmer (3-10) in his second outing off the disabled list.

Mahtook homered off Wily Peralta in the ninth for Detroit.

SAN DIEGO (AP) – Hunter Renfroe homered and drove in four runs, Manuel Margot had a homer among his three hits and prized rookie Luis Urias had his first three hits for San Diego, helping the Padres beat Seattle for a two-game sweep.

The offensive outburst made a winner of rookie left-hander Joey Lucchesi (7-7), who stayed in the game after needing a few minutes to recover from Ryon Healy’s comebacker that glanced off his glove and then his groin. The big southpaw held the Mariners to one run and six hits in a career-high 6 2/3 innings, matched his career-best with nine strikeouts and walked two.

Eric Hosmer also had three hits for the Padres, who worked over Mariners starter Erasmo Ramirez (1-3) for seven runs and nine hits in three innings. 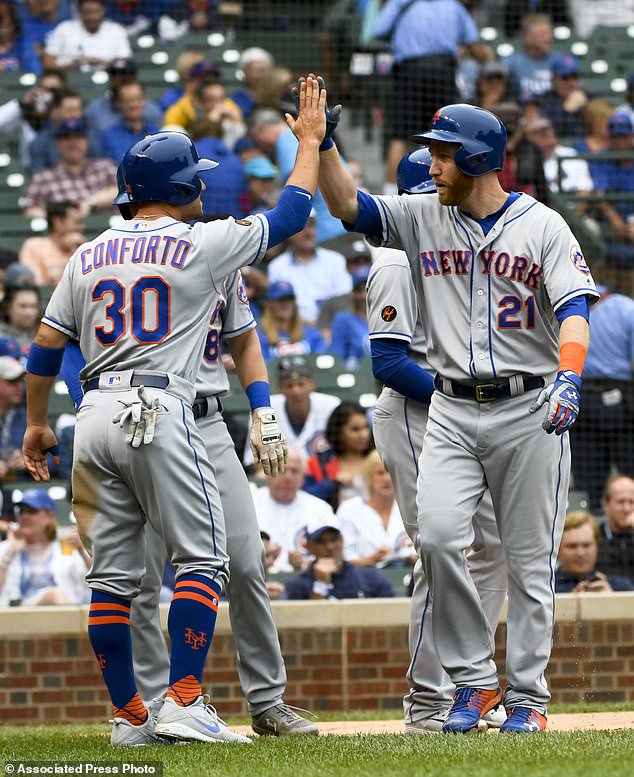