Todd Payten had a perfect response when his post-game press conference was unexpectedly interrupted on Saturday.

The North Queensland coach was talking to reporters along with Cowboys captain Jason Taumalolo following their 36-16 win over Newcastle, when one of the phones placed in front of them by journalists attending the press conference went off.

Payten made light of the situation and nonchalantly picked up the handset to answer the call.

An already hilarious situation took an even more comic twist, when he informed the reporters that the caller was none other than Cowboys legend Laurie Spina.

The 58-year-old captained North Queensland in their inaugural NRL season and currently works for the ABC.

‘Give us five minutes, OK?’ 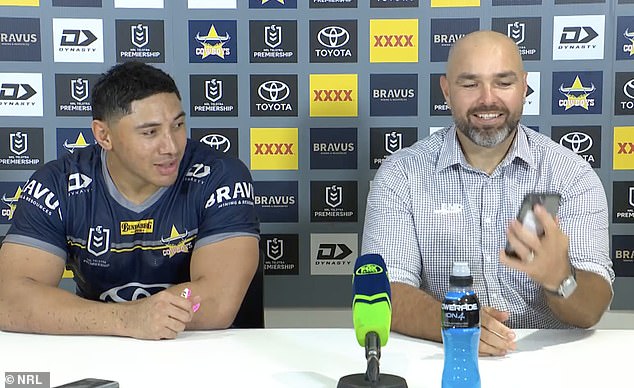 As the phone went off, Payten told reporters the caller was former Cowboys great Laurie Spina, who captained North Queensland in their inaugural NRL campaign

Payten, however, was in no mood to laugh when he discussed what he perceived inconsistencies in the way the Bunker operates.

Cowboys skipper Jason Taumalolo was denied a try 15 minutes from time when Jeremiah Nanai was adjudged to have obstructed Lachlan Fitzgibbon.

‘It’s consistently ruled too inconsistent. […] That’s why I’m so confused,’ he said. 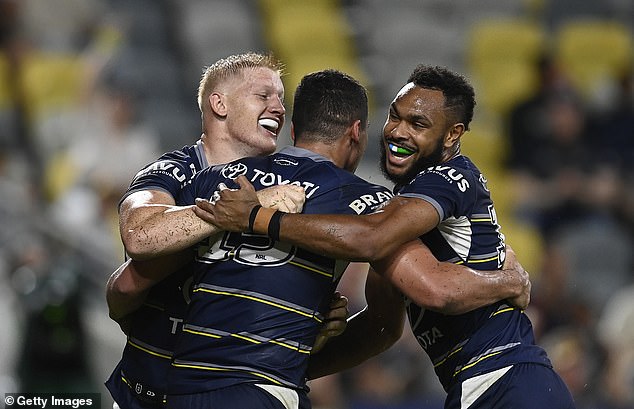 ‘It’s different from game to game and that’s what I don’t like.

‘The Bunker is there to make the right decisions and we’re just not getting enough of them.’

The decision ultimately did not prove costly for the Cowboys, who clinched a fourth consecutive win courtesy of a second half blitz during which they scored four unanswered tries.