A toddler has been diagnosed with Australia’s first case of drug-resistant typhoid.

The 20-month-old girl was admitted to the Children’s Hospital at Westmead, in western Sydney after a three-month trip to Pakistan.

She had presented to the hospital with typhoid fever symptoms after already receiving two rounds of antibiotics.

Typhoid fever is a disease caused by the bacteria Typhi. In Australia, most typhoid infections are acquired overseas by individuals eating contaminated food or water in developing countries while visiting friends and relatives or travelling.

The toddler’s case from February was the first known extensively drug-resistant typhoid case in Australia and researchers findings was published in the Medical Journal of Australia on Monday.

The young girl had experienced diarrhoea during her time in Pakistan and continued despite the use of oral antibiotics prescribed locally in Pakistan, the report said.

Dr Philip Britton from the Children’s Hospital at Westmead and the University of Sydney told the Sydney Morning Herald it wasn’t until they grew from her bloodstream that they became aware it was a highly resistant form. 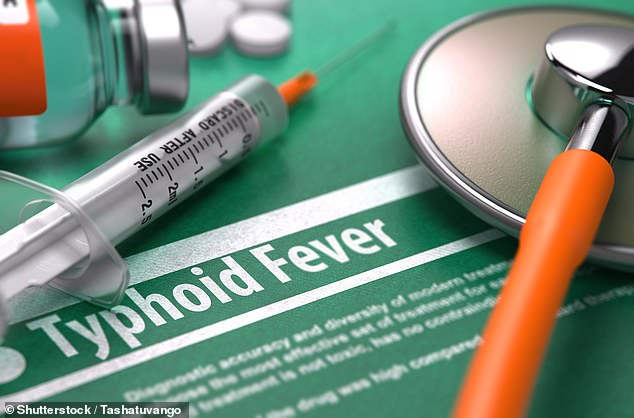 Typhoid fever is a disease caused by the bacteria Typhi. In Australia, most typhoid infections are acquired overseas by individuals eating contaminated food or water in developing countries while visiting friends and relatives or travelling

The bug has been associated with an outbreak of this extensively drug-resistant typhoid in Pakistan and western India, he said.

He said he was nervous about where ‘this is all heading into the future’ it it took three rounds of antibiotics to cure the girl.

He said it was important to vaccinate against typhoid as prevention is always better than a cure.

The World Health Organization (WHO) has previously warned if nothing is done the world is heading for a ‘post-antibiotic’ era.

Figures estimate that superbugs will kill 10 million people each year by 2050, with patients succumbing to once harmless bugs.

In September, the WHO warned antibiotics are ‘running out’ as a report found a ‘serious lack’ of new drugs in the development pipeline.

Without antibiotics, C-sections, cancer treatments and hip replacements will become incredibly ‘risky’, it was said at the time.