A toddler who swallowed a battery was forced to spend a week in intensive care after the acid burnt through her oesophagus and left her vomiting black gunk.

Abigayle Galle, now two, put the battery in her mouth on July 18 after her father Jeff Galle, 26, bought it for his watch.

The sanitation worker watched in horror as the then 15-month-old retched and screamed out in pain, with him being oblivious to what had just happened.

The youngster was rushed to A&E, where an X-ray revealed she had swallowed a circular object, which doctors initially believed to be a coin.

Abigayle was airlifted to Cook Children’s Medical Center in Fort Worth, where medics discovered the lodged object was actually a battery and needed removing immediately.

The battery was taken out, and the youngster, of Abilene, Texas, spent two-and-a-half weeks on a feeding tube. Now home, she still suffers from breathing and digestive difficulties.

Abigayle Galle spent a week in intensive care after swallowing a battery meant for her father’s watch. The acid burnt through the youngster’s esophagus. She is pictured after the ordeal 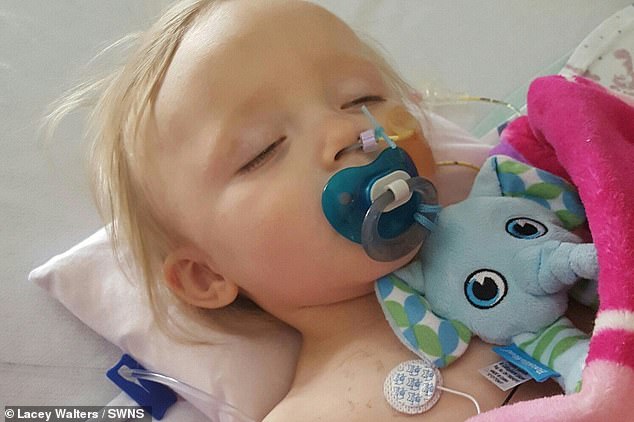 After the battery was removed in emergency surgery, Abigayle spent two-and-a-half weeks in hospital on feeding tubes (pictured) before she was able to eat properly 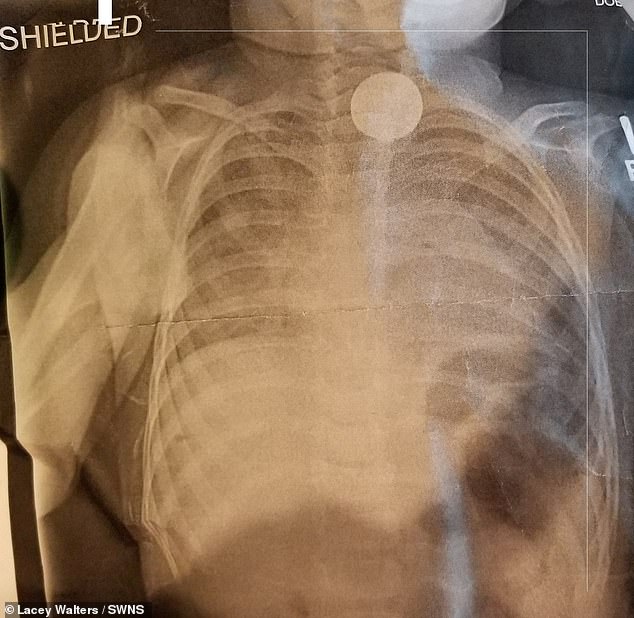 X-ray reveals the circular battery in her oseophagus, which was initially thought to be a coin

Abigayle’s mother Lacey Walters, who is a stay-at-home mum-of-four, said: ‘Abigayle’s dad had gotten a new battery for his watch but it ended up being the wrong size.

‘He left it on his computer desk where Abigayle got her hands on it. Jeff was watching her while I was out trying to run some errands.

‘He called me up, and said she was crying and trying to throw up.

‘I hurried home straight away and I watched her for ten minutes. Her voice was growing so faint and weak. It was clear she was hurting.’

Abigayle was initially taken to Hendrick Medical Center’s A&E department on the north side of Abilene, where the family waited for an hour to be seen, according to their GoFundMe page. This was set up to cover travel costs to the hospital.

Growing impatient, the youngster’s grandmother Missty George, 45, a healthcare worker, rushed Abigayle to ‘the south side ER’, where she was seen immediately.

‘She was taken in for an X-ray and it looked like she had a quarter stuck in her throat,’ Ms Walters said. ‘It was lodged in her airway, which was making it difficult to breathe.

‘She started throwing up and it was terrifying. It was black.’

After doctors quickly looked her over, Abigayle was airlifted to Cook Children’s Medical Center, which is a two hour drive from the family’s home.

Medics then discovered the ‘coin’ was in fact a battery and Abigayle had emergency surgery at 4.30am. 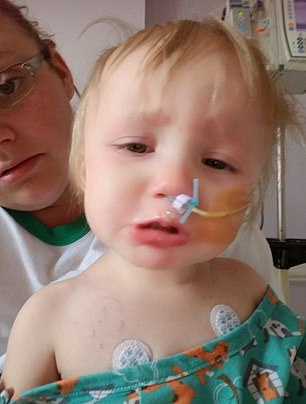 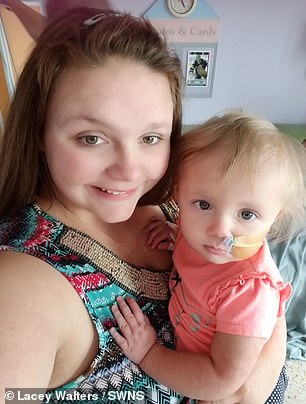 After weeks on feeding tubes (pictured left), Abigayle is home but still suffers from breathing and digestive difficulties. Unsure whether her daughter would recover, mother Lacey Walters (pictured together right) was ‘so worried’ and could not even see the youngster before surgery 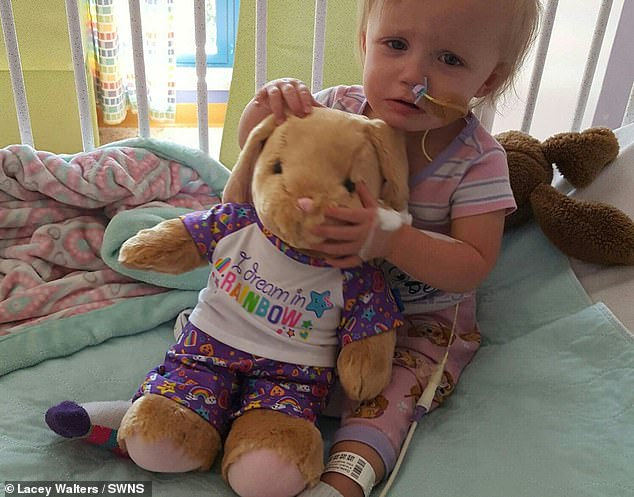 The battery acid partially burnt through Abigayle’s esophagus wall, leaving her in severe pain. She is pictured in hospital recovering after surgery to remove the lodged object

‘The doctor told us it had to come out immediately,’ Ms Walters said.

‘She was rushed into surgery. We didn’t get to see her before surgery because it was so urgent. I was so worried.’

Fortunately, the battery’s acid had not burnt completely through Abigayle’s esophagus wall. But the toddler still had to be fitted with a feeding tube until her gullet healed.

‘They said if the battery had been in there any longer it would have been catastrophic,’ Ms Walters said.

‘Sometimes when she sleeps she makes these scary gasping noises, and she has problems with choking and swallowing.

‘We cut up Abigayle’s food really finely now because she has trouble.’

According to the American Academy of Pediatrics, more than 3,500 incidents of button battery ingestion are reported to US poison control centers each year.

Ms Walters is urging other parents to be extremely cautious with where they leave batteries around the house.

‘I’ve become extremely protective and I am overly careful about everything now,’ she said. ‘I could have never imagined a little battery could cause so much damage.

‘I would urge other parents to be extremely careful with batteries. They are in everything.’ 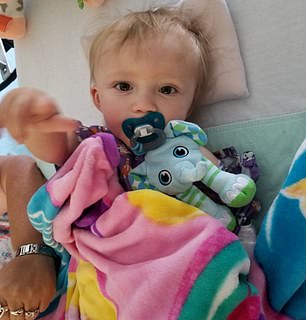 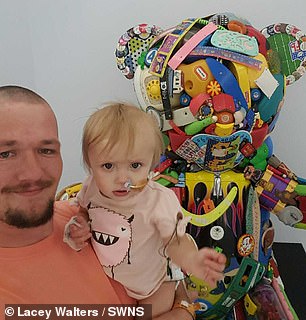 Pictured left in hospital, Abigayle still makes gasping sounds when she sleeps and has difficulty swallowing. Her father Jeff Gale (pictured right together) watched in horror as his daughter began retching and screaming in agony. He was oblivious to what had happened