Tokyo Olympics: Australian Boomers prepare to take on US for a place in the gold medal game

The Australian Boomers are ready for another epic showdown against basketball heavyweights and defending Olympic champions USA.

Patty Mills was quick to remind his Boomers teammates they ‘hadn’t done s**t yet’ after dominating Argentina to set up an Olympic semi-final against the United States in Tokyo.

In his fourth Games, Australian flag bearer Mills has made it his mission to secure the Boomers a maiden men’s basketball medal.

There was plenty to suggest they’re close in a 97-59 quarter-final dismantling of Argentina, Australia scoring the first 19 points of the final quarter to streak clear after a nervy start.

But Mills remembers a 90-64 defeat of Lithuania in the corresponding game five years ago in Rio, which came before they were eventually denied bronze in a gutting one-point loss to Spain.

They’ve finished fourth in similarly brutal circumstances at a World Cup since.

‘The message to the boys after was that we’re back where we wanted to be and it’s been a long couple of years,’ Mills said.

‘But the message is that we haven’t done s**t yet … to be able to be the best we have to beat the best and we have an opportunity in front of us to take that next step.’

The United States have won the last three Olympic titles but the gloss has faded on the once invincible outfit, Gregg Popovich’s men finishing seventh at the 2019 World Cup and losing their last two games played against the Boomers.

They were also beaten by France to begin their Tokyo campaign but have improved in every game since, Kevin Durant starring in a solid quarter-final defeat of Spain earlier on Tuesday.

The Boomers lost 98-88 to the United States in the pool stage in Rio and were beaten by 33 and 31 points in their previous two Olympic campaigns. 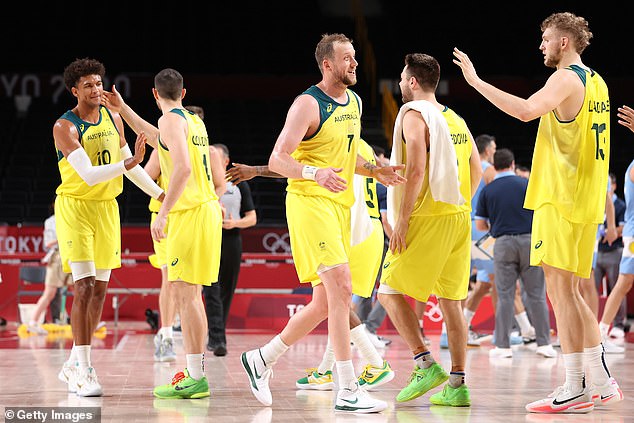 But Mills says there’s ‘plenty of reasons’ why they can turn the tables.

‘We’ve been to this stage many times and haven’t crossed the line, but we’ve bottled those experiences up,’ he said.

‘We’re well prepared for this moment and stage to make the next step.

‘There’s a togetherness and camaraderie and focus that’s sharp.

Dante Exum scored nine points for the Boomers, including a ferocious dunk to begin a dominant 37-11 final quarter as the Boomers overcame a cold start to sprint into the final four.

A nervy Australia led the quarter-final by six at half-time and 12 at the final break, then scored the first 19 points of the fourth term to send a statement ahead of their Thursday date with the three-time Olympic champions. 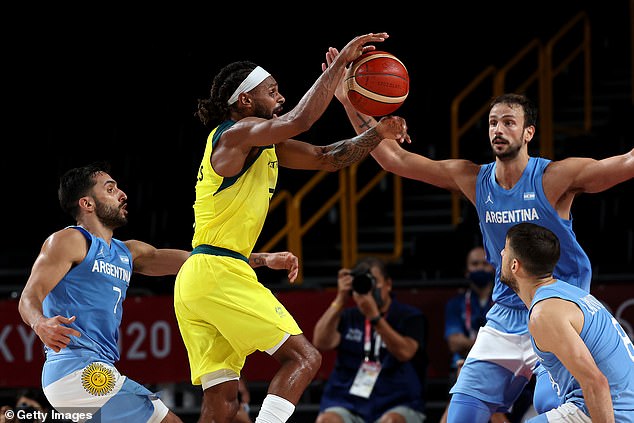 The Boomers have never medalled in an international tournament, many of this current crop involved in gutting fourth-place finishes at the 2019 World Cup an 2016 Rio Games.

Standing in their way of gold is the United States, who they beat in an exhibition game last month.

The United States also lost their Games opener to France, but have improved with every game and booked their spot in the final four by beating Spain behind a red-hot Kevin Durant.

In his fifth and final Games campaign, Scola was given a rousing reception as he checked out late in the final quarter. 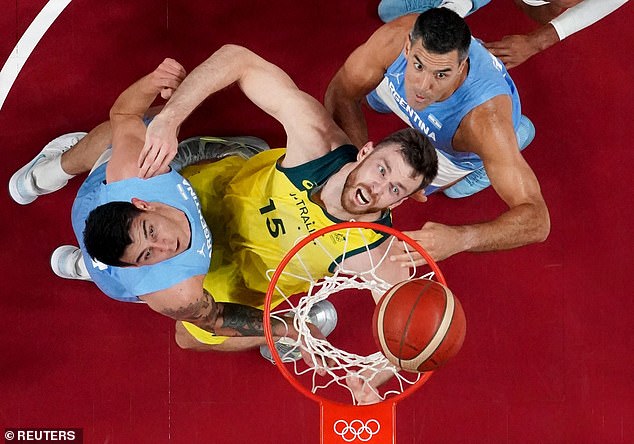 Nicholas Kay starred for the Boomers against Argentina with 10 points and 10 rebounds.

‘We’re on a mission here and we always talk about having no distractions … we’re in the trenches together and not going to let anything come in the way of that.’