The United States await the Opals after they concocted a miracle passage to the final eight in Tokyo.

Winless in their first two Olympic pool basketball games, the Opals needed to beat Puerto Rico on Monday by at least 25 points to sneak into the women’s quarter-finals, ahead of Canada on for-and-against.

Pool rivals China (97-55) and Belgium (87-52) had done so easily, but it looked far from likely when Australia conceded the first eight points of the game, trailed by one at quarter time and led by just one at halftime.

But a 51-25 second half, helped by a three-pointer and fall-away jump shot from Cayla George in the last 90 seconds, rescued the most unlikely result.

The Opals needed to beat Puerto Rico on Monday by at least 25 points to sneak into the women’s quarter-finals, ahead of Canada on for-and-against

Australia led by 24 points inside the final 30 seconds and twice curiously turned down good looks close to the basket, George eventually nailing the jump shot instead.

That put them ahead of the target for the first time, but there were still two missed Australian free throws to come, the Opals relying on Puerto Rico’s last-ditch three point effort to miss before they could celebrate.

‘I’m not sure why we came out like that,’ coach Sandy Brondello said of their slow start.

‘It was like our brains froze and we forgot what we were supposed to do … maybe it was the moment. 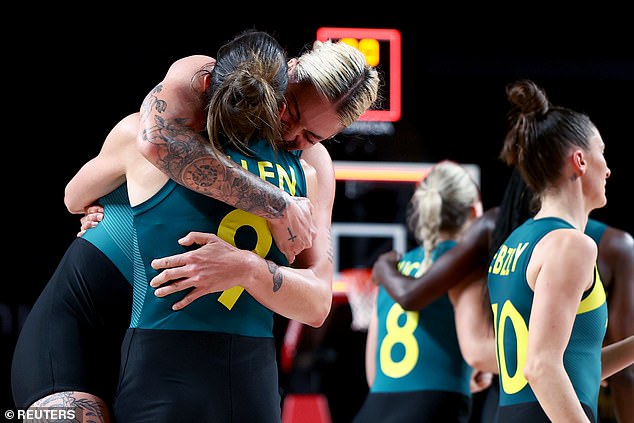 The United States have won the last six gold medals, three in finals against Australia (pictured)

‘I said ‘this comes down to this here’ (pointing to her heart) … you’ve got to play with some heart.

‘And it worked for us … they responded in the right way and we found a way to win.’

It saved the Opals – winners of three silver and two bronze medals – from their worst-ever Games result, a fifth in Rio five years ago.

But that will only be delayed unless Australia beats the United States for the first time in an Olympic campaign in Wednesday’s quarter-final.

But Australia beat them in their last meeting, in a Las Vegas exhibition game just hours after influential Opals centre Liz Cambage withdrew from the squad for mental health reasons.

‘We’ve been through a lot in the last month or so and we’ve stayed together, stayed prepared and ready,’ George said.

‘It was for the sisters that came before us; we hold a lot of pride in that and the way we finished the game, that’s the basketball we’re known for and that’s what we have to take into the finals.’

The winner of Serbia and China await in the semi-final, while Japan play Belgium and Spain meet France in the other quarter-finals.