Emma Wilson claims BRONZE in the RS:X windsurfing despite racing into second position as France’s Charline Picon nudges ahead of her with China claiming the gold

Emma Wilson has won a bronze medal in the women’s windsurfing at Enoshima.

Wilson started the double-point medal race in second place in the overall standings after winning four of the 12 preliminary events.

But she was overtaken by Charline Picon of France, who won the race to nudge into second position overall, with China’s Lu Yunxiu taking gold.

Emma Wilson has taken bronze in the RS:X windsurfing event after a thrilling final in Tokyo 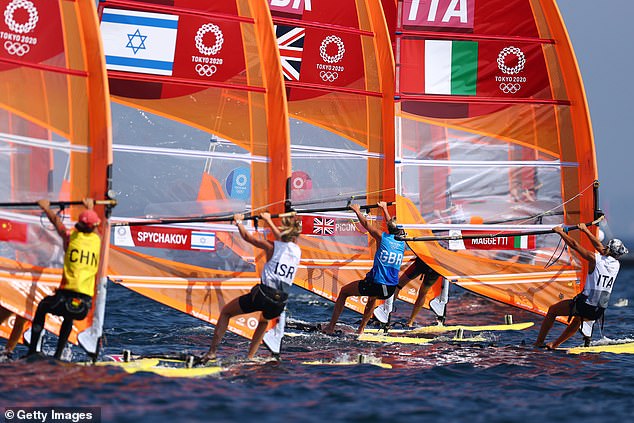 Wilson had gone into the final day of competition secure in the knowledge that she had already secured an Olympic medal.

Picon got off to a flying start for France and although the Briton made some progress, she could not catch her rival who streaked across the finish line.

Lu, knowing a single-place deficit behind Wilson would be enough to preserve the gold medal, tracked her rival over the line.

It was a historic moment for Wilson whose mother Penny Way represented Great Britain in the same category in two Olympics, finishing in sixth and seventh places respectively.