Touching glimpses into the lives of diners at a Japanese restaurant were captured by a US tourist who put his GoPro on the sushi conveyor belt.

The charming video was uploaded to YouTube by TkyoSam and is recorded inside of a sushi restaurant in Tokyo.

After going around all of the diners, the camera ends up with the confused cooks who pass it around before returning it to its owner.

At the start of the footage, the tourist can be seen smiling at the camera as he puts it on the conveyor belt.

As it starts to travel through the restaurant, we see a range of reactions from the customers.

Some don’t even notice as the camera slowly rolls past, their attention completely held by the conversations they are having with their friends or by the food in front of them.

The GoPro travels on the conveyor belt through the restaurant, with some people reacting in surprise when they notice it

And some seem far more interested in their tablets or mobile phone screens.

However, other diners seem delighted to notice the camera and they wave or smile happily at the camera as it passes.

Some seem surprised and confused with one man making a rude gesture at the GoPro.

However, several other diners appear oblivious to the GoPro with their attentions fixed on each other or on their phones

The footage has proven to be a hit on social media with almost 500,000 views on YouTube.

After the GoPro’s round of the restaurant, it ends up in the back with the kitchen staff who can be seen staring into the camera in confusion.

It’s moved to the side for a few minutes before a smiling staff member reunites it with its owner. 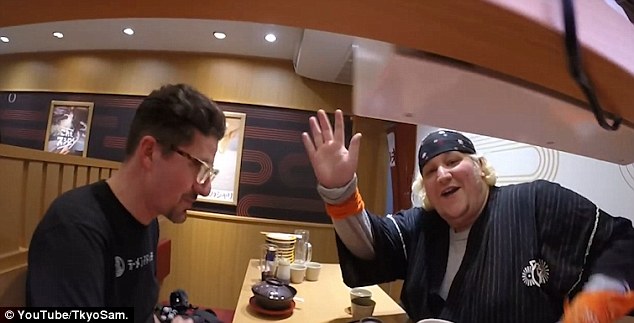 The GoPro belongs to a Youtuber named TkyoSam who uploaded the recording to his channel where it has almost 500,000 views