Facial recognition technology is being deployed in airports, security cameras and in our phones.

Now, Tokyo is using facial recognition in an unexpected way – to serve up targeted advertisements to taxi passengers as they’re ferried to their destination, based on their age and gender.

The unsettling practice was discovered by Google privacy engineer Rosa Golijan, who posted a photo of a tablet she encountered when hopping into a taxi in Japan.

Facial recognition technology is being deployed in airports, security cameras and in our phones. Now, Japan is using the tech to serve up targeted ads to passengers in taxis. File photo

A tablet on the back of a headrest declared that facial recognition scanners were recording passengers via a camera located in the front of the device.

‘The image data is used to estimate gender in order to deliver the most optimized content,’ a notice on the tablet stated.

‘The gender estimation runs once at the beginning of the advertisement program and the image data is discarded immediately after the estimation processing.’

Any data that’s recorded is deleted from both the tablet and the server, the notice claims.

However, that didn’t stop the many sufficiently creeped-out users from calling out the privacy risks associated with the device.

‘This seems completely trustworthy and not at all suspicious,’ one user wrote.

Another user added: ‘This is terrible. Advertisers guessing gender based on facial scans is completely unnecessary and invasive.’

Based on the photo, it appears that JapanTaxi was the taxi provider using the facial recognition tablet, but it’s unclear how many of their cars use the scanners. 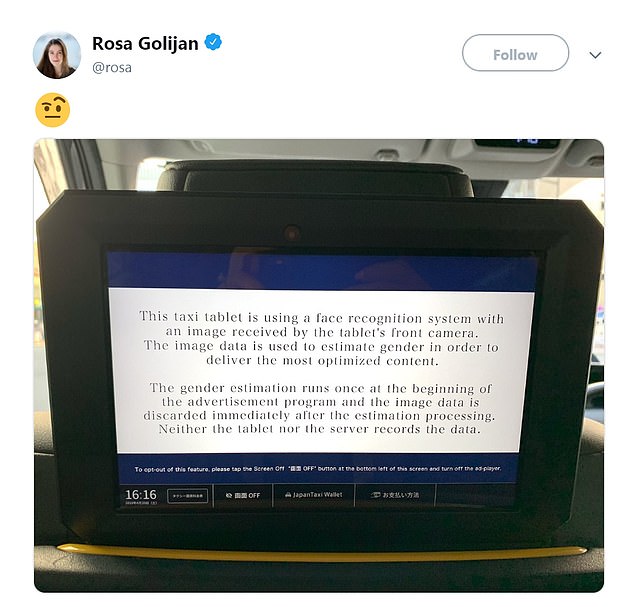 The unsettling practice was discovered by Google privacy engineer Rosa Golijan, who posted a photo of a tablet she encountered when hopping into a taxi in Japan

It’s also not clear what kinds of advertisements are being shown to users based on their age or gender.

However, another user posted a similar screenshot from a taxi cab, providing more detail on how the data is used.

‘Through Premium Taxi Vision, we use camera footage to estimate customer gender and other data and predict the optimal ad content for you, and improve the efficiency of ad content delivery in the vehicle,’ the notice states.

‘…The data will not include any information that would allow an individual to be identified.’

The notice also explains that any footage gathered by the cameras is deleted, as well as the data characterizing passengers.

A QR code on the notice then links to a Trust & Safety page for Japanese e-commerce platform company DeNA, where it says the ad targeting feature is meant to make ‘riding a taxi more comfortable and convenient,’ according to Futurism.

So far, this appears to be the only case of a taxi using facial recognition for targeted advertising purposes.

By comparison, in China, Uber has been using facial recognition to make sure that only drivers employed by the app are driving its vehicles, in an attempt to crack down on driver fraud.