Actor Tom Arnold says he has seen and heard the tapes that allegedly show Donald Trump saying the N-word on The Apprentice set.

During an interview on Megyn Kelly Today on Tuesday, the 59-year-old also claimed to have seen behind the scenes footage of Trump making his son Don Jr. cry.

When asked directly if he had seen and heard the N-word tape with his own eyes and ears, Arnold responded: ‘Oh yeah’.

While Arnold didn’t provide the context in which Trump supposedly made the racial comment, he said: ‘He’s on the set of the Apprentice. There’s a fake boardroom set at Trump Tower.’

Arnold, who said he met Trump 30 years ago, has a new TV series ‘The Hunt for the Trump Tapes’ that follows his quest to find the recordings and bring down his former friend.

He said the quest all started when Trump was running for president and he made a comment during an interview, saying: ‘I’ve seen this compilation tape… where he says the N-word and other stuff’.

When the interviewer said they’d like to see the tape, Arnold said he would ‘call my buddies and get it’ but they were too scared to hand it over.

The comedian made headlines last week after getting into a physical fight with Burnett at an Emmy’s party.

Burnett has claimed that Arnold has been stalking and harassing him for his show.

Arnold told Megyn Kelly that Burnett knows he has seen the tapes. 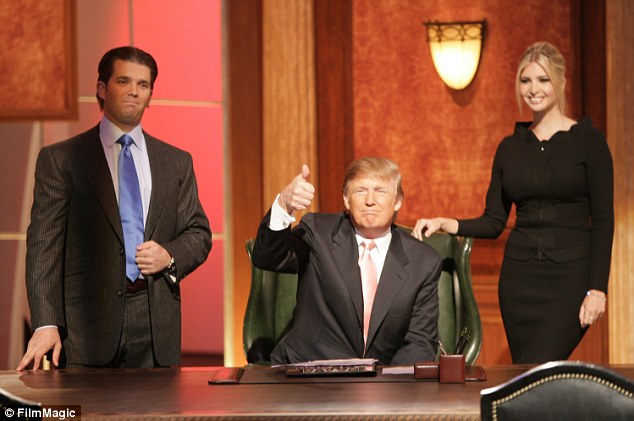 During an interview on Megyn Kelly Today on Tuesday, Arnold also claimed to have seen behind the scenes footage of Trump making his son Don Jr. cry (above with sister Ivanka) 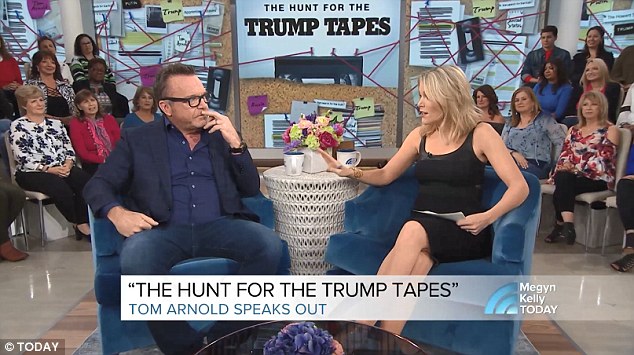 ‘He has sent me legal letters to try and fight this. Here’s a guy who pretends that nothing is going on. He’s Donald Trump’s best friend. He is covering for him, he’s complicit because he knows what’s on there,’ Arnold said.

Arnold also shot down claims he assaulted Burnett’s wife Roma Downey after she posted a photo of a bruise she claims Arnold gave her in  Emmy’s brawl.

She wrote alongside the photo: ‘Is your TV show worth it Tom? Please stop’.

‘I didn’t touch her, I didn’t even see her. Think about this, I went to the party allegedly uninvited, I beat up the CEO of MGM and his wife and then I didn’t get arrested and I got to stay at the party all night – what is going on? I file a police report and had to go to the hospital,’ Arnold said.

Arnold and Megyn Kelly got into a heated argument during their interview when the NBC host questioned him repeatedly about the assault claims. 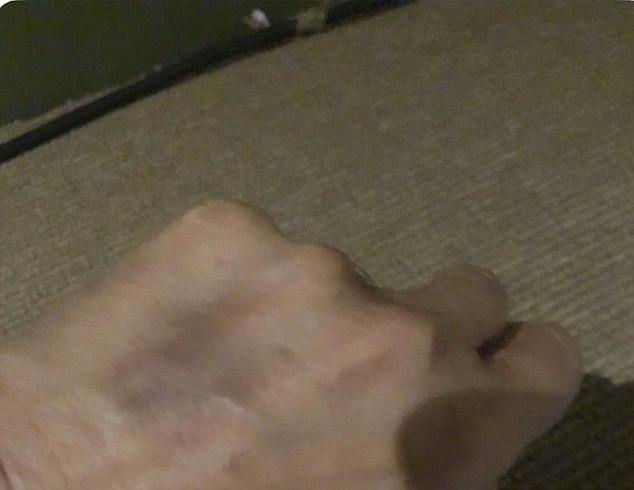 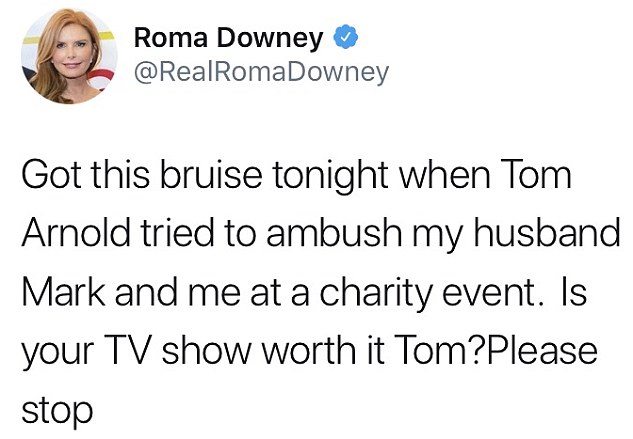 Roma Downey, who is the wife of Burnett, later posted a bruise she claims to have gotten in the melee and wrote: ‘Is your TV show worth it Tom? Please stop’ (photo and tweet above) 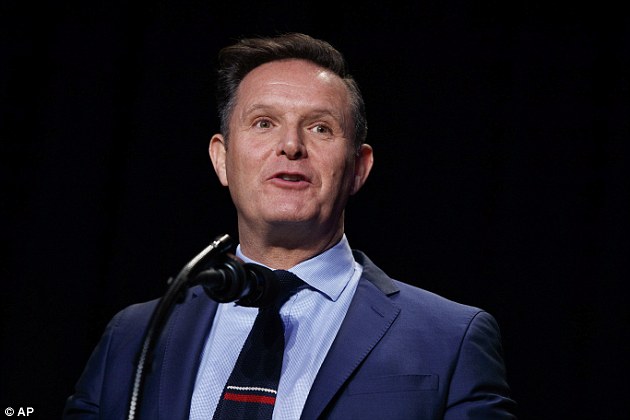 Burnett is the creator and producer of The Apprentice, and Arnold has a new show airing this week called The Hunt for The Trump Tapes (Burnett above in 2017)

‘Did you cause that bruise?’ Kelly asked Arnold.

Arnold made several jokes about Downey and the incident, to which Kelly responded: ‘Stop that, Tom. Don’t disparage her in personal terms’.

‘She said I assaulted her publicly,’ Arnold replied. ‘That’s disparaging me.’

‘Let’s be honest,’ Kelly said, ‘if you did assault her as she claims, it’s no laughing matter.’

And agitated Arnold hit back: “She said that I assaulted her is no damn laughing matter, Megyn!

‘If you defend (Brett) Kavanaugh and those guys, maybe you defend me for one second.’

Kelly responded: ‘No I won’t’, before clarifying she believes Kavanaugh deserves a fair trial.