Tom Brady boasts he’s too hydrated to get sunburned

The description of Tom Brady’s new book claims, ‘The TB12 Method is the only book an athlete will ever need, a playbook from Brady himself that will change the game’

Tom Brady believes that he doesn’t get sunburned because he drinks 2.5 gallons (9.4 liters) of water every day, and he suggests others do the same.

In his new book, ‘The TB12 Method,’ the New England Patriots franchise quarterback claimed that despite being fair skinned, he stopped getting sunburns once he got in the habit of hydrating himself with nearly 300 ounces of water a day.

‘When I was growing up, and playing outside in the sun, I got sunburned a lot,’ Brady wrote in the 300-page book. ‘I was a fair-skinned Irish boy, after all. These days, even if I get an adequate amount of sun, I won’t get a sunburn, which I credit to the amount of water I drink. I always hydrate afterward, too, to keep my skin from peeling.

‘When I once told that to my sister,’ the book continues, ‘she said, “You mean I don’t have to use all those moisturizers and facial products to keep my skin looking good? I should just drink as much water as you do? I think you should market your [stupid water drop things] as a beauty product.” I just laughed.’ 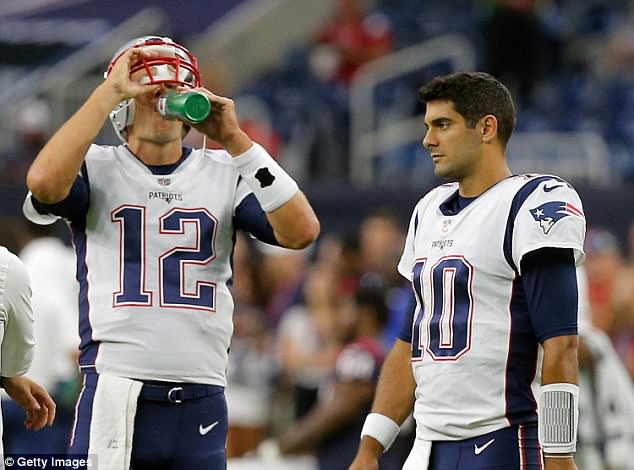 By drinking over two gallons of water a day, he claims, Brady (left) has made himself more or less immune to sunburns despite being ‘a fair-skinned Irish boy’

Those ‘stupid water drop things’ are Brady’s ‘TB12 electrolyte drops,’ which he encourages readers to use in their water. In fact, much of Brady’s book references his own line of health products.

According to a description of the book on Amazon, Brady ‘explains how he developed his groundbreaking approach to long-term fitness, presenting a comprehensive, step-by-step guide to his personal practice. Brady offers the principles behind pliability, which is at the heart of a new paradigm shift and movement toward a more natural, healthier way of exercising, training, and living—and one that challenges some commonly held assumptions around health and wellness.

The description continues, ‘The TB12 Method is the only book an athlete will ever need, a playbook from Brady himself that will change the game.’

In a recent interview with CBS, Brady confessed to some other interesting dietary quarks.

When asked about coffee, Brady said he has ‘[n]ever tried it.’ 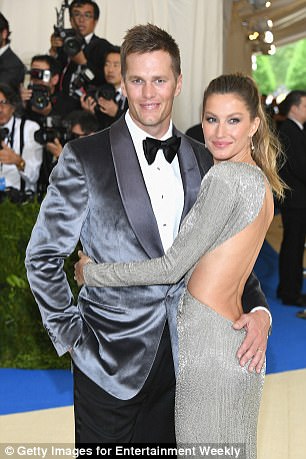 Brady and wife Gisele Bundchen, who claimed her husband played the 2016 season with a concussion. The NFL refuted this claim while Brady declined comment

He’s tried a ‘little bit’ of salt and ‘on occasion’ has some sugar. As for dairy, Brady ‘almost never’ tries it, aside from some intermittent encounters with ice cream.

Allen Campbell, Brady’s personal chef told Boston.com what the University of Michigan product refuses to eat in January of 2016.

‘[Tom] doesn’t eat nightshades, because they’re not anti-inflammatory,’ Campbell said. ‘So no tomatoes, peppers, mushrooms, or eggplants. Tomatoes trickle in every now and then, but just maybe once a month. I’m very cautious about tomatoes. They cause inflammation.’

While he remains concerned about dehydration and skincare, concussions are not a major concern, as he told CBS.

‘I don’t worry about them, no,’ Brady said in the interview. ‘I mean, I’m not oblivious to them. I understand the risks that come with the physical nature of our game.’

Brady’s wife, supermodel Gisele Bundchen, had said in a May interview that the quarterback has had unreported concussions and she worried about his long-term health. A joint NFL and players’ union investigation found there was no evidence that Brady or the team failed to follow the league’s policies or procedures on concussions. 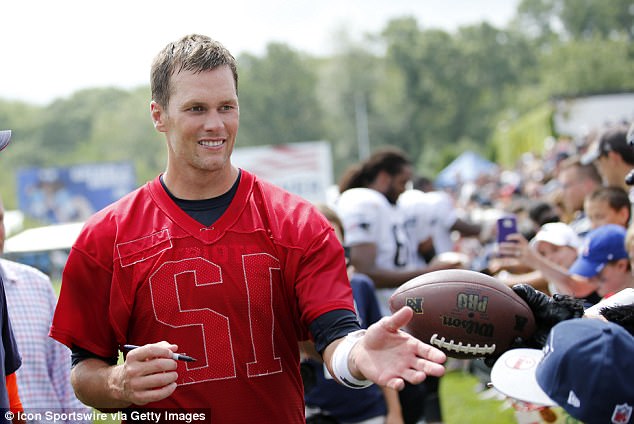 ‘This review identified no evidence of any deviation from the Protocol by the Patriots’ medical staff or the Unaffiliated Neurotrauma Consultants assigned to Patriots’ games or any indication that Mr. Brady sustained a concussion or reported signs or symptoms consistent with having sustained a concussion,’ the NFL’s statement read.

A recent Boston University study found chronic traumatic encephalopathy (CTE) in the brains of 110 of the 111 deceased NFL players examined. CTE has been linked to headaches, depression, suicidal thoughts, and dementia.

A five-time Super Bowl champion and two-time league MVP, Brady had one of his best seasons ever last year at the age of 39. After missing the first four games to serve his ‘Deflategate’ suspension, he threw for 3,554 yards and 28 touchdowns with only two interceptions, leading the Patriots to their fifth NFL title by rallying them from a 25-point deficit to the first overtime victory in Super Bowl history.