Tom Daley celebrated his 27th birthday in style on Friday.

The diver shared several glimpses into the big day to Instagram Stories, revealing that his adorable son Robbie, two, had helped him with his presents and husband Dustin Lance Black, 46, had made a very impressive cake while he was a training.

Ensuring to make the most of the occasion, Tom also shared a sweet clip of his little boy and beau singing happy birthday to him over a breakfast of pancakes.

Happy birthday! Tom Daley celebrated turning 27 in style on Friday as he was treated to lots of sweet treats and presents from his husband and son

Tom looked delighted in the short clip, panning the camera around to show his beaming face and blue birthday boy badge.

The father-of-one also got to have a single pink candle in his pancake stack and could not stop smiling as he thanked ‘Robbie and Daddy’ for singing to him.

He also revealed he’d been treated to a huge pile of presents, with Robbie playing the very cute birthday helper as he investigated the haul.

Later in the day, Tom was also treated to a very impressive cake made by Dustin while he was at training. 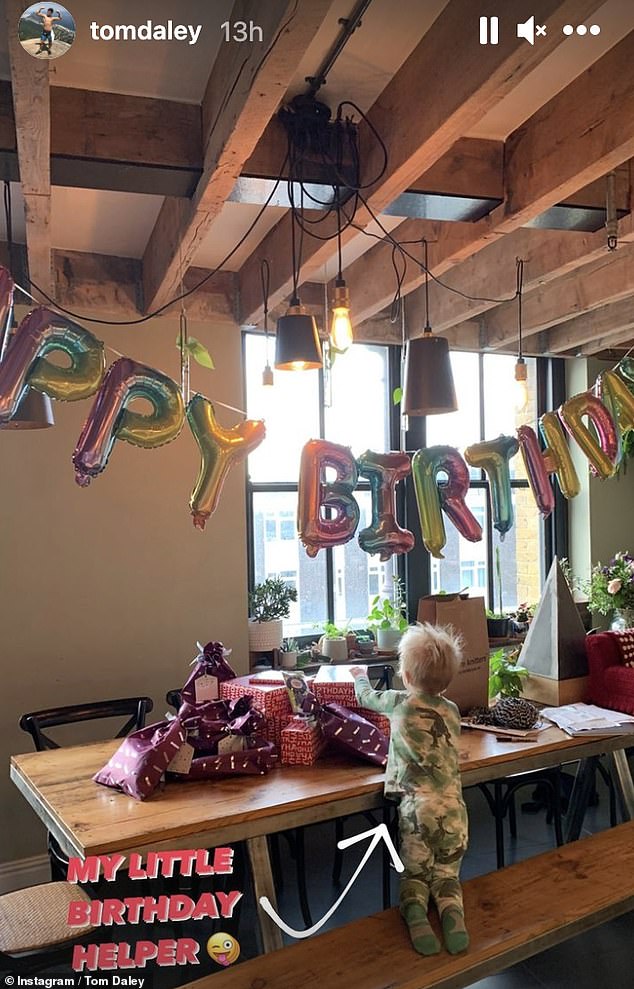 ‘My little birthday helper’: The diver’s son Robbie, two assisted with the big pile of presents

The bake looked sensational, with the film director ensuring to perfectly present it on a large stand.

Dustin also paid tribute to his beau, sharing a sweet snap of Tom playing with Robbie at the park as he penned: ‘Happy birthday to the man who makes our dreams come true. We love you Tom Daley.’

The couple – who tied the knot in May 2017 at Bovey Castle in Devon – welcomed Robert via an American surrogate in June 2018 and plan to have more children.

The birthday celebrations come after Tom admitted that he ‘might’ve come out as gay earlier’ had he not lived his life in the public eye. 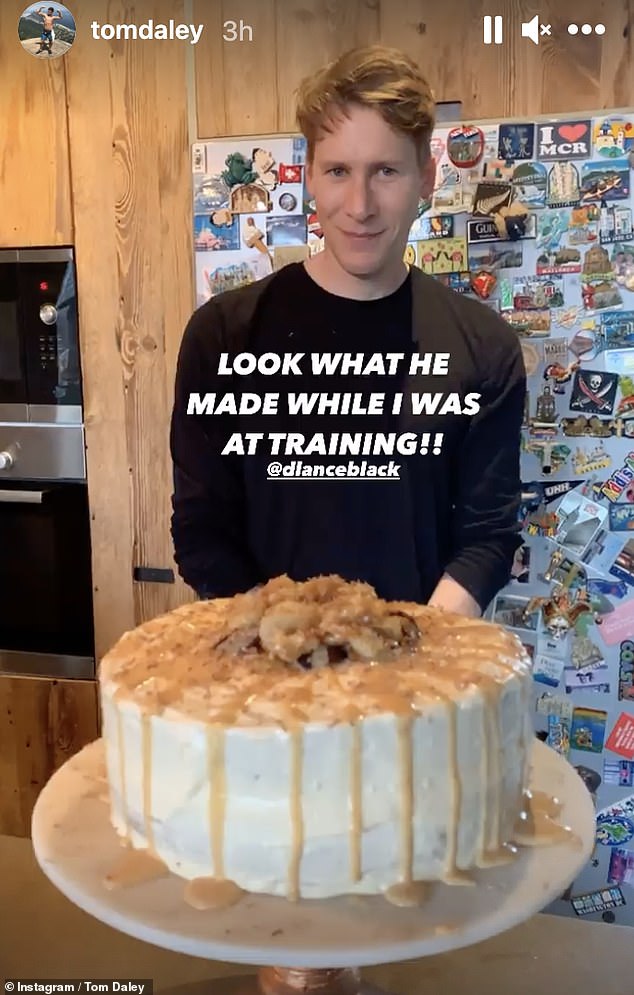 Wow! While Tom’s doting husband Dustin made a very impressive cake to surprise the diver after training 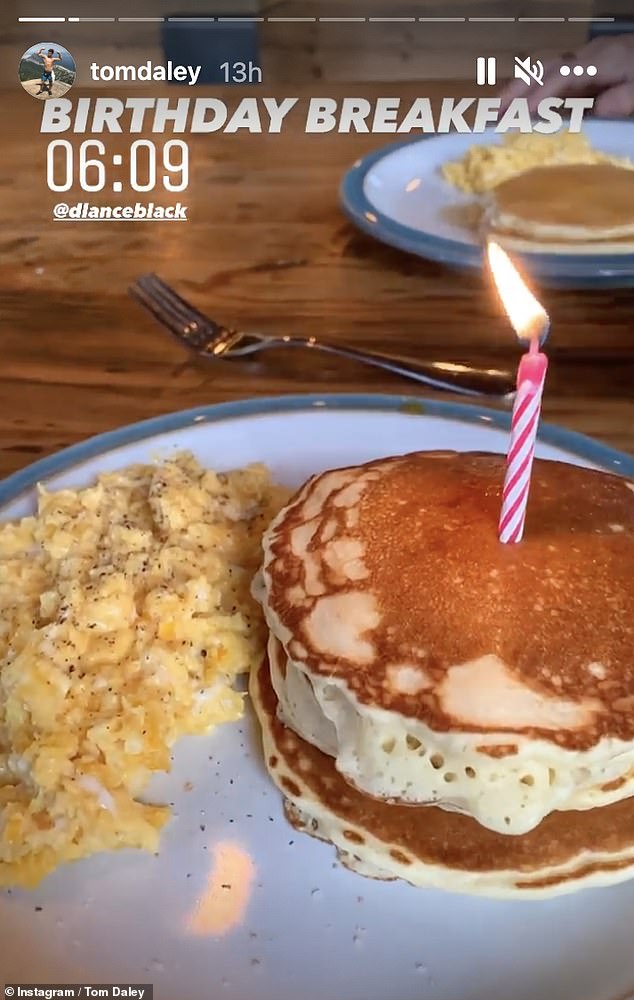 Delicious: He started off the day with pancakes and a sweet rendition of happy birthday from his family

In April 2014 the Olympic diver confirmed his sexuality in an emotional YouTube video to fans, released four months after he originally came out as bisexual.

And now, Tom has told Attitude Magazine his life in media spotlight prevented him coming out sooner.

The diver posed shirtless with fellow diver Matty Lee, 23, for a new cover shoot as he got candid about becoming famous at a young age, after winning his first World Championships Win, aged just 15, in 2009. 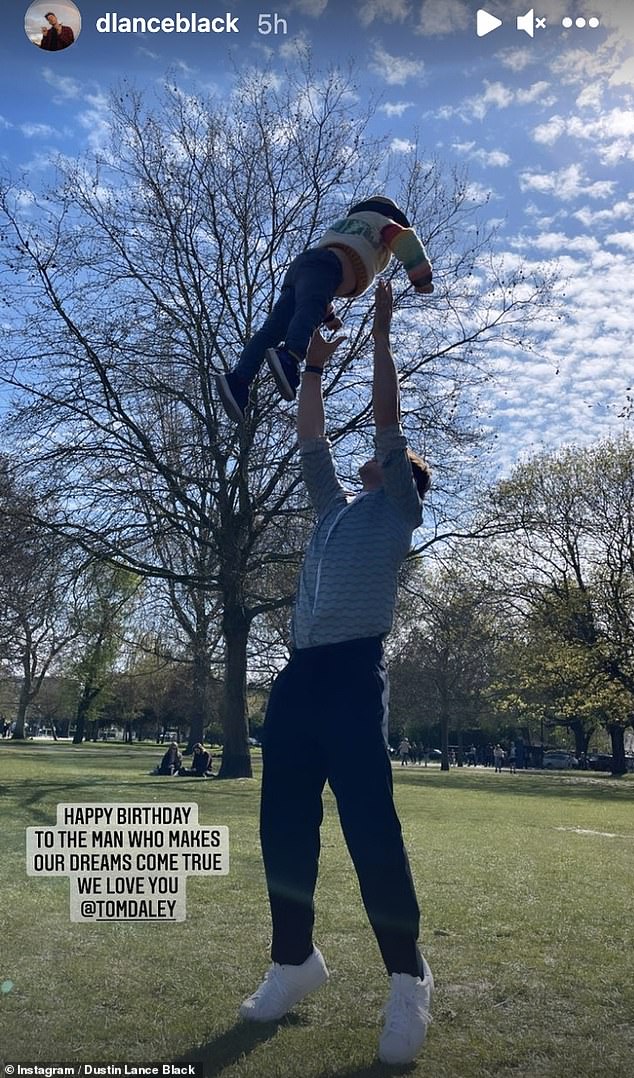 Lovely: Dustin also paid tribute to his beau, sharing a sweet snap of Tom playing with Robbie at the park as he penned: ‘Happy birthday to the man who makes our dreams come true’ 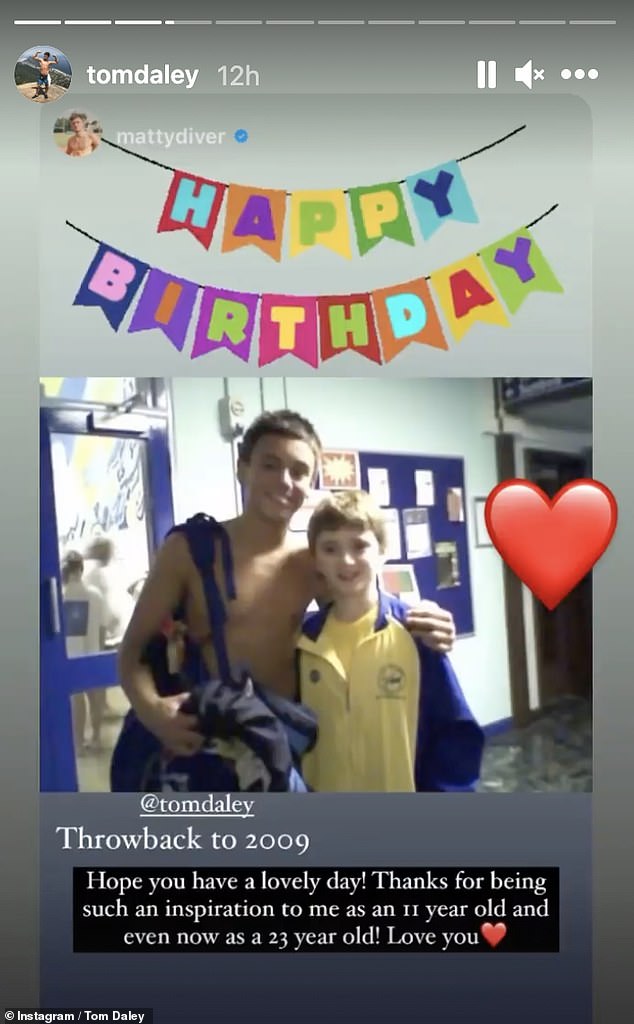 Asked if he regrets having so much of his life in the public eye, Tom insisted: ‘I don’t think I’d ever regret it. It is what it is. I share what I’d like to share, and that’s all of what’s on my social media and things like that.

‘At the end of the day, I’ve lived with it from such a young age, I don’t feel any different for it, if that makes sense? And I don’t know any different…

‘I don’t think I would have done anything differently, actually. I always think that I might’ve come out earlier, but then there was also a time for me to experiment and actually figure out who I am.

‘I didn’t want to have to go through all of that in the public eye, so I think doing it the way I did was the best way for me to do it.’ 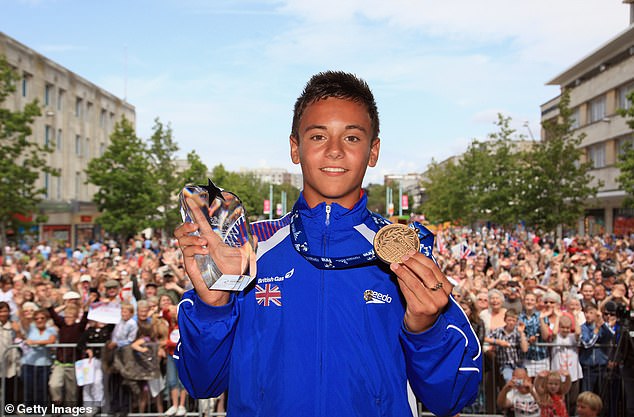 Growing up in the lime light: Tom become famous at a young age, after winning his first World Championships Win, aged 15, back in 2009 (pictured)