Fashion designer Tom Ford may be world famous for his iconic clothing and style, but the creative reveals he keeps things simple for himself and wears the same look everyday.

The 58-year-old designer says that between running his fashion empire, working on two upcoming films, and running after his husband Richard Buckley, 70, and their six-year-old son Jack, it’s easier for him to recycle his outfits – even if it means they haven’t seen a good wash in months.

‘I often feel like I’m dressed like I work in a shop, but I don’t have the energy, believe it or not, to put together a new look. And I know what works on me. Black, brown, gray. White for tennis,’ he revealed in an interview with Vogue.

‘By the way, these pants have probably not been dry-cleaned in months. I wear the same things day after day, I take them off at night and hang them up on a thing that nobody uses anymore, a valet de nuit.

‘I put my jacket on it, I flip my pants over it, I dump my pockets out, and then the next morning, I get up and Jack’s running around, and I’ve got to get him to school. And so I just put it all back on,’ he added.

Tom Ford, 58, reveals he prefers to wear the same outfit every day and hasn’t dry cleaned his pants in months out of simplicity and convenience 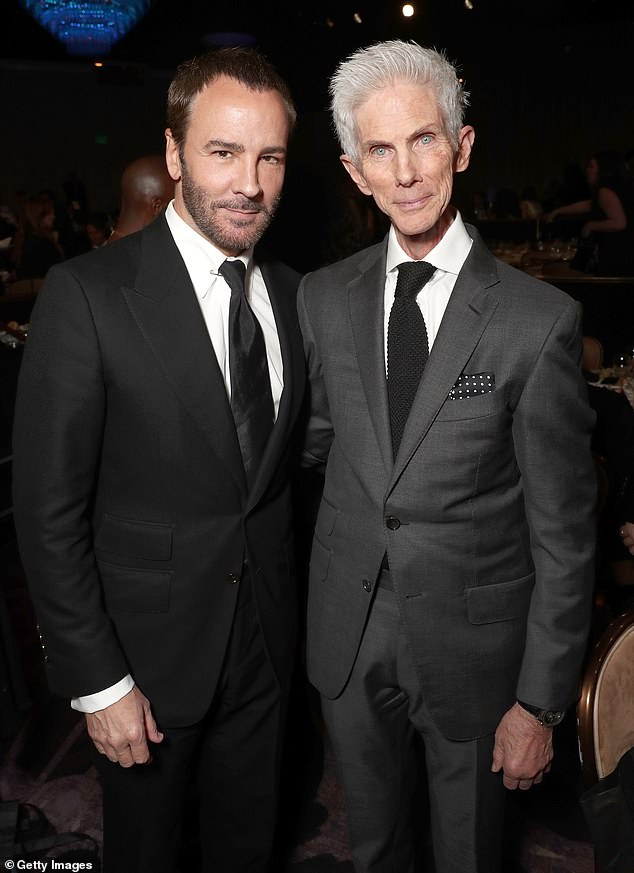 Ford pictured above with his husband 70-year-old Richard Buckley. They share a six-year-old son named Jack

But don’t be fooled, Ford may wear the same thing every day but his creative prowess has seen him send new svelte looks down the runway year after year.

And he’s ready to give a fashionable helping hand to people he meets along the way, including Democratic presidential candidate Pete Buttigieg, who he met at a small lunch early in his campaign.

‘At the table, on the stage, Buttigieg, for all his silken rhetoric, seemed to look smaller than he was due to the generous cut of his suit,’ the designer thought thinking the fashion faux-pas was something Ford could fix.

After the event, Ford said he texted Buttigieg’s husband Chasten and offered some sartorial advice. But Buttigieg didn’t take the designer’s suggestion.

‘Obviously he can’t wear my clothes. They’re too expensive, they’re wrong, they’re not made in America. And besides, whatever he’s doing is working. So does anyone need to f**k with it?’ Ford said.

Ford reportedly gave the South Bend, Indiana mayor a check for $5,600 this past spring, as per Business Insider. 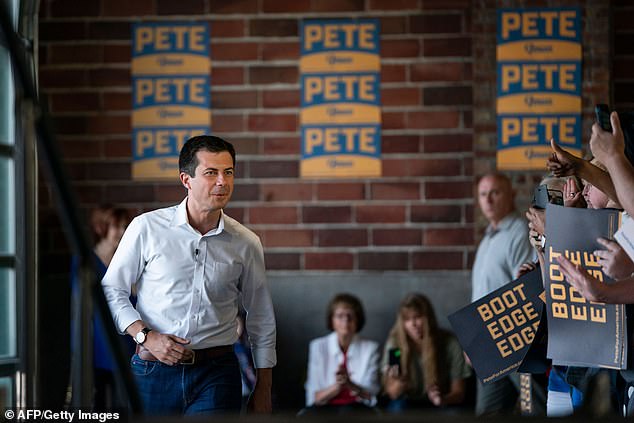 Ford revealed he shared fashion advice with presidential candidate Pete Buttigieg to wear slimmer, more flattering suits, but the mayor declined. ‘Obviously he can’t wear my clothes. They’re too expensive..And besides, whatever he’s doing is working. So does anyone need to f**k with it?’ he said

Ford launched his brand just 13 years ago and has grown it into an empire on par with esteemed French houses, reaping in an annual $2billion in retail sales.

There was a time when Ford thought his creativity and success was dependent on alcohol an drugs. But the Austin, Texas native has come a long way since then and celebrated 10 years of sobriety in May.

‘Drinking and drugs fueled many of my most creative moments, and I had an incredible fear that once I was sober I would not be able to create,’ he revealed to the magazine.

‘It takes some time to get yourself back. We shift our addictions, and now my addiction is work, but it brings me enormous pleasure. 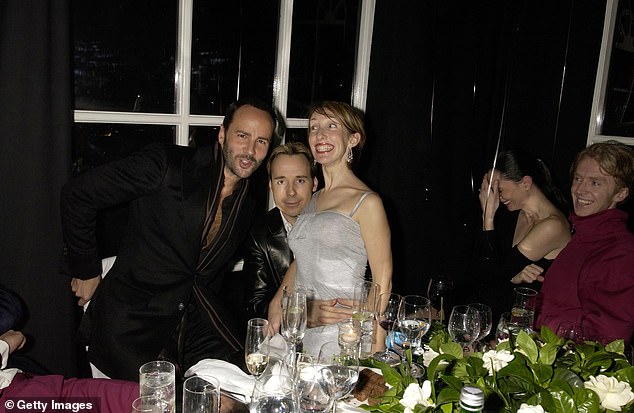 Ford pictured above during his partying days at a Valentino party in 2002 (it’s not clear if he was drinking in the above image). He said that he once believed alcohol and drugs were his crutch for his creative energy 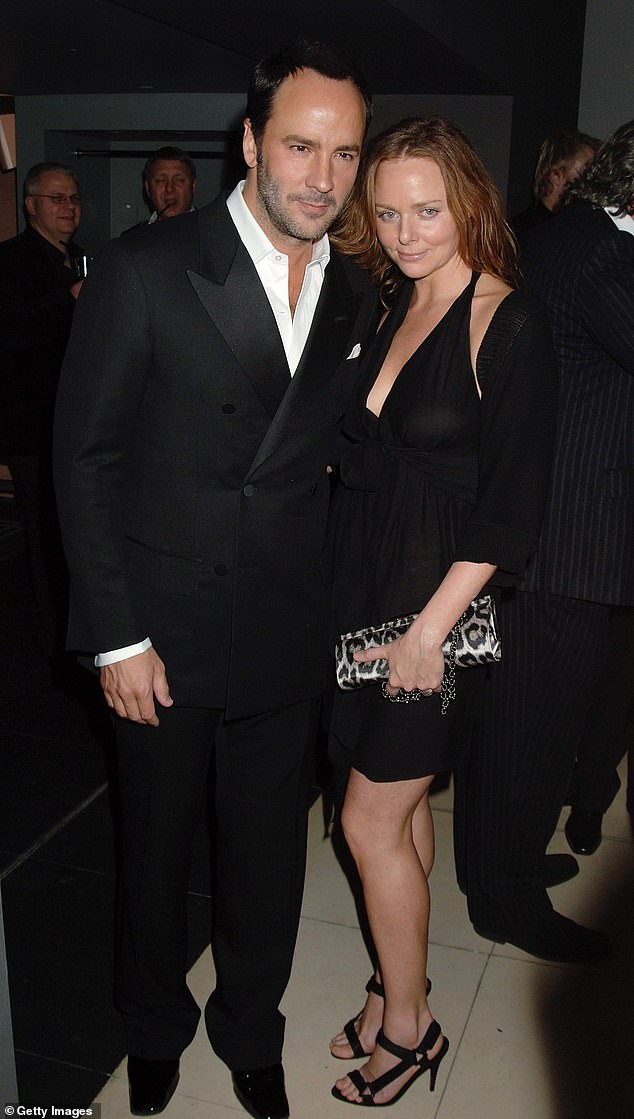 Ford above with his good friend Stella McCartney, who is the godmother to his son Jack

‘And it keeps my mind from the fact that we are this tiny speck of a planet in the middle of an infinite number of other planets, and everything we have, what does any of it mean? Why do we struggle, why do we suffer? If I start down that road, it’s like, guess what? I think I’ll do something really important and choose the new lipstick colors for 2021,’ he added.

As for his success, Ford, who was just named the chairman of the Council of Fashion Designers of America, says he has a hard time accepting praise.

‘I have a very hard time taking compliments, or complimenting myself  but I sometimes have to stop and think, Wow: How am I wearing Tom Ford underwear right now, a Tom Ford watch, Tom Ford cuff links, a Tom Ford shirt, a Tom Ford suit, Tom Ford shoes, Tom Ford glasses, Tom Ford moisturizer, Tom Ford bronzer? How is there a Jay-Z song called ‘Tom Ford’? In 12 years, how did that happen,’ he gushed.

He boasts high-profile friends like Oscar-winning actor Tom Hanks, who he hails as one of his closest friends in Los Angeles, and fashion designer Stella McCartney, who is the godmother of his son Jack.

‘Of course I still ask him fashion questions like a pilgrim who has climbed a mountain in search of wisdom, and he has imparted the most simple of answers,’ Tom Hanks revealed. ‘Button the jacket, as it slims your form. Use the pockets, as a jacket is like a man’s purse — just don’t get bulky. Cap-toed shoes go with everything.’

‘[Tom] is first and foremost a gentleman. When he and Richard asked me to be godparent to Jack, they both got down on bended knee,’ McCartney said.