‘[What’s in a name?’ asks young Juliet of her prancing paramour Romeo. ‘That which we call a rose by any other name would smell as sweet.’ Flavour Bastard, on the other hand, would not. Because this new Soho restaurant isn’t simply lumbered with a name that makes Sexy Fish seem like the very apotheosis of linguistic good taste.

But it also tries too hard. Way, way too hard. Like that middle-aged prat you see whizzing down the pavement on his micro-scooter, clad in boxfresh Yeezy Boosts, who thinks he’s edgy, with it and down with the kids, Flavour Bastard just gets it wrong. 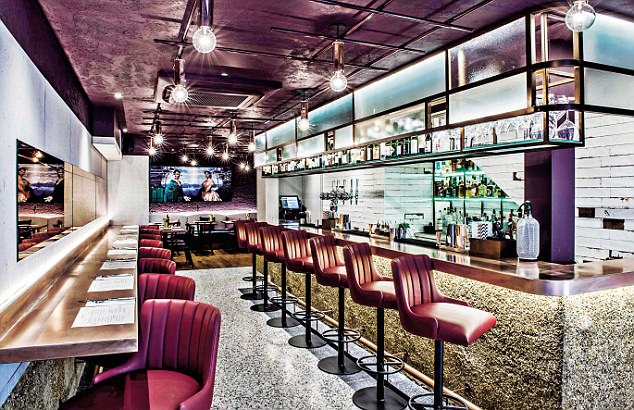 When we arrive, the place is empty, but two hours later and there’s not a free seat to be seen 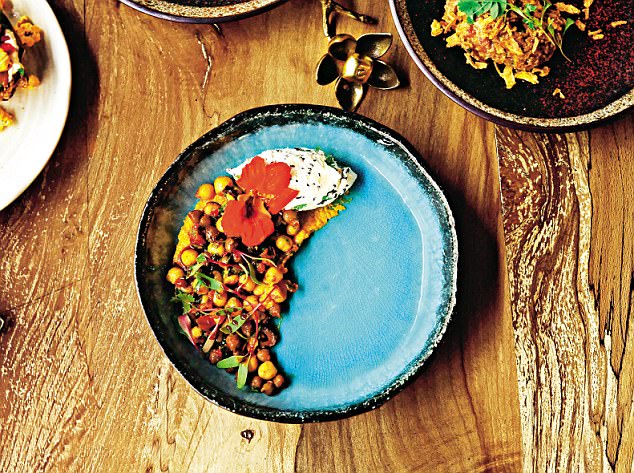 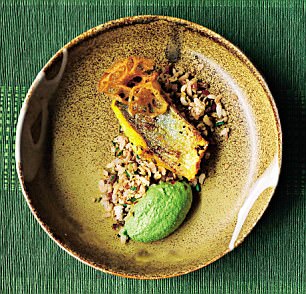 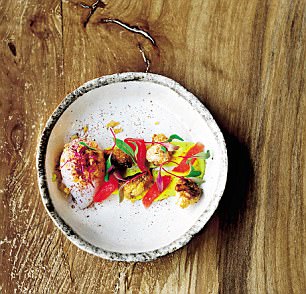 It has the feel of something cooked up in the boardroom, a confected contrivance of cash flow, trend analysis and marketing plan. With its loud, irritating music and the sort of wildly expensive interior design that combines the sparse (cool concrete walls, bare overhead bulbs) with the overwrought, (purple patches of stone, pictures of monkeys riding floral patterned bombs), the restaurant sets one’s teeth on edge before the food even appears.

The menu – divided, of course, into sharing plates both ‘small’ and ‘tiny’ – has seemingly homely, hand-scrawled annotations; a cloud of curds ‘from the house of Holkar’; Fat of the Land butter made from ‘pork, beef and lamb fat!’

It’s meant to seem spontaneous and inscribed that morning. They turn out to be permanently printed. Then there’s the language, all cloyingly matey and desperately overwritten.

The wine list is preceded by a long and overwrought essay about ‘Our liquids and why you should love them.’ Urgh. Just as the wines are separated into ‘Smashable Bastards’ and ‘Big Bastards.’ The beer, ‘The Bastard’s Brew’, is ‘made by our own calloused  hands’ and is apparently also ‘seriously smashable’. Nice. As for the bill… ‘Authenticity, Ceremony, Rules’ are crossed out in that same artificial scrawl and replaced with ‘Flavours, Ideas, Fun.’ Yup. Really sticking it to the man.

It’s all so damned tiring. The menu skips skittishly and breathlessly across the globe, desperate  to cover every last fad – Spain, Korea, India, France, the Caribbean, Middle East and Japan, all thrown together in some Bastard-ing mish-mash. Eggs are cooked slowly in water baths, cauliflower is inevitably charred. But there’s nothing particularly original about anything. Certainly nothing I haven’t seen done before.

That’s not to say that executive chef Pratap Chahal is without talent. Having worked at Chez Bruce, Gordon Ramsay at Claridge’s and The Cinnamon Club, he sure knows his calcots. And some of the dishes, against all expectation, are great.

A sprightly, spicy mackerel and anchovy pâté, with a low growl of mustard, arrives in a sealed sardine-type tin, topped with a fat curl of crackling. Steamed rice cake with home-made kimchee has the satisfying honk of Seoul backstreets, and doesn’t hold back on the chilli. Korean to its core.

We like the tandoori fried chicken, the batter light, and suffused with real Indian allure. A vinegar dip works softly acidic wonders. Caribbean mussels, sweet and plump, come in a lime-spiked sauce, heavy on the fruity Scotch Bonnet heat. Even poke, that Hawaiian-born ginger stepson of sushi and salad, has crunch and punch and sings with verdant health.

Not everything works. A sloppy, over-sweet miso aubergine (a take on Japanese Nasu Dengaku) has no need for the peanut crumble. Too much going on, for no real culinary reason. Chickpea salad comes groaning with rose harissa, smoked hummus, sesame labneh and date syrup but somehow still remains dull.

A chocolate brownie mousse is fine, but ruined by over-assertive lavender ice cream, with the musty pong of a spinster’s knicker drawer. There’s popping candy in it too, a trend that was funny the first time. A decade on, and it’s just a bore.

When we arrive, the place is empty, but two hours later and there’s not a free seat to be seen. Its predecessor, Arbutus, was a serious restaurant with serious food. Anthony Demetre sure could cook, and certainly didn’t have to resort to gimmick to flog his grub.

And Soho is a place where purity and simplicity is respected, even revered. The eternal popularity of Hoppers, Koya, Quo Vadis and Barshu is proof of that.

Perhaps the people behind Flavour Bastard truly believe they are breaking glass ceilings and cooking outside of the box. Blue-sky eating or some such corporate bilge.

But despite some decent dishes, it’s just impossible to like, let alone love. It’s so desperate for your attention, so keen to preen and show off, that it forgets what really matters – don’t tell, just do. And do well.

Service is sweet enough and the wine list, once you get past the florid prose, has some real stars hidden within.

My friend Anna, who comes with me to lunch, lives in sunny Acapulco and only returns to London every few years. What did you think, I ask? She wrinkles her nose politely, looks around and shrugs her shoulders. ‘Why?’ she asks with an apologetic smile. Why indeed. She’ll return to Mexico, with this place her only taste of the capital’s new crop. The bastards.

Galatoire’s, that fine New Orleans institution, came to cook at The Colony Room for a week. The Big Easy comes to the Big Smoke. So a fine lunch of seafood gumbo, crabmeat sardou and bread pudding with bananas Foster sauce.

Salted beef, salted mackerel gut curry and a fierce chicken kea at Thai 101 Kitchen for lunch. Then down to Dorset for a rather less fiery, but equally excellent, roast chicken and roast potatoes.

Shepherd’s pie and lots of claret for lunch before back up to London (I wasn’t driving), for dinner of native oysters, potted shrimp and Dover sole at J Sheekey, a place I’ve fallen back in love with.

A fairly filthy lunch of strange nachos, rubbish tacos and awful potato skins somewhere in Enfield. Then down to my father’s, with a few packets of Scampi Fries for solace.