It’s been 20 years since I last set foot in the Institute of Contemporary Arts. When I went to see Pasolini’s infamous Salò it had been banned in the UK for a quarter of a century. And as I staggered out, after what seemed like an age later, I could see why. Let’s just say that it’s one of those films – undoubtedly powerful, but near unwatchable – that most definitely turns you off your tucker.

But as I stroll through those whitewashed halls once more, I cast any lingering memories of fascist excess aside. And turn my thoughts to lunch. At Rochelle ICA, the second incarnation of east London’s Rochelle Canteen, where Melanie Arnold and Margot Henderson (along with their team) cook the sort of deeply seasonal, splendidly unfussy food that you always want to eat. And their new venue is more of the same. The room may be stripped back and minimalist – the only colour comes from a row of mini cactuses, two fire extinguishers, a few bottles of pickles. And a small blackboard. But the room is suffused with the sort of natural warmth that is born, not bought. 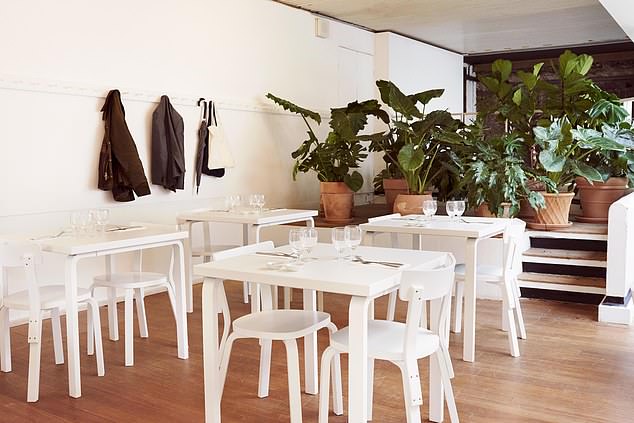 The room at Rochelle ICA may be stripped back and minimalist – the only colour comes from a row of mini cactuses, two fire extinguishers, a few bottles of pickles. And a small blackboard. But the room is suffused with the sort of natural warmth that is born, not bought

We gaze out onto the Mall, and dunk fat radishes into sweetly creamy smoked cod’s roe. No unnecessary embellishments, or faffing about, just that perfect combination of crisp fire and soft saltiness. We wipe the plate with fistfuls of those peppery leaves. An artichoke next, served whole, one of those foods, like sea urchin and crab, that makes you work hard for your reward. The outer leaves are dipped into a sharp vinaigrette, the hidden heart swiftly devoured.

Then gloriously fresh sardines, delicately marinated, so they possess a pinch, rather than slap, of vinegary vim. They’re mixed with room temperature tomatoes at the very peak of their summer lusciousness. It’s a dish of pure, unfiltered culinary common sense. ‘Why the hell haven’t I eaten this before?’ sighs my mate Damo, before mopping up the juices with a chunk of proper bread. Better still is a limpid crab broth, almost ethereal in its delicacy, the crustacean having given up not just its heart to the soup. But its soul too. There are slivers of spring onion, and scraps of seaweed, and a nudge of chilli, and plump dumplings lurking at the bottom, stuffed full with meat brown and white, encased in a pastry that would make a dim sum master proud. Hong Kong, by way of Holkham. This crab sure didn’t die in vain.

And just when you think this will be a lunch so light and elegant that it may well float away, along comes a pig’s head terrine that is magnificently robust, and wonderfully fatty, lustily seasoned, and marbled with fat chunks of cheek. By now, the second bottle of crisp, clean, cold Sancerre has come and gone, and a third is being uncorked. Hake is a sinuous, sharp-fanged beast that looks as fearsome in life as it tastes fine in death. It comes roasted with braised fennel, buttery new potatoes and a great splodge of pungent aioli. There’s a hunk of Dexter sirloin, cooked bloody, with a pile of fresh horseradish sauce, and dripping chips, beefy in both senses of the word.

Best of all is my guinea fowl and trotter pie, with a shortcrust lid that spills down the side of the dish. Inside, chunks of meat and nuggets of wobble, all in the sort of rich, heaven-scented sauce you want to slurp from a cup. It’s a pie of quiet majesty.

Rochelle ICA, like Rochelle Canteen, serves up the sort of food that you want to eat every day. It’s food to make you happy, the perfect accompaniment to a long Friday lunch with friends. Head chef Ben Coombs runs a serious kitchen, without ever feeling the need to swank or show off. Confident, assured, grown-up cooking for people who have tired of the fiddles and flurries of fickle gastronomic fancies. A handsome menu, bursting with ingredients at their seasonal best, skilfully done. Sensibly priced and charmingly served too. Cooking for pleasure, not show. This is a lunch to love.

To Fort Worth, Texas, a fine city. Smoked brisket and sausage at Angelo’s Bar-B-Que. Always my first port of call.

Breakfast of tripe tacos, plus asada too, at Salsa Limón. I sneak back later for Asada El Capitán, on flour tortillas, with cheese. Then I give a talk at the wonderful Central Market about British food, as we eat Scotch eggs, Scottish langoustines and beef Wellington. British food being celebrated in Texas. How things have changed.

Another tripe taco for breakfast. Then a #1 Whataburger on way to airport. A Texas fast food institution. Saturday Back home, and time for vegetables. But first, xio long ba at Beijing Dumpling, Chinatown.