The Pimlico restaurant A Wong may not be the best Chinese in Britain. Such matters are entirely subjective, with no place for pompously empirical superlatives. But it’s certainly one of my favourites. Because Andrew Wong is a dazzlingly talented chef who manages to revere the traditions of this glorious cuisine, while not being constrained by them. His food is at once classic and effortlessly modern, too.

So news that he’s opened a new place, Kym’s (the name of his parents’ original restaurant) in the increasingly impressive Bloomberg Arcade, fills me with giddily greedy delight. Albeit tempered with a soupçon of regret. Will he be spreading his talents too thin? Still, Kym’s is all about the ‘the ancient craft of Chinese roasting,’ mingled with ‘the creativity and craftmanship of London’s Chinatown’. All very exciting, although to be honest, Wong could open a cup noodle shack and I’d be there. 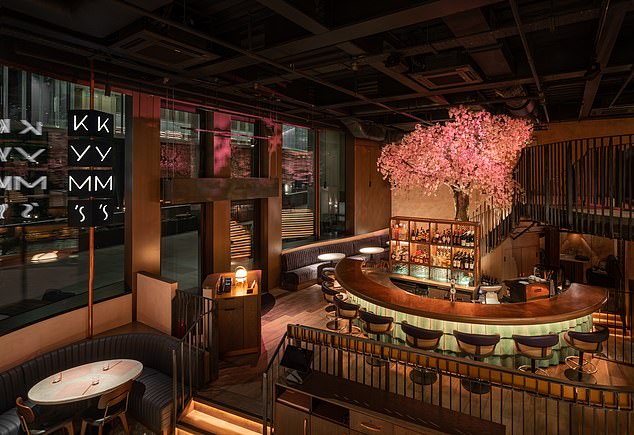 Kym’s in the increasingly impressive Bloomberg Arcade, has the intense, frantic buzz of an old-school Hong Kong dim sum parlour

The room is discreetly, expensively handsome, all dark woods, copper-topped bars, crushed velvet banquettes, marble-topped tables and subtle, elegant lighting. Like the Hong Kong penthouse of an achingly metrosexual James Bond baddie. There’s even a cherry tree, albeit artificial, in eternally merry bloom. And the intense, frantic buzz of an old-school Hong Kong dim sum parlour. The open kitchen is bedecked with great sides of roasted meats, like an empress wears her jade. They might be the superstars, but there’s plenty more to love.

We start with some of the most silkenly seductive tofu I’ve eaten. The heat is subtle, tempered by the verdant bite of spring onion, deep-fried onion crunch and a quietly sulphurous hint of 100-year-old egg. Astonishingly delicate, yet slyly robust, it’s Ma Po clad in Dior. Sichuan aubergine, in contrast, is assuredly traditional – dark, messy, salty and sticky, rich with fermented bean paste and a tingle of Sichuan pepper.

More sticky, rich succour with northern-style Xian lamb, which arrives in a tiny bronze pan, and is stuffed, alongside peanut sauce and a pomegranate-seed-spiked onion salad, into the most fluffy of bao buns. A two-bite triumph. Just like the fatty, lovingly charred pork skewers, a superior street food snack. And green beans, wearing a diaphanous batter, scattered with fresh chilli, spring onion and lashings of black pepper, that coat the lips with a fragrantly oily film.

Crispy duck arrives as a deepfried brick. You crack it open to reveal the succulent strands within. Slices of pickled plum add tart relief. Here, balance is everything, and for every mouthful of meaty magnificence there’s light relief too. Mouth-puckeringly sharp pickled daikon, crisp and pert. And a bracing lemongrass salad (below), light and lithe, with lashings of lime juice, and fistfuls of peanuts, a joyous jolt to the taste buds.

Not everything thrills. A deepfried prawn is fine but forgettable, the pineapple-spiked sauce cloyingly sweet. And pork and shrimp bao are uncharacteristically underseasoned. But Wong doesn’t do bad, merely not as good as the rest. A Taiwanese chicken chop, expertly breaded and fried, with a Worcestershire sauce dip, is a study in comforting restraint. While the roasted meats… 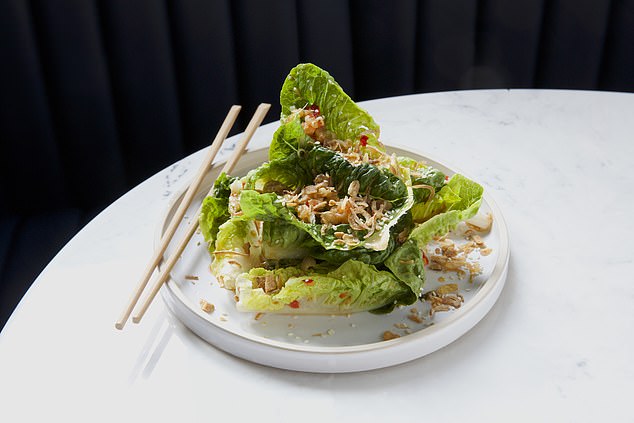 A bracing lemongrass salad, light and lithe, with lashings of lime juice, and fistfuls of peanuts, a joyous jolt to the taste buds

Well, what do you think? Wong approaches these cuts with the precision of a nuclear scientist, the zeal of a carnivorous evangelist. The soy chicken, sighingly succulent and profoundly flavoured, wears a glazed skin that manages to be both chewy and crisp. Char siu collapses in sweet hysteria upon the tongue, while the pork belly, with its just-crisp-but-not-too-brittle crust, is the sort of thing that gets heavenly choirs trilling of Gloria, in excelsis Deo! We don’t so much eat these meats as inhale them. Seriously superior flesh.

Now after the usual Cantonese meat feast, you crawl out of the restaurant like a python that has eaten a cow. But instead we fairly skip. Tribute to the deftness of Wong’s hand, perhaps. Or the sheer joy of a master at the top of his game.