‘Tom Steyer’s got two billion bucks but only one tie’: Democrat’s outfit makes waves on Twitter after the man himself failed to grab attention during last night’s debate

Tom Steyer made waves on Twitter during the Democratic debate on Tuesday night – but perhaps not for the reason he would have hoped.

The billionaire’s tie drew all the attention after the man himself largely failed to make an impression in Des Moines ahead of the Iowa caucus on February 2.

Steyer has made a point of wearing the same time throughout the campaign, but it caused a particular stir on Tuesday night as the narrowest Democrat field yet – six candidates – duked it out in a bid to become the presidential nominee.

At one point, Google Trends gleefully pointed out that the top trending topic about the businessman was ‘Tom Steyer tie’.

Meanwhile others took to roasting him for it, with Blaze TV host Jon Miller joking: ‘Tom Steyer’s got 2 billion bucks but only 1 tie.’

Michael Harriot pointed out: ‘Here is the most important question the moderators are ignoring: Why does Tom Steyer have only one tie?’

It seems that Steyer’s media team picked up on the trend, before advertising a copy of the tie in his online store.

According to a spokesman for Steyer, ‘he wears Scottish ties every day because, in his own words, you got to dress for the fight.’ 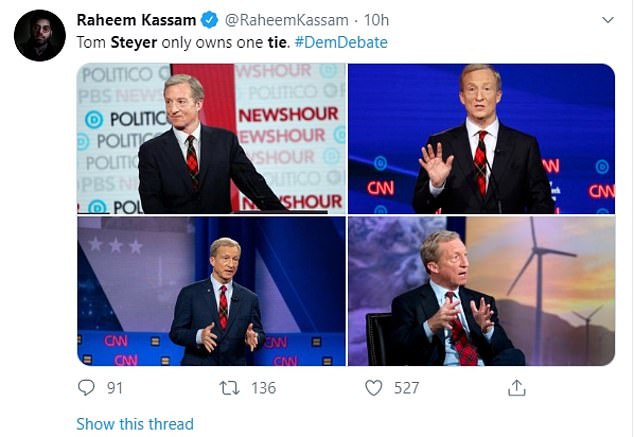 Viewers were fascinated by the fact that Steyer has worn what appears to be the same time throughout the campaign, despite being fantastically wealthy

While the tie was a hit Steyer himself failed to have the same impact, speaking for just 12 minutes compared to the other five candidates, who all got in 16 minutes or more of airtime.

He plugged his top issue of climate change, and touted himself as the strongest challenger to Trump on the economy, but had little to say on other issues.

Perhaps his biggest moment came when he ended up the middle-man in an apparent bust-up between Elizabeth Warren and Bernie Sanders.

After the debate was over, Warren went to speak with Sanders who extended a hand towards her which she didn’t take.

The two then seemed to get involved in a very animated conversation, which was not caught on a mic.

Standing in the background throughout – while attempting to speak with Sanders himself – was Steyer. 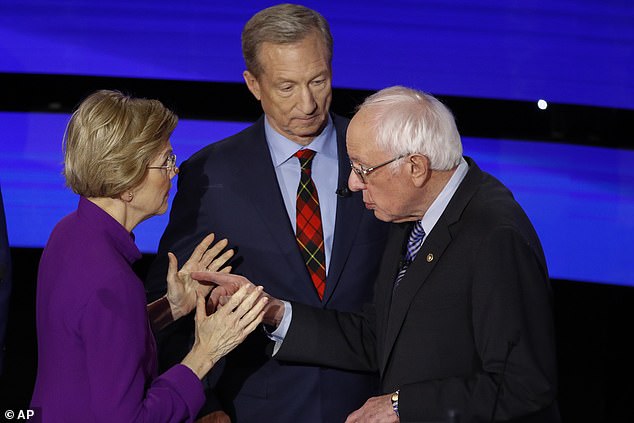 Steyer’s other stand-out moment came when he got caught in an apparent bust-up between Warren and Sanders, though later claimed not to have heard what was said

But asked afterwards what the pair had been saying, he claimed not to have heard.

‘I was just going up to say good night. And I felt like okay, there’s something going on. Good night! I’m out of here! I really wasn’t listening,’ he said.

‘They were talking about getting together or something. I really didn’t listen.

‘It was one of those awkward moments where I felt like, you know, I need to move on as fast as possible. You could see it was an awkward moment. My goal was simply to say good night to two people I respect.

‘The last thing I wanted to do was get in between the two of them and try and listen in. That was not my goal and I didn’t do it.’

Warren and Sanders, while political allies, have been left at personal odds after reports that he told her a woman couldn’t win against Trump during a chat in 2018.

She added fuel to the fire with a statement afterwards appearing to confirm that interpretation of conversation, despite Sanders denying anything to the effect had been said. 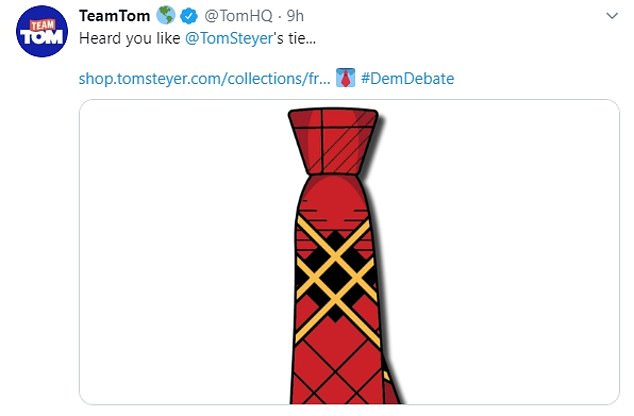 The tie set off a Google trend alert which didn’t go unnoticed by Steyer’s social media team, who promptly offered copies for sale