Stoppard’s back, at his most personal… and what a glittering triumph!

Welcome to a festive Vienna in December 1899, as the members of two intermarried Jewish families assemble to celebrate the season.

As the curtain opens, the Merz and the Jakobovicz clans appear to be posing for a photograph; a daguerreotype of doom, as it turns out.

Bathed in a beautiful light, their expressions serene, they are deaf to the swirl of ominous music that thunders forth behind them.

For they cannot know, as the dread-filled audience know, of the fate that awaits them over the coming decades. And if they did, they simply wouldn’t believe it. Who could?

Welcome to a festive Vienna in December 1899, as the members of two intermarried Jewish families assemble to celebrate the season

Certainly not cloth manufacturer Hermann Merz (Adrian Scarborough.) For Hermann has prospered, and how.

He has his factories and his mills and his Catholic wife Gretl (Faye Castelow), who is glamorous, adored and adorable. Their son Jacob was baptised and circumcised in the same week.

‘He yelled both times,’ laughs his mother in one of the play’s (surprisingly) many light hearted moments.

Leopoldstadt is the name of the Jewish ghetto in Vienna, but that is not where the Merz family live.

Their opulent apartment is on the posh side of town, crammed with excellent carpets and crystal glasses, thrumming with abundance and laughter. For Hermann in particular, life is good.

All those nasty pogroms and suchlike? Ancient history. He believes that he has been assimilated and fully accepted into bourgeois Vienna life; a man to be respected and admired by his peers. With his astrakhan collars and fine whiskies, Hermann has arrived. He is a patron of the arts! 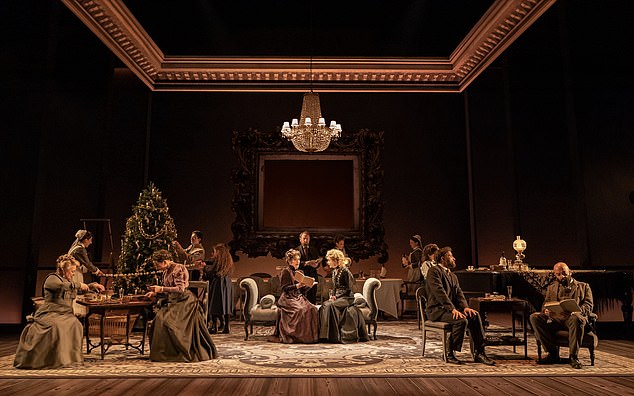 As the curtain opens, the Merz and the Jakobovicz clans appear to be posing for a photograph; a daguerreotype of doom, as it turns out

He gets Klimt to paint his wife and the portrait hangs on the drawing room wall. ‘My grandfather wore a caftan, my father went to the opera in a top hat and I have the singers to dinner,’ he cries. What could possibly go wrong?

The Jews may have turned Vienna into a crucible of culture, but it is not long before the darkening political climate begins to encroach. Hermann may not be in Leopoldstadt but he is still living in a ghetto. He just doesn’t realise it.

Leopoldstadt is Stoppard’s first new play for five years and certainly his most personal to date. Over a 55-year timespan that takes in revolution, impoverishment, the Anschluss, Kristallnacht and the Holocaust, the playwright addresses his Judaism directly for the first time.

There are no scenes inside a concentration camp and only one character in a Nazi armband, yet the implication of violence and hatred suffuses everything.

Nearly all the action takes place in the Merz apartment, which is gradually stripped of its riches as the play and history progress. In the end, there is nothing left but bare walls and ghosts, the looted Klimt long gone.

This is Stoppard at his most human and accessible, with a glittering script whose declamatory passages never quite overwhelm.

The staging is superb while the direction by Patrick Marber is simply splendid. There is a huge cast, expertly marshalled, including several children. The sweet little girls, with those white bows in their dark hair, are particularly heart-breaking.

A ribbon of merriment runs through Leopoldstadt, but of course there can be no happy ending, not now, not ever. Perhaps all one can do is sit back and enjoy the tremendous performance from Scarborough; a formidable actor who is the utter star of the show, the anchor in this sea of despair.

His depiction of Hermann’s optimism and hope in the early scenes is almost as affecting as his shuffling diminution towards the end. Yet despite the tragedy, Leopoldstadt is more about love than hate, which is its ultimate triumph.