Spare a thought today for John Morton, writer and director of the BBC’s self-mocking TV comedy W1A, whose third series began this week.

This is the fellow who has set himself the challenge of lampooning the Corporation’s labyrinthine bureaucracy and obsession with political correctness.

How can the poor man be expected to compete for absurdity with the real thing? Indeed, the BBC’s managers seem locked in a permanent contest with Mr Morton to see which of them can come up with the most sublimely fatuous idea.

Spare a thought today for John Morton, writer and director of the BBC’s self-mocking TV comedy W1A, whose third series began this week

First to score points in the latest round were the top brass at Broadcasting House, who launched a pre-emptive strike before Monday’s airing of the first episode of the new W1A.

The aim, we were told, was to make the Beeb ‘less posh’ — though this seemed an odd way of setting about it.

Yes, I realise that ignoring academic qualifications may make the BBC less educated (though it beats me why this should be thought a good thing).

I can also see that this ridiculous edict will infuriate young graduates who have worked hard — and accumulated vast student debts — in the hope of securing a job at our national broadcaster. The clear message to them is that they needn’t have bothered.

But less posh? Where does social class come into this? In an age when more than a third of school-leavers go into higher education, do BBC executives seriously think only toffs have university degrees?

But never mind. In Monday’s W1A, Mr Morton rose to the comic challenge, beating even this nonsensical initiative with a flight of fancy in which one of his characters proposed launching a new service, to be called ‘BBC Me’.

‘Like pretty soon no one’s going to be watching TV, ’ says ‘Michael Chung’, a Chinese American described as a ‘meta-genius’ from the New York office of a production company, Fun Media.

Pitching his idea to an enthusiastic BBC executive, he goes on: ‘This could be like a totally new voice. People kinda like load their own content on to the BBC brand. So the BBC’s owned by the people, right? So this could be kinda like giving them part of it back to play with, which could be really cool.’

Naturally, the Corporation’s female executives lap up this guff, saying BBC Me could be just the thing to boost the confidence of women suffering from body-image issues and low self-esteem. Game, set and match to Mr Morton, I thought. Surely Auntie’s real-life executives couldn’t come up with anything more ludicrous than his ‘BBC Me’?

Ah, but how I underestimated the Corporation’s limitless capacity to make a fool of itself, without any assistance from its comedy scriptwriters.

No sooner had the W1A spoof been broadcast than the BBC unveiled its own wizard proposal for appealing to young listeners.

Announced on Wednesday, apparently in all seriousness, the plan is for a ‘reverse mentoring scheme’, under which advisers in their teens or 20s will be appointed to teach senior staff how to make their programmes relevant to the under-30s. 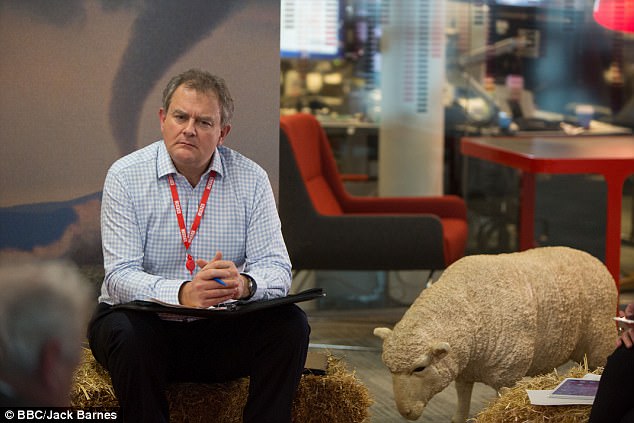 If I may be forgiven for borrowing a phrase from my colleague Richard Littlejohn, you couldn’t make it up. It’s a plan so irritating and daft that Mr Morton might just as well pack away his pen and cancel the rest of his new series.

Writing in his blog, former Labour Cabinet minister James Purnell — who is now the Beeb’s £295,000-a-year director of radio and education — says he hopes the scheme will help the Corporation compete with large companies such as Facebook and Amazon.

‘The idea came from a group of young BBC employees who pointed out that in our content-making areas, the percentage of senior leaders under 30 is particularly low,’ he writes.

‘In 2016/17, it was only 0.1 per cent, which maybe doesn’t sound unusual until you think that the founders of Google, Amazon, Facebook and Apple were all 30 or under.’

Yes, I know the latest figures show people aged 16 to 34 are increasingly uninterested in the BBC’s output. Even Radio 1, which has a target audience of 15 to 29-year-olds, now has an average listener age of 33.

But if Mr Purnell seriously thinks he will reverse this trend by paying callow youths to tell their elders how to do their jobs, he must be off his head.

In pointing out the crass folly of his scheme, it’s hard to know where to begin. For one thing, it’s plain silly — and more than a little condescending — to suggest that any random teen or twentysomething, plucked off the streets, can be taken to represent an entire generation.

If my 24-year-old son were appointed to advise John Humphrys, for example, he might tell him the best way to engage the attention of the young would be to stop jawing on about politics, and talk about football instead.

But other members of his generation have other interests. Take my 26-year-old, who can’t get enough of Jeremy Ruddy Corbyn. (Not that the BBC will be tempted to hire any of my sons; for though there’s not a toff among them, I fear all four have university degrees).

But this scheme is not just patronising to the young.

Has Mr Purnell considered how it will go down with his senior staff, who will have to put up with being bossed around by mentors still wet behind the ears?

It’s not as if people of my generation, ancient though I am, are so short of opportunities to study the tastes and behaviour of the young that we need someone specially appointed to teach us what makes under-30s tick.

Why, even John Humphrys, at the venerable age of 74, has a 17-year-old son he can grill about it any time he likes.

Speaking for myself, I know I wouldn’t take kindly to having a spotty teen inflicted on me, to tell me how to make my columns more appealing to the young (use more street slang, perhaps, or be nicer about Jean-Claude Juncker?)

As far as I’m concerned, they can like what I write or they can hate it — though I have to confess, at the risk of generalising, that the great majority of my sons’ generation seems to fall into the latter category.

On the very rare occasions when a twentysomething says anything flattering about my writing, it always takes the form: ‘My grandmother likes your column.’ That’ll do me fine.

Which brings me to my final objection to Mr Purnell’s mentoring scheme: it seems to spring from a mind utterly empty of ideas about the purpose or direction of the BBC.

Leave aside the question of why the Corporation should wish to compete with Facebook or Amazon, when its job should surely be to provide distinctive programmes, unavailable from commercial broadcasters.

In my experience, it’s always a bad sign when any media organisation — or political party, for that matter — seeks to find out what people want, and then tries to supply it. This is the focus group mentality that helped destroy New Labour.

As Groucho Marx put it, foreshadowing Tony Blair and Mr Purnell: ‘Those are my principles, and if you don’t like them . . . well, I have others.’

Wouldn’t it be far healthier for the BBC if it had a head of radio and education who knew what sort of programmes to make, without having to ask a nipper to tell him?