Two children’s parties from our sons’ early boyhood will stick in my mind to my dying day.

The first was the occasion when my wife went to fetch one of the four from a schoolfriend’s birthday bash, where she witnessed a scene straight out of that goriest of movies, Reservoir Dogs.

As Mrs U recalls it, the birthday boy’s mother ran down the path from the front door to greet her in hysterics, half laughing helplessly, half crying in horror.

Inside the house, there was blood everywhere, with a dozen traumatised children trembling in the kitchen, and the hired entertainer scowling and cursing in the passageway.

It turned out that the host’s family cat had attacked, mauled and murdered the magician’s rabbit, which it was now eating. I wouldn’t be surprised if some of those children who saw it all have been in therapy ever since.

A scene from Quentin Tarantino’s 1992 film Reservoir Dogs. A children’s birthday party resembled a famous bloody scene from the movie

The other party I’ll never forget was one we threw ourselves for son number three, when he turned eight.

To keep up with the Joneses, we’d broken with the habit of a lifetime and employed an entertainer to keep his young guests amused.

Since money was exceptionally tight at the time, I’d chosen the magician who charged the lowest hourly rate in South London. It soon became clear why this seedy-looking old man couldn’t command top dollar for his services.

I didn’t particularly mind that his jokes and tricks were toe-curlingly lame. After all, eight-year-olds are not the most discerning of critics.

For the first few minutes of his act, I was gratified to see his young audience entering into the spirit of the occasion, laughing appreciatively at his attempts at humour and dutifully gasping in wonder when he suspended his magic wand in mid-air, with an all-too-visible thread of black cotton.

No, what convinced me that he was in the wrong job was his inability to conceal his visceral loathing of children.

This burst to the surface when our sons’ guests laughed uproariously at one of his feeble jokes.

He turned on them and roared with undisguised venom: ‘Shut up the lot of you! There’s a difference between having fun and being silly!’

His audience sat through the remainder of his act in nervous, chastened silence.

I thought of that paedophobic magician this week, when I read of the ‘Bad Santa’ — star of the Father Christmas Grotto Experience at the Corn Exchange in St Ives, Cambridgeshire — who is said to have torn off his red cap and white beard and yelled at 50-odd children: ‘Get the f*** out.’ 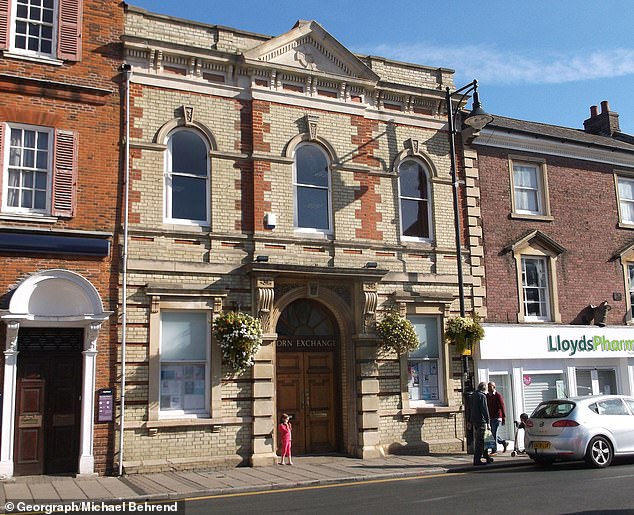 Corn Exchange in St Ives, Cambridgeshire, where a ‘Bad Santa’ who is said to have torn off his red cap and white beard and yelled at 50-odd children: ‘Get the f*** out’

To be fair to the unnamed villain, accounts differ over precisely what it was that provoked his profanity, for which the organisers of the event have apologised.

Some suggest he was merely exasperated by the infernal noise coming from a children’s disco downstairs — and that he lost his rag completely when a fire alarm went off, adding to the din.

Said Stuart Wilkin, a DJ who saw what happened: ‘He probably sat there trying to talk to the kids with thumping music playing and was p***ed off. The fire alarm going off was probably the final straw.’

For the defence, on the other hand, champions of the accused say he momentarily let his tongue run loose in his laudable anxiety to get the children out of harm’s way when he heard the alarm.

Well, I wasn’t there, and so I won’t presume to judge his motives. All I will say is that as a general rule, we should try to avoid shouting obscenities at children (though I have to admit that I’ve been known to swear at my own).

But at the same time, there’s something so gloriously incongruous about a foul-mouthed Father Christmas that I find it hard to suppress a chuckle.

I had that same difficulty yesterday, when I read about the real-life Grinch Who Stole Christmas.

This was the mysterious, hoodie-clad stranger, apparently an elderly woman, who was caught on CCTV using a pair of wire cutters to snip through the festive lights with which Dan Hubbert of Hull had decorated a tree in his front garden.

Leave aside that in my experience, Christmas tree lights have an infuriating habit of going out of their own accord, without any help from curmudgeonly old ladies armed with wire cutters.

(Which of us hasn’t spent hours of every festive season twiddling bulbs to discover which has burnt out or come loose, plunging the whole lot into darkness?)

The truth is that vandalism should never be a laughing matter, whatever the age of the perpetrator. 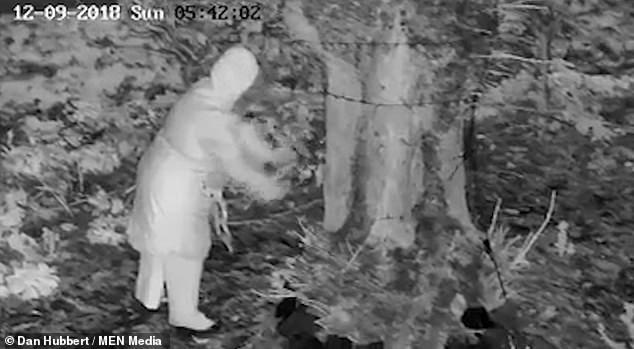 Mr Hubbert, a 41-year-old father of two, is surely justified in saying the guilty party should pay him the £20 replacement cost of the lights — all the more so, since he’s a patently decent man, who insists he would have taken them down himself or at least switched them off at night if a disgruntled neighbour had complained to him directly.

Yet though he’s clearly in the right, I can’t help feeling a twinge of wry amusement over that eccentric old lady, stealing out at dead of night to destroy Mr Hubbert’s handiwork.

Did she think she was striking a blow against cruelty to trees? Or, more likely, was she just fed up with the forced jollity of Christmas, and wanting to spoil the fun for everyone else, perhaps muttering ‘bah humbug’ to herself as she snipped those wires?

But I must tread very carefully here, since we’re not allowed to laugh at anything these days — as the Russian comedian Konstantin Kisin discovered when he was booked for a charity stand-up gig at London’s School of Oriental and African Studies. He tells his own story on the page opposite.

My only surprise was a significant omission from the near-comprehensive list of topics he would have been banned from joking about, had he gone ahead with the gig: ‘Racism, sexism, classism, ageism, ableism, homophobia, biphobia, transphobia, xenophobia, Islamophobia, anti-religion or anti-atheism.’

How can those snowflake students have forgotten to prohibit jokes about vegans and vegetarians — or were these outlawed by the general instruction that comedians performing at SOAS should be ‘respectful and kind’?

I confess that only a few years ago, I myself would have laughed at this week’s news that vegans in Bristol have held a ‘peaceful, love-based vigil’ to mark the slaughter of nine turkeys that were to have been sold for Christmas dinner in a charity auction. 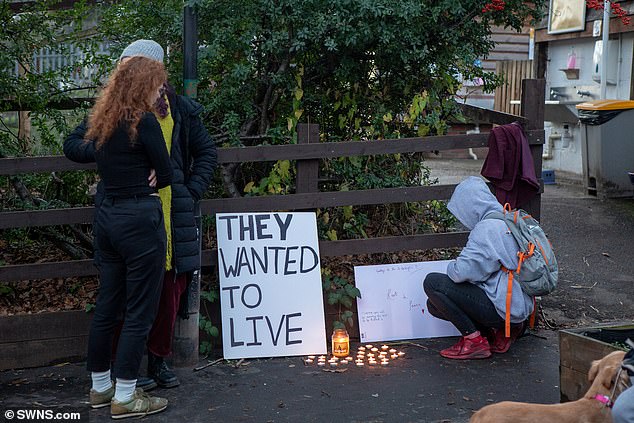 A group of vegans hold a vigil for nine turkeys from St Werburghs farm, Bristol, which were killed for Christmas diners

Indeed, I’m still inclined to think their reaction slightly absurd, at a time when shops everywhere are packed with dead animals for human consumption. Do vegans spend their whole lives in paroxysms of grief for the fallen? Perhaps so.

Yet as the years have gone by, I’ve begun to see their point of view, as scientific evidence mounts that animals have a huge amount in common with human beings.

We used to be told they didn’t have feelings or suffer pain in the same way as us. Yet all the latest research suggests they do.

Then the big difference between us was that animals didn’t use tools. Yet now we know all sorts of them use sticks and stones to forage for food, often in ingenious ways.

Which leaves only the claim that human beings alone in the animal kingdom have souls — but how can we prove that, one way or the other?

Enough to say there are respectable arguments for believing that killing animals is akin to murder.

Mind you, I’m too much of a carnivore, with a cat’s instinct for eating a rabbit, to give up meat myself. And I’ll be feasting with relish this Christmas on whatever carcass is set before me.

But in the spirit of the season, I won’t be laughing at vegans any more. Whatever your choice of diet, I wish one and all a very happy Christmas — and that goes for foul-mouthed Santas, child-hating magicians and grumpy old ladies with wire-cutters, too.