TOM UTLEY: The first words to my wife were ‘I’ll have a pint… and your hand in marriage’

Over the years, people have sometimes asked if I ever make things up about family life in my articles. I suppose I should be mortally offended at the suggestion that I may be a liar, but I won’t pretend I don’t understand why they ask.

To some, it must arouse suspicion that week after week, I claim to have personal experiences that appear uncannily relevant to items in the news.

When the papers are full of stories about rights for disabled people, for example, you’ll find me stating that my father was totally blind from the age of nine. When politicians discuss the plight of single mothers, up I’ll pop, saying one of my sisters never got round to marrying the father of her daughter (not least, because he was — and as far as I know still is — married to somebody else).

The boomerang generation? I’ll tell you that our own sons are forever bouncing back to the family nest, just when we thought we’d got rid of them for good. Adoption? I’ll claim my brother’s three beloved children are all adopted.

For good measure, I’ll even report that when I met her in 1979 she was working as a barmaid at my local, where the very first words I addressed to her were: ‘A pint of bitter, a packet of cheese and onion crisps and your hand in marriage, please’ (stock image)

Civil partnership rights for siblings? I’ll write that my two elderly sisters have lived together throughout their adult lives — yet by a gross injustice, they’re offered none of the tax advantages extended to couples in sexual relationships, gay or straight, who don’t happen to be related by blood.

If public transport is in the news, here I’ll be, claiming that Mrs U used to drive double-decker buses in London. If tax avoidance is topical, I’ll say she worked for an accountant who specialised in that very subject, looking after notorious tax avoiders such as St Bono of U2. If my subject for the week is abortion, I’ll write that she now works for the Society for the Protection of Unborn Children.

For good measure, I’ll even report that when I met her in 1979 she was working as a barmaid at my local, where the very first words I addressed to her were: ‘A pint of bitter, a packet of cheese and onion crisps and your hand in marriage, please.’

What can I say when people question my veracity, apart from protesting that every word I’ve written is true? My father really was completely blind from early childhood (and, yes, he did write speeches for Margaret Thatcher, who did indeed describe him after his death as: ‘Quite simply, the most distinguished Tory thinker of our time’).

In the same way, my three siblings’ family set-ups are exactly as I’ve described. It is also God’s own truth that my wife has had an extremely varied career, as a barmaid, bus driver and secretary to all sorts of people — including, since you ask, a wildly eccentric Italian restaurateur, an MP, a tax lawyer, a military historian, the publisher of Andrew Morton’s sensational book Diana: Her True Story and, yes, she now works for the boss of SPUC. All this, and for many years when the boys were growing up she was a stay-at-home mum.

But then there is nothing particularly unusual about my family. Or to put it another way, we are wholly unremarkable in our remarkableness. For such is the variety of human existence that there is no such thing as an ordinary family.

Indeed, few of us have to look far beyond our close friends and relatives to find people who have undergone extraordinary experiences, triumphs and tragedies — people in unconventional relationships, others who have fascinating obsessions or surprising achievements or people with tales to tell about maddening brushes with officialdom or the law.

What I’m saying is that in writing about family life — even a humdrum, suburban family life like mine — there’s no need to resort to fiction, since every family has real-life stories and characters enough to fill acres of newsprint on just about any subject under the sun.

But I have another reason for sticking as rigidly as I can to the truth (though when my memory lets me down — as my sons are all too quick to tell me — I admit that I’ve occasionally got the odd detail wrong).

Yes, I understand the temptation to embellish a story in order to make it more interesting. But the fact is that the truth is so much easier to remember than a falsehood. And though I’d like to claim it’s pure piety that keeps me on the straight and narrow, it’s also the terror of telling a lie and then forgetting all about it, only to be caught out in an inconsistency later.

As Sir Walter Scott so wisely observed: ‘Oh what a tangled web we weave when first we practice to deceive!’

This week, a study by a U.S. university confirms what so many of us have found — that lying, and then remembering the lie, requires much more mental effort than simply coming out with the truth.

The researchers at Brandeis University (no, me neither) find that as our brains slow down with age, we become less accomplished at lying — and far more likely to be caught out when we do it.

Thus, we older folk should be very wary of making something up in order to get out of an unwelcome invitation. For example: ‘We’re so sorry, we won’t be able to make it to your party because we’re going to the theatre that night.’

The danger is that the next time you meet your spurned hostess, she’ll ask: ‘How was the play?’ And before you’ve collected your thoughts and remembered the lie, you’ll hear yourself answering: ‘What play? We haven’t been to the theatre for months.’

Mind you, we’ve all met young people who are rotten at lying, too. It starts from the earliest years, when the toddler with the chocolate-smeared face claims it must have been his brother who ate all the Cadbury mini rolls.

Moving up the age scale, I once had a colleague in his 20s who was forever taking days off work to attend his grandmother’s funeral. Most of us have only two grandmothers. He must have had about six.

But I’d like to think it’s not only because we become even worse at it, and more likely to be caught out, that we older people tell fewer lies than the young. Isn’t it also because we feel less need to excuse our behaviour, to conceal our innermost thoughts or impress others by exaggerating our achievements or qualifications?

I’m not saying any of us should be honest at all times, telling the missus her new dress makes her look ridiculous or informing our dinner-party hostess that the meal she’s served up is uneatable.

And I’m certainly not suggesting we should all be as truthful as my great-uncle Pat, who would answer the question ‘How are you?’ with a long description of all his aches and pains, starting with his gouty toes and working upwards from there. Half an hour later, he would still have got no further than his dicky hips, pausing only for breath before moving on to his digestive problems and chesty cough. 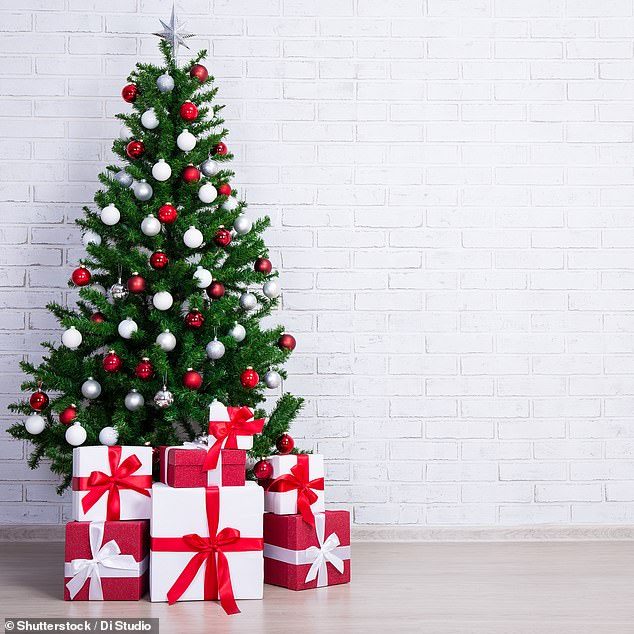 With Christmas on the way, however, we must all get into practice for lying, says TOM UTLEY

The correct answer to inquiries about our health is, and always has been: ‘Fine thanks.’

But the older I get, the less I feel the urge to pretend that I’ve read the book everyone’s talking about or to say I’m late for work because my train was cancelled, when in fact I’ve merely overslept after a heavy night at the local.

With Christmas on the way, however, we must all get into practice for lying, in preparation for the moment when we unwrap that garish tie or frock, contort our features into expressions of rapture and proclaim that it’s the smartest thing we’ve ever seen.

There are times and places for telling the unvarnished truth about what we think and feel. But whatever our ages may happen to be, Christmas definitely isn’t one of them.