Tom Watson accuses Labour activists of trying to force him out

Tom Watson last night accused Labour activists of attempting to force him out after he tried to clamp down on anti-Semitism in the party.

The party’s deputy leader spoke out after it emerged that local constituency bodies had submitted motions to next week’s party conference censuring him for ‘undermining’ Jeremy Corbyn.

Two of them criticise him for his role in efforts to deal with Labour anti-Semitism and go so far as to say he should stand down over his conduct.

Labour said the anti-Watson motions would not be debated because only policies and not internal party matters can be discussed at conference.

But the motions demonstrate the depth of anger against the deputy leader among Labour grassroots.

Last night, a source close to Mr Watson said: ‘These motions were submitted after Tom spoke out to try and solve the anti-Semitism crisis in Labour earlier this year.

‘A model motion had clearly been circulated as the wording on a number of them is identical.

‘It’s the right of constituency Labour parties to submit motions but it’s the duty of the deputy leader to do what he can to protect the party’s good name and try and work to find a way through the anti-Semitism crisis that has dogged Labour for too many years.’

Mr Watson is already facing a series of ‘trigger ballots’ to unseat him from his West Bromwich constituency, although he has won six out of six of them so far.

The final trigger ballot meeting yesterday forced him to miss a meeting of Labour’s ruling NEC. 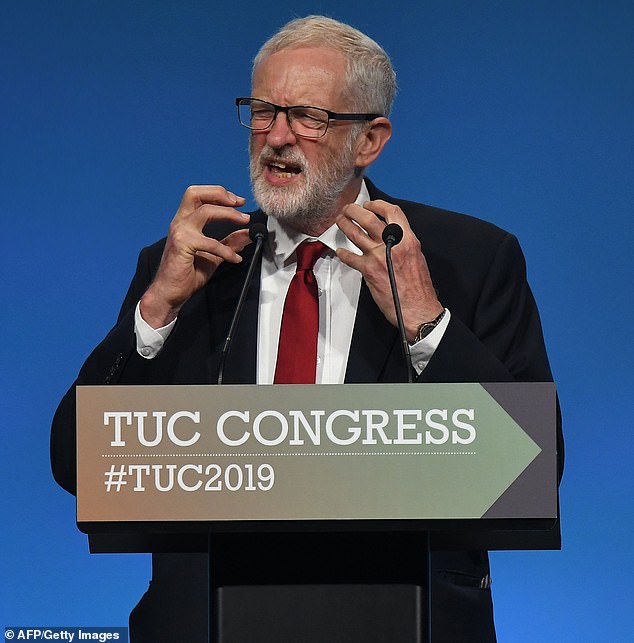 The deputy leader angered Corbynites earlier this year when he set up a group of Labour MPs to draw up different policy proposals to those of the Shadow Cabinet.

He has also made a number of speeches demanding Labour come out strongly in favour of Remain after any second referendum.

The motion states: ‘Under party rules, the deputy leader shall provide the leader with advice and support in achieving the goals of the party and deputise as requested.’

It goes on to criticise Mr Watson for apparently undermining the party general secretary’s attempts to tackle anti-Semitism by asking for all complaints to be forwarded to him.

A similar motion was laid by Easington constituency Labour party. Another said: ‘Staffordshire Moorlands CLP proposes that Tom Watson’s actions seek to undermine both the general secretary and the party leader, and are not compatible with his remit as deputy leader of the Labour Party.’

Separate motions from constituency parties called for an end to the rule where each Labour leadership candidate needs the support of 10 per cent of MPs because this gives them an effective veto over a Left-wing candidate.

Others demanded open selections to make it easier to get rid of MPs they do not like.

Last night, Labour’s ruling National Executive Committee decided that all sitting MPs would face ‘trigger ballots’ to potentially replace them even if there is a snap election.

MPs say it will force them to spend time in internal battles when they should be focusing their fire on the Tories.

The NEC also agreed a fast-track selection process for the seats of retiring MPs or those who have defected, which critics say will deny local members a say and will allow Mr Corbyn to impose Left-wing candidates.