The tomb of Saint Nicolas, the inspiration behind Santa Claus, has been discovered after archaeologists uncovered the remains of an ancient church in Turkey that was submerged by rising sea levels in the Mediterranean during the Middle Ages.

The holy figure, who lived between 270 and 343 AD, is most famous for inheriting money that he gave away to the poor and specifically the story about how he gifted three girls with bags of gold to save them from a life of prostitution.

Another church was built on top of the ancient basilica’s foundation to protect the saint’s tomb, but it was not until recently did archaeologists uncover mosaic and stone flooring from the previous sanctuary under the one that stands today that led them to St Nicholas’ final resting place.

The discovery support claims that St Nicolas lived and died in Turkey and the team also announced that the same stone flooring found hiding beneath layers of sediment was also walked upon by the Christian figure, Demirören News Agency reports. 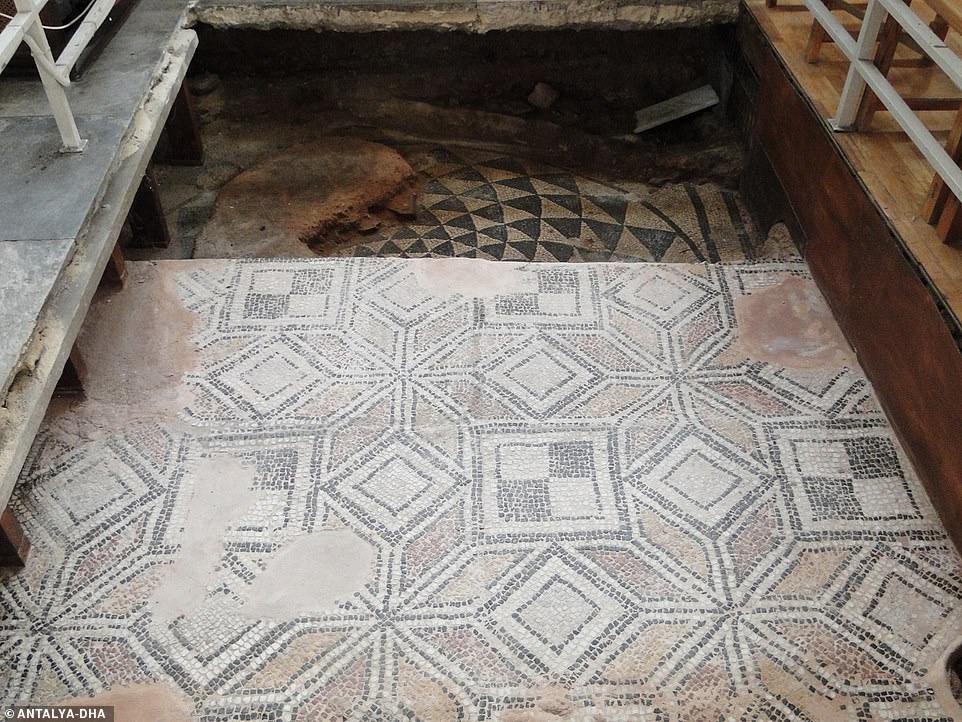 The Byzantine church built over the ancient foundation was a place of worship for Orthodox Christians between the 5th and 12th centuries and is surrounded by statues of St Nicholas.

It was also added to the list of UNESCO World Heritage sites in 1982.

The ancient church was first believed to have been discovered in 2017 by researchers who conducted electronic surveys under St Nicholas church, which revealed gaps between the floor and the ground.

The team had announced that they may have found the tomb of Saint Nicholas, but were still working to carefully remove the Byzantine church’s flooring to not damage it.

Osman Eravsar, the head of the provincial cultural heritage preservation board in Antalya, told Demirören News Agency last week: ‘The first church was submerged with the rise of the Mediterranean Sea, and some centuries later, a new church was built above. 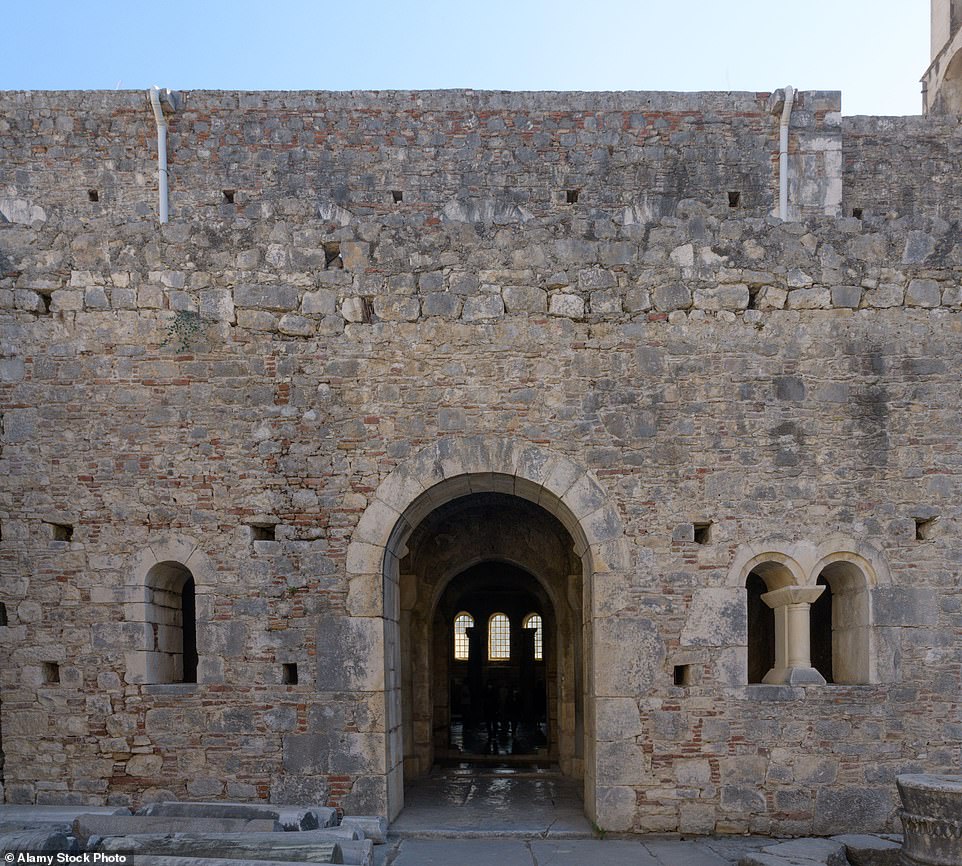 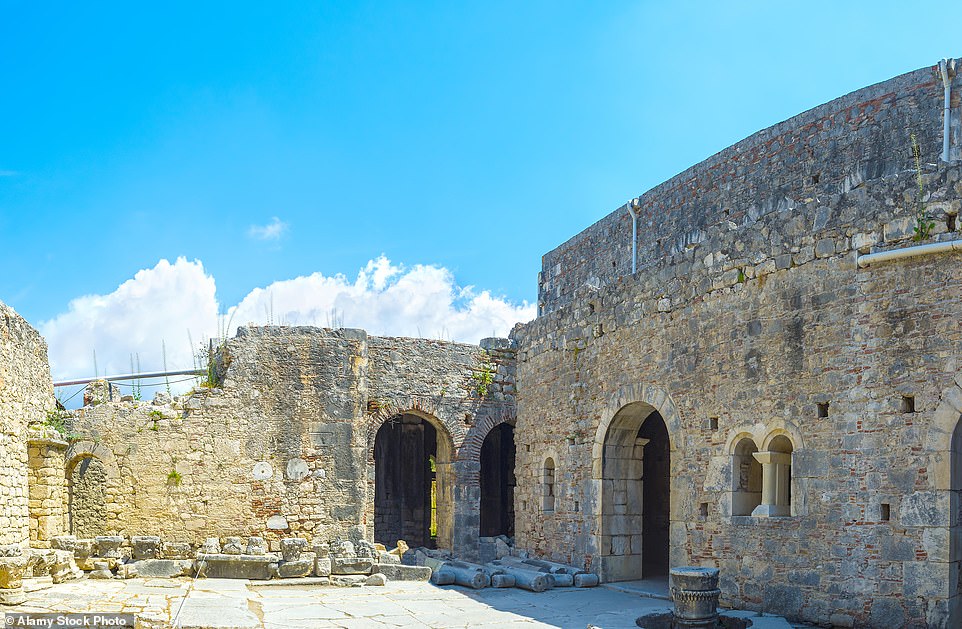 The grey-stone building sits in a depression which is several miles deep. Although it is weathered, many of the marble columns that once stood around the church are still found on the grounds 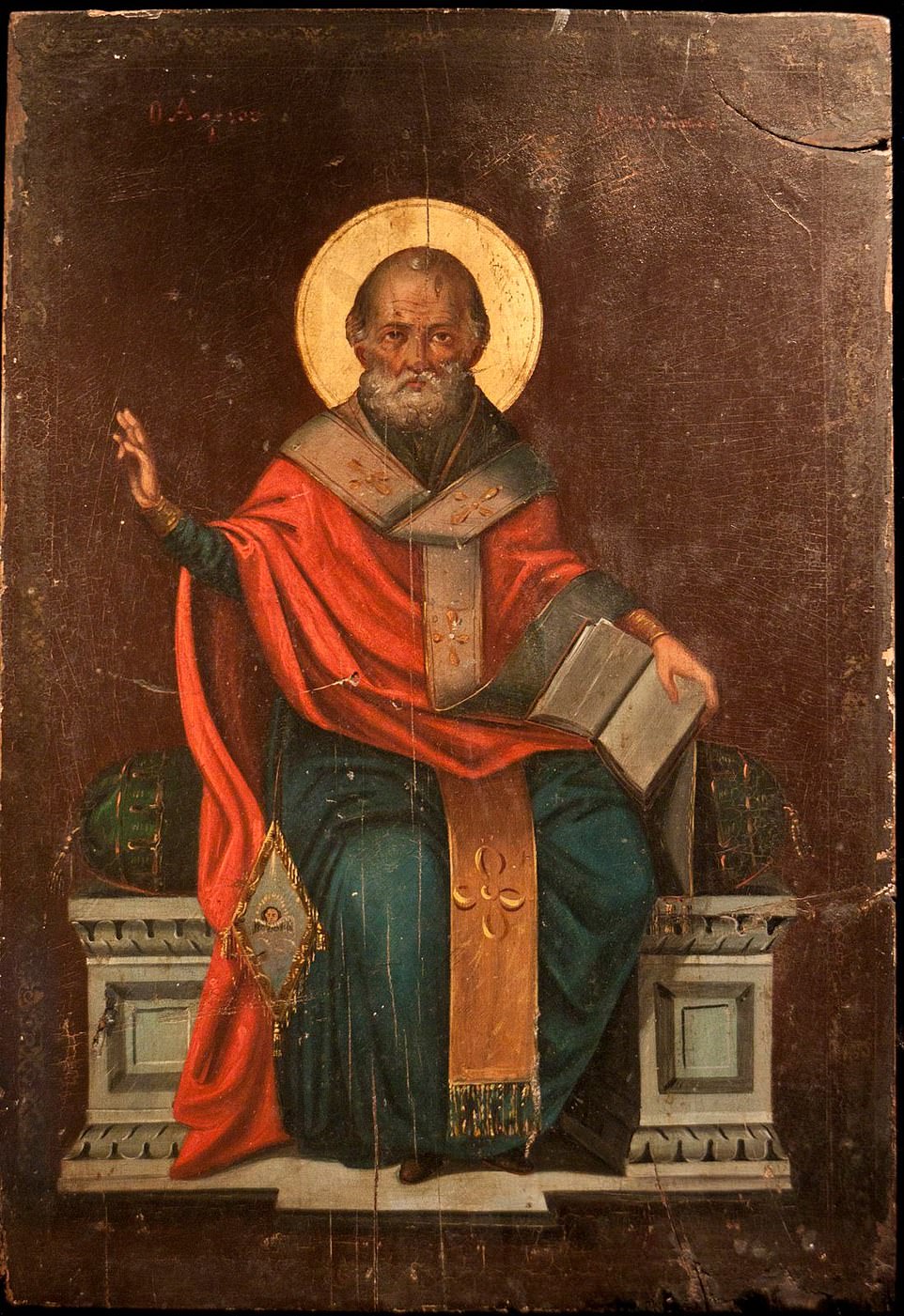 St Nicholas, who lived between 270 and 343 AD, is most famous for inheriting money that he gave away to the poor and specifically the story about how he gifted three girls with bags of gold to save them from a life of prostitution 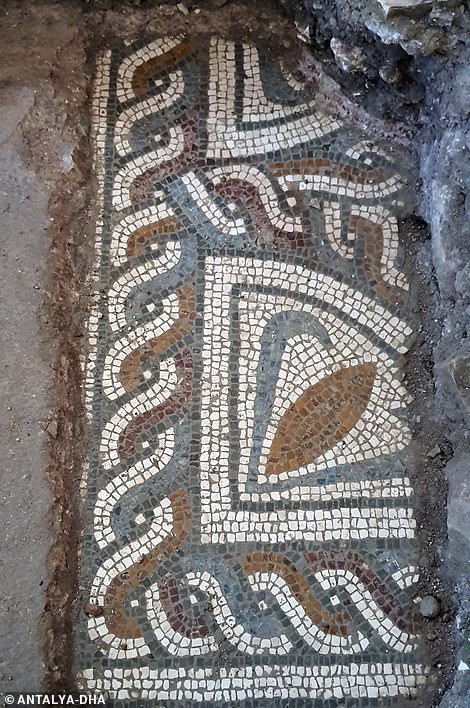 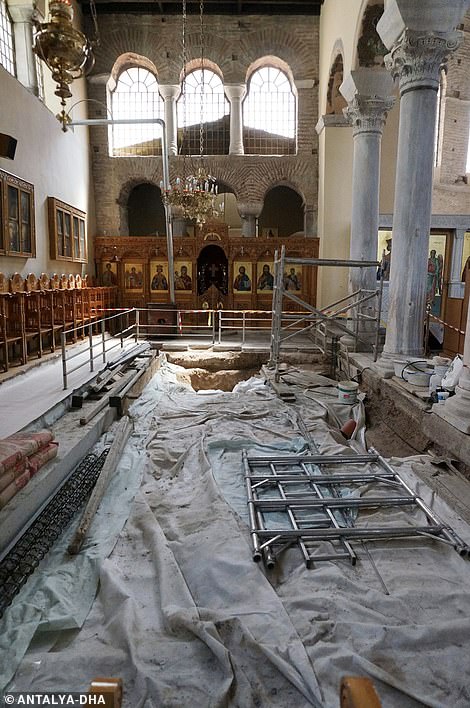 The team also announced that the same stone flooring was once walked upon by St Nicholas. Pictures is the original foundation recently uncovered by archaeologists working at the site in Turkey

St Nicholas, who is famous for his gift-giving and charity to the poor, was born in the village of Patara to wealthy parents who died in an epidemic and left their son a large fortune. 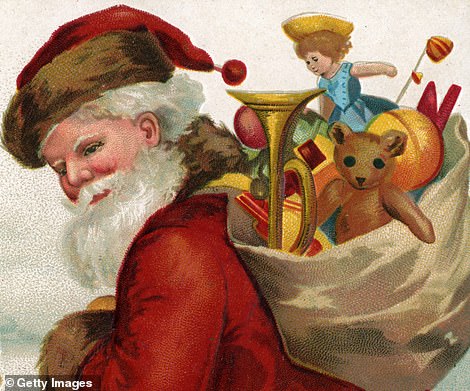 St Nicholas is the inspiration behind the story of Santa Claus

As a devout Christian, St Nicholas followed Jesus’ teaching of selling all worldly possessions and giving to the poor – and that is what he did.

However, these ideas are not presented in historical documents, but have been shared in stories.

He did become bishop of Myra in the 4th century, but was imprisoned shortly after by the Roman emperor Diocletian at a time when Christians were persecuted and then released under the rule of Constantine the Great.

Records do show that St Nicholas was buried at the church built in his name.

However his body’s exact whereabouts has always been a mystery.

Researchers now believe at the time of his death in 343 AD, St Nicholas was interred at the church in Demre, where he lay undisturbed until the 11th century.

Previously, it was believed the 1,674-year-old remains were smuggled to the Italian city of Bari by merchants in the year 1087.

However, Turkish archaeologists are now suggesting the wrong bones were removed – and the ones that went to Italy belonged to an anonymous priest.

He was buried in his church at Myra, and by the 6th century his shrine there had become well known.

In 1087 Italian sailors or merchants stole his alleged remains from the tomb and took them to Bari, Italy.

The team also uncovered the fresco of Jesus recently. The discovery of the tomb puts to rest the mystery of where the saint was laid to rest 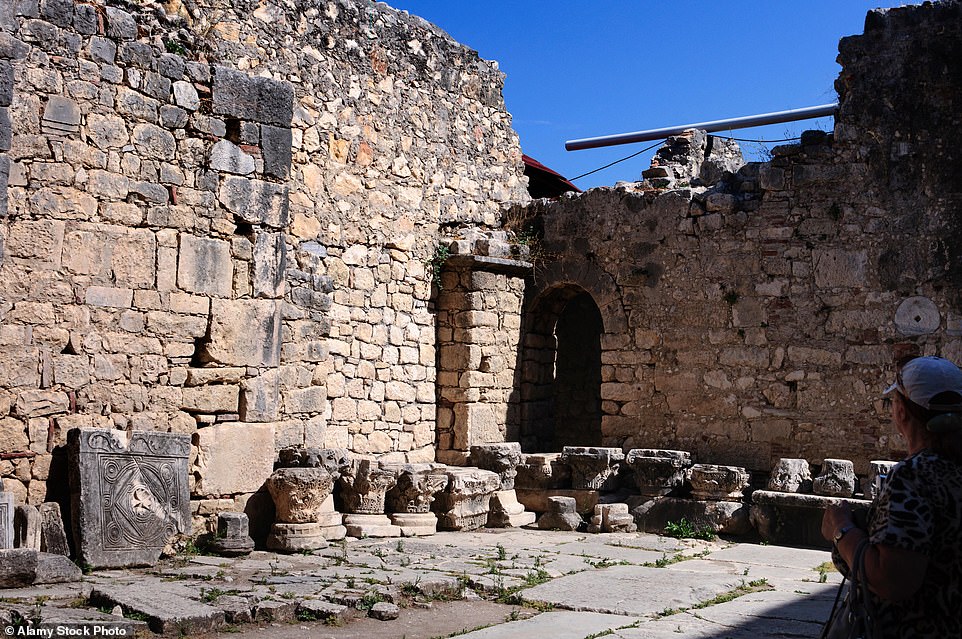 The Byzantine church was also damaged and restored several times through the 8th and 9th centuries. It was also flooded and buried, leaving it hidden for decades until it was rediscovered in 1956

Nicholas’s relics remain enshrined in the 11th-century basilica of San Nicola at Bari, though fragments have been acquired by churches around the world.

Santa Claus is based on stories about St Nicholas who built a reputation for performing miracles and secretly giving gold to the needy.

The name Santa Claus evolved from Nick’s Dutch nickname, Sinter Klaas, a shortened form of Sint Nikolaas, which is Dutch for Saint Nicholas.

The Byzantine church was also damaged and restored several times through the 8th and 9th centuries, according to the heritage preservation board in Antalya.

The organization notes that it had major rebuilds by Constantine IX in 1043 and Tsar Nicholas I in 1862, who added a tower.

The church was also flooded by the Demre River and eventually buried until it was rediscovered in 1956 and is now a destination for many pilgrims seeking to pay homage to St Nicholas.

THE ORIGINS OF SANTA CLAUS

St Nicholas was Bishop of Myrna, in what is now Turkey, in the 4th century, and was known for his generosity towards children.

He was known for his secret gift giving, such as putting coins into the shoes of people who left them out for him.

This practice is still celebrated on his national feast day, December 6.

The bishop was popularized in 6th century Europe as Father Christmas, who secretly gave gifts to young children.

In modern depictions, Saint Nicholas is presented as a portly old man dressed in red and white with a bushy beard.

But some have suggested the original character wore green, and that his modern red-and-white colors are the result of a 1930s marketing campaign from soft drinks brand Coca Cola.