Fans lined the street outside Hope Church in Lytham, Lancashire, to pay their final respects to the Cannon & Ball star, who passed away at Blackpool Victoria Hospital on October 28.

Mourners wearing red braces – a nod to Ball twanging his braces while saying: ‘Rock on, Tommy’ – congregated outside the church to honour the iconic UK entertainer.

His comedy partner Cannon, 82, was among the mourners at the service, which was private and invite-only due to England’s ongoing shutdown and restrictions on funeral gatherings.

Cannon said after Ball’s death: ‘Rock on, my good friend, I can’t believe this, I’m devastated.’ He later tweeted: ‘I’m absolutely devastated, I’ve lost my partner, my best friend and the funniest man I know.’

A table with a book of condolence, hand sanitiser and donation box for the Blue Skies Hospital Fund and Lowther Pavilion was set up on the pavement where fans gathered.

Tony Callison, who was among those lining the streets, said he used to drink with Ball in local bar The Sunday Club. He said: ‘You had a good laugh when he was in because you couldn’t not.

‘He was a true gent and a funny man but he was also very helpful. I had a hard time last year where I needed help and Bobby was there for me as if he was a friend. He still had an awful lot to give, it wasn’t his time.’

Zoe Robertson, who owns apartments which Ball stayed in with wife Yvonne when he moved to Lytham, said: ‘They were just the nicest people ever and since they’ve been in Lytham they’ve just become part of the community.

Comedian Tommy Cannon arrives at Hope Church in Lytham Saint Annes, Lancashire, ahead of the funeral of Bobby Ball 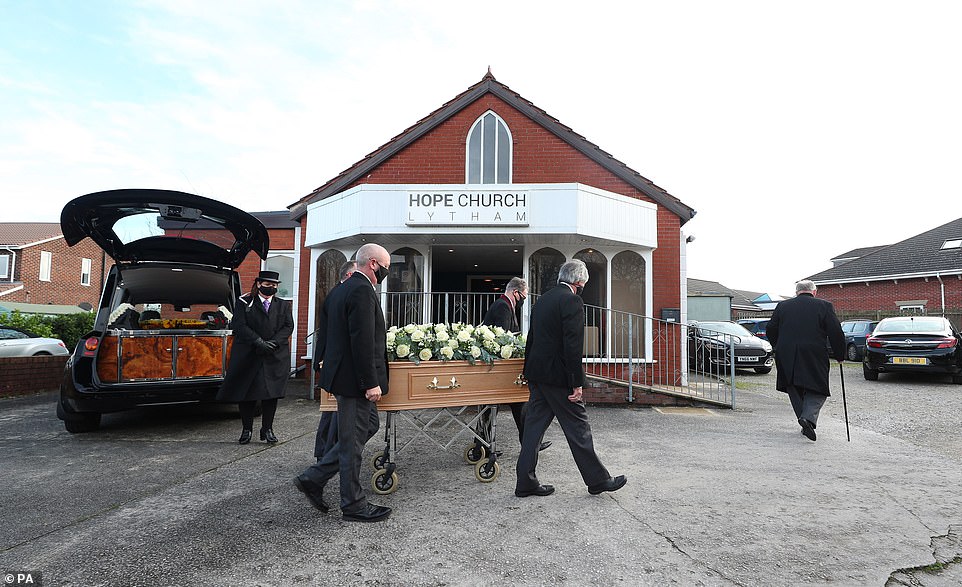 The coffin of entertainer Bobby Ball is taken into Hope Church in Lytham Saint Annes, Lancashire, for his funeral service 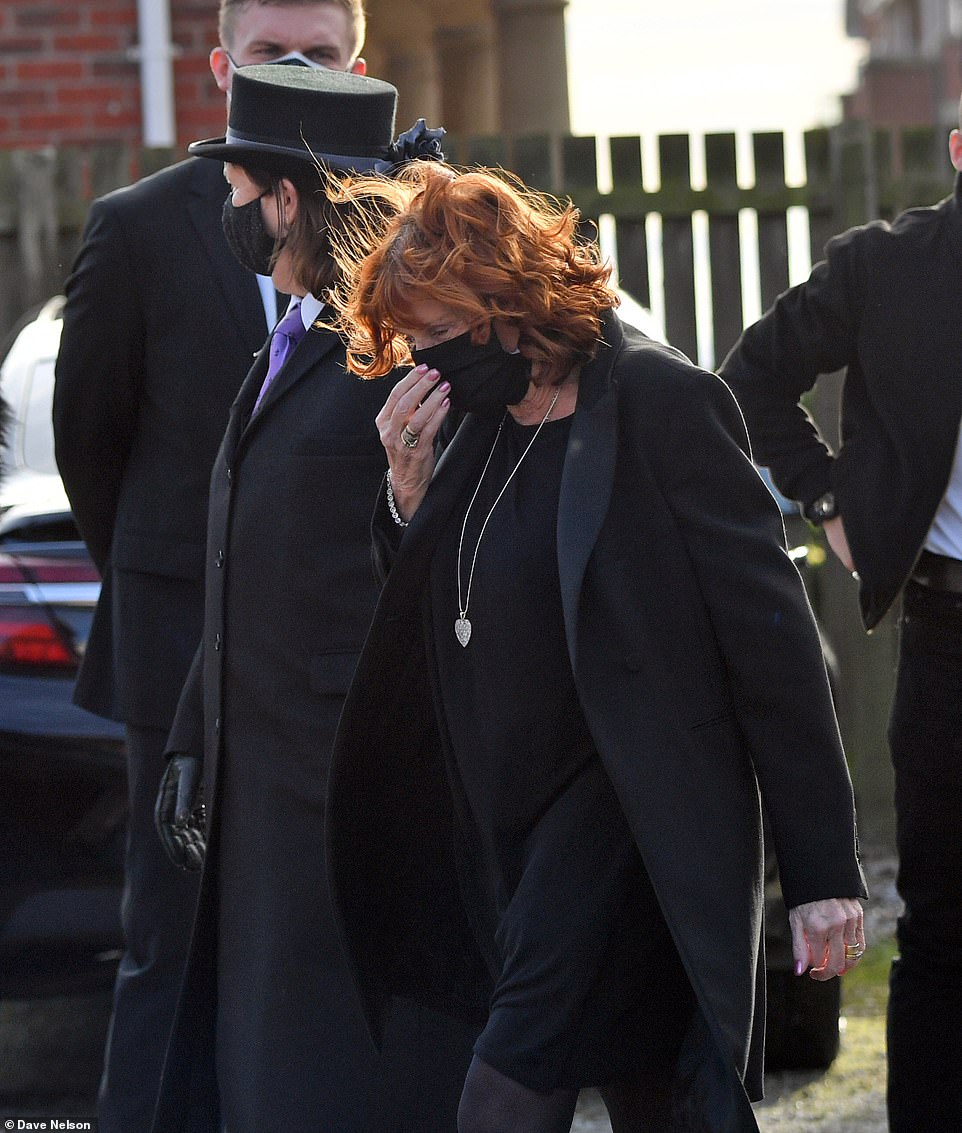 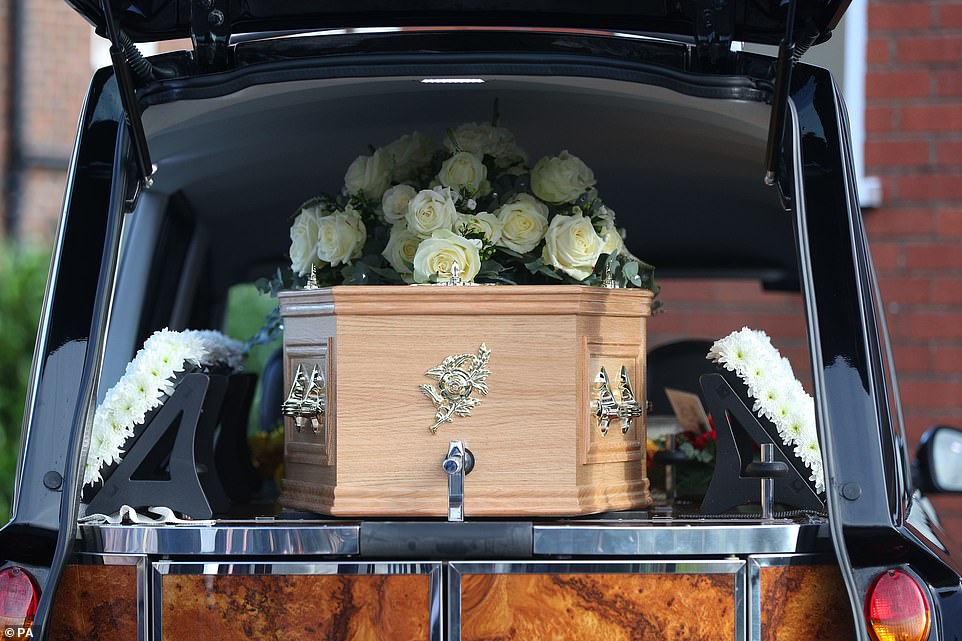 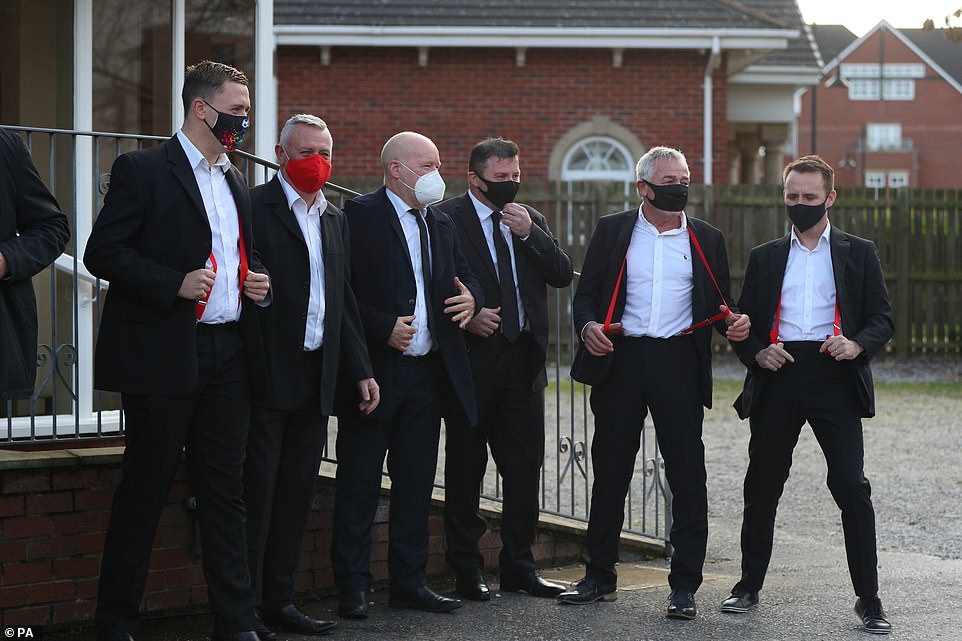 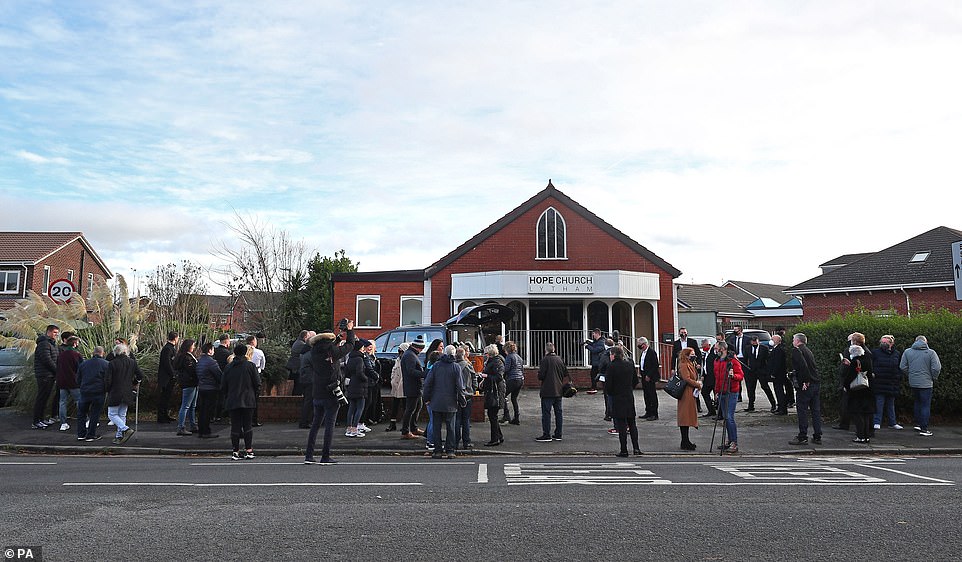 People outside Hope Church in Lytham Saint Annes, Lancashire for the funeral of entertainer Bobby Ball 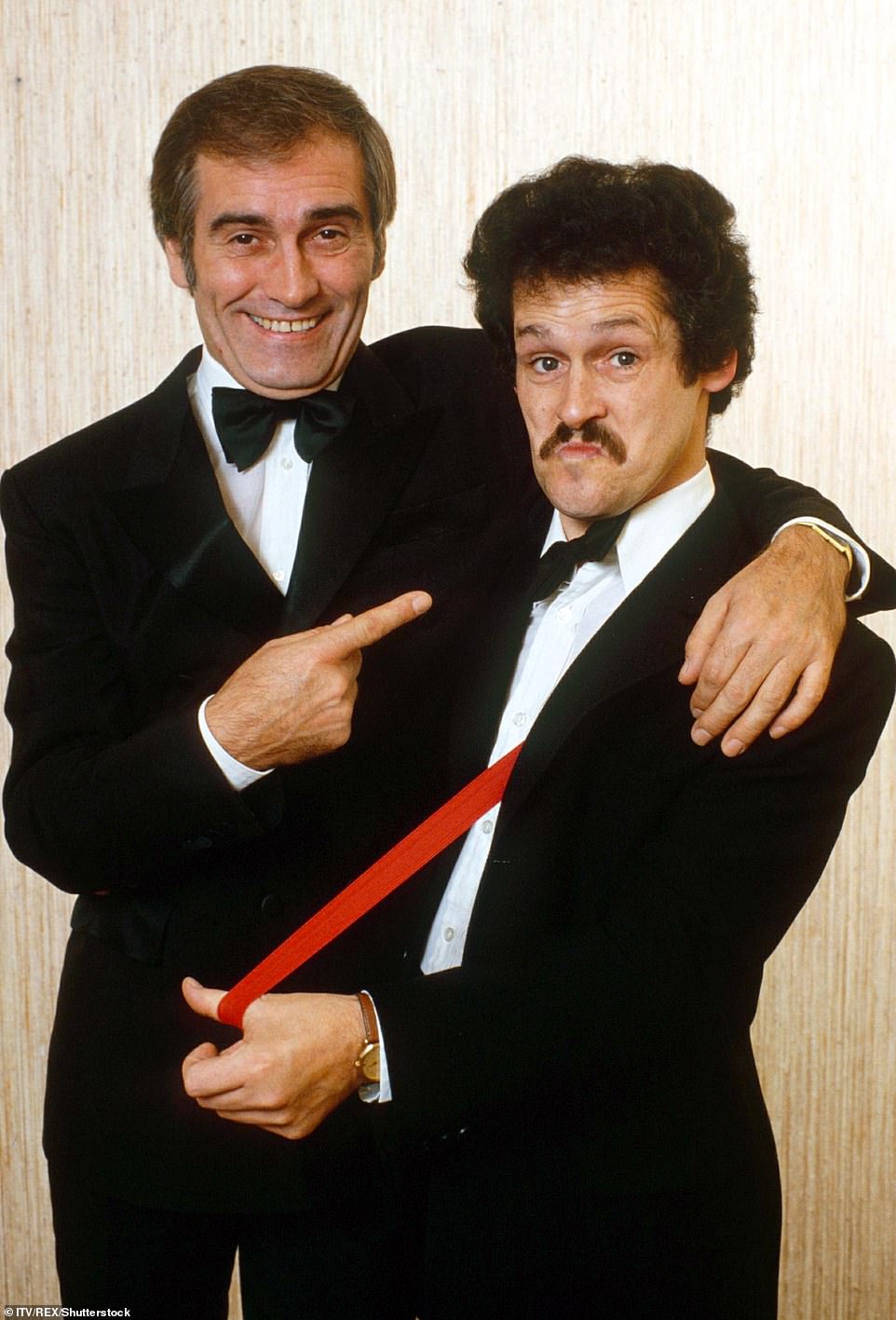 Ball was born Robert Harper on January 28, 1944 and found fame on the The Cannon & Ball Show from 1979 to 1988 opposite Cannon. Oldham-born Ball met Cannon, real name Thomas Derbyshire, while he was working in a factory as a welder 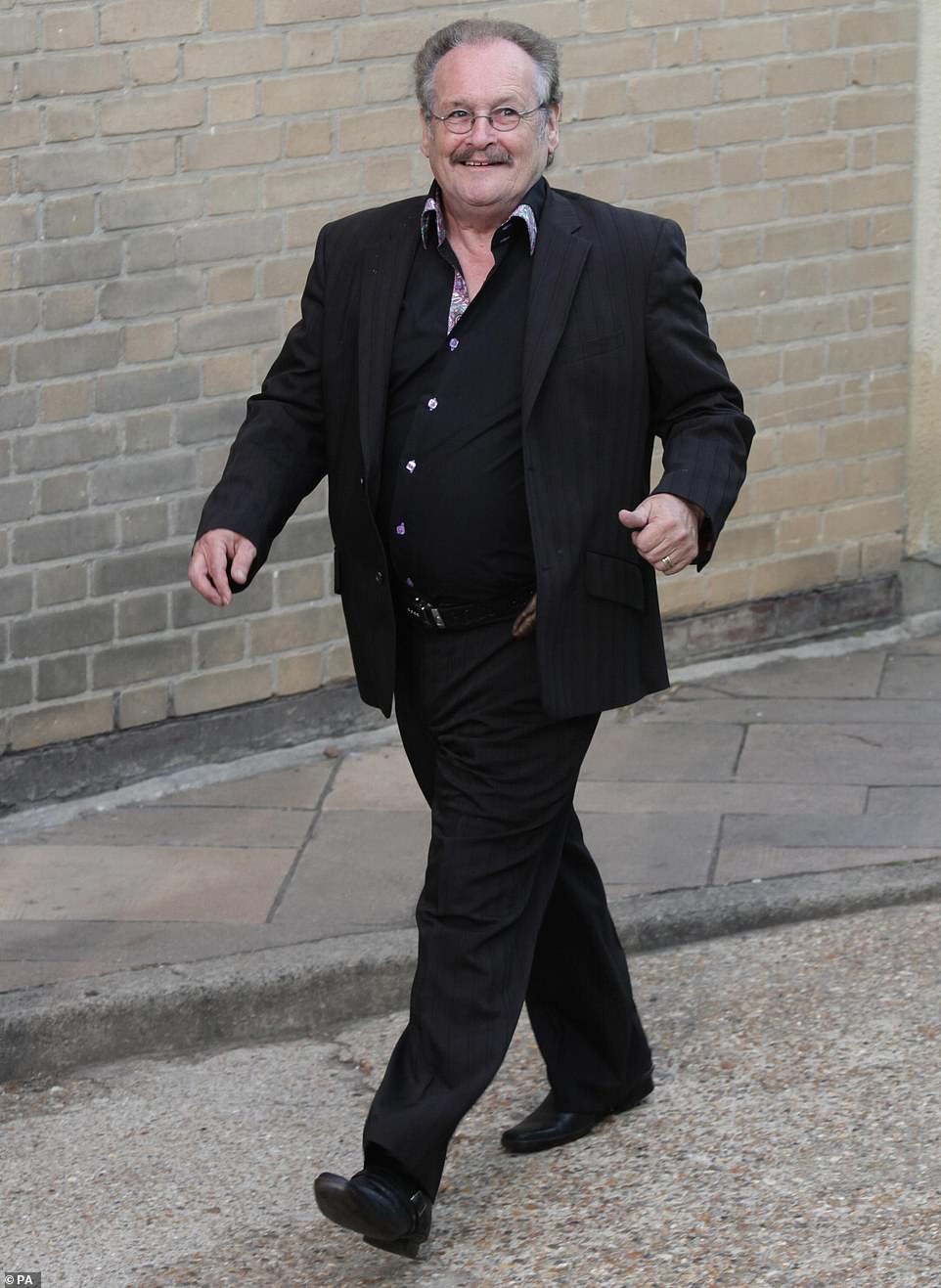 Tommy Ball at the final of Britain’s Got Talent in Wembley, North West London, in June 2010

‘He was one of the kindest guys. He will be so missed and it is so sad. He couldn’t help himself from telling jokes. In the last lockdown we used to see him sitting on his bench and he would always have a joke.’

Memorial cards left outside the service said Ball was a deeply loved husband and an adored grandfather and great-grandfather. They called him a ‘much-loved friend to many and a hugely respected character’.

Cards read: ‘Things Bob loved… his family, friends, being creative, making people happy, entertaining, music and a chilled glass of Chardonnay! He will be truly missed by all who knew him.’

Floral wreaths reading ‘Bob’ and ‘Grandad’ were laid in the hearse with the coffin.

Lee Mack, who played Ball’s son in BBC comedy Not Going Out, called the late comic ‘joyful, full of fun and mischievous’, adding: ‘I’m utterly shocked and devastated to lose my mate Bobby like this.’

Ball’s family have discouraged his fans from paying their respects to the icon today amid England’s ongoing shutdown, which prevents funeral gatherings of more than 30 people.

A statement from his family said that police and council authorities will be enforcing coronavirus restrictions, with Covid wardens out to ‘make sure people adhere to the rules’.

They added: ‘The response to Bob’s funeral announcement has been overwhelming and the love and support from you all has been wonderful and a huge comfort. A heartfelt thank you from us all.’

BBC comedy controller Shane Allen previously said: ‘We are devastated to hear the sad news of Bobby Ball passing away. He was a powder keg of comedy who entertained audiences of all ages for decades.

‘He was funny to the end, having just completed his work on the forthcoming Not Going Out series and we all feel immensely privileged to have enjoyed the benefit of his talents.

‘Our thoughts are with family and friends at this sad time.’

Ball was born Robert Harper on January 28, 1944 and found fame on the The Cannon & Ball Show from 1979 to 1988 opposite his lifelong friend Cannon.

Oldham-born Ball met Cannon, real name Thomas Derbyshire, while he was working in a factory as a welder.

After the success of The Cannon & Ball Show, Ball appeared in a string of TV series including as Lenny in Last Of The Summer Wine from 2005 to 2008.

He also played Topsy Turner in Heartbeat and appeared in Mount Pleasant, Benidorm and The Cockfields.

In 2012, Ball competed in a Strictly Come Dancing Christmas special.  He also appeared in TV series including Last Of The Summer Wine, Heartbeat, Mount Pleasant, Benidorm, The Cockfields and Not Going Out. 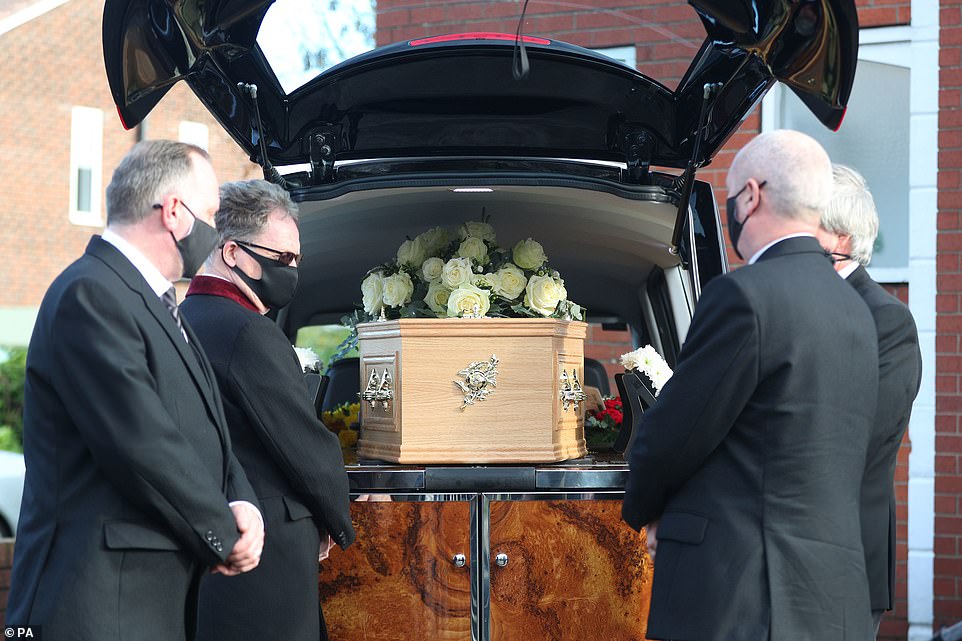 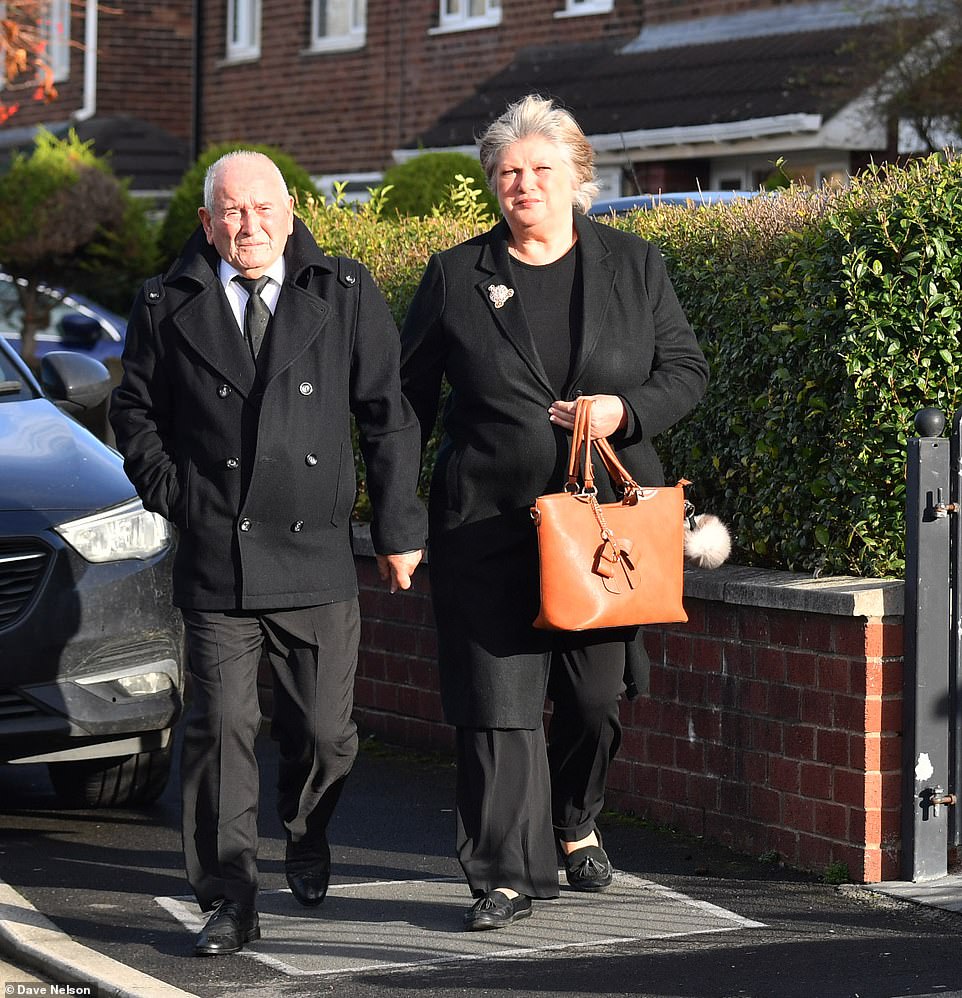 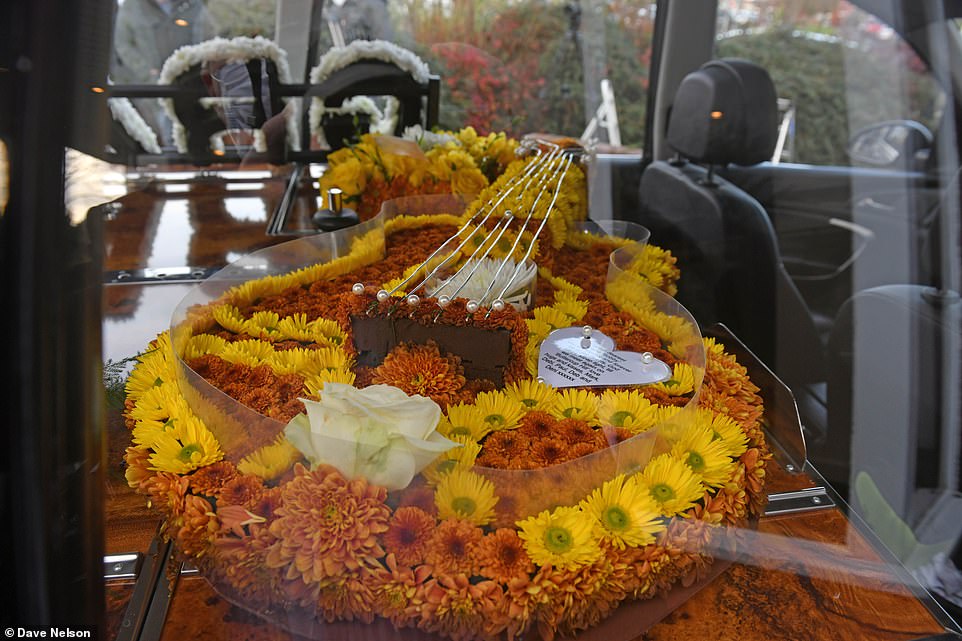 Actor and author Ball had been at Blackpool Victoria Hospital with breathing problems after his family initially thought he had a chest infection, before he tested positive with Covid-19 and later died 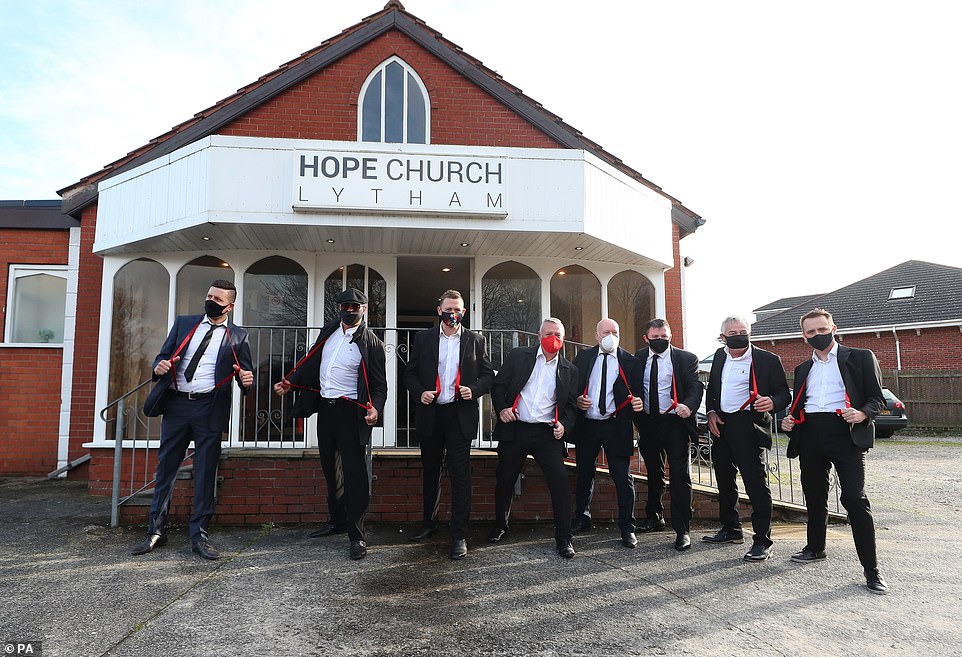 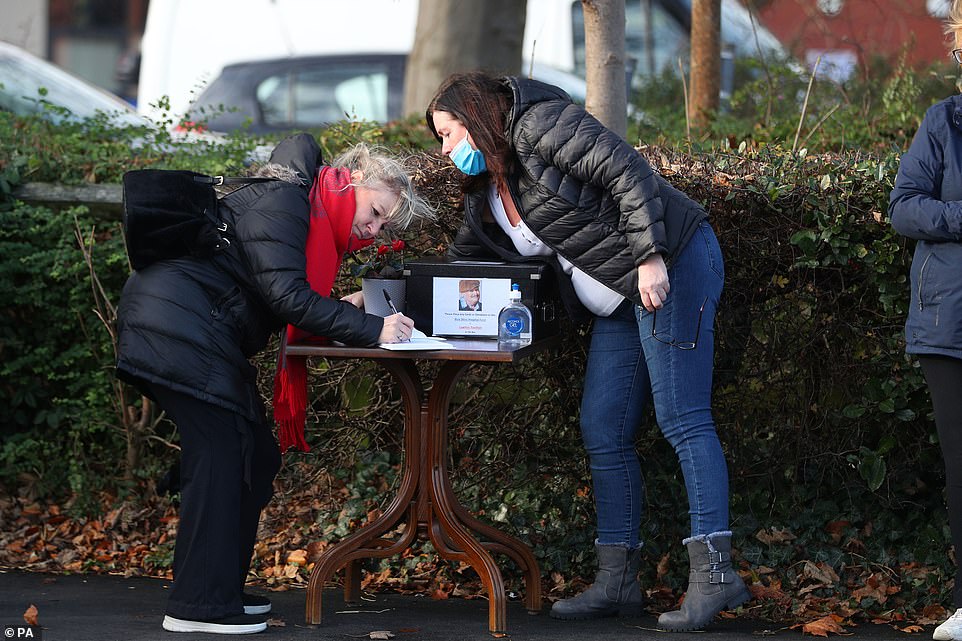 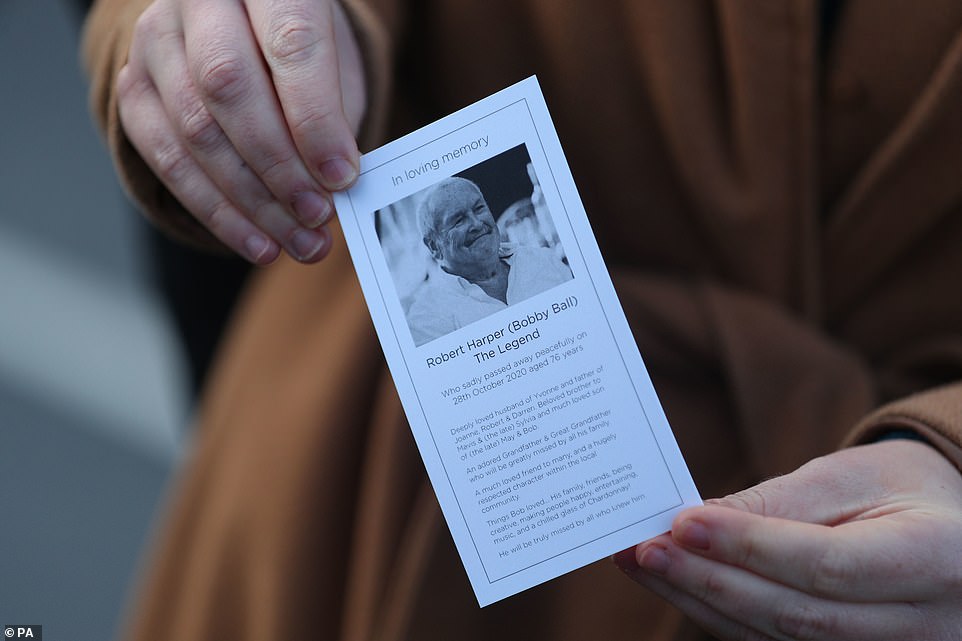 ‘A big chunk of me has gone’: Tearful Tommy Cannon breaks down as he pays moving tribute to Bobby Ball, 76, saying he is ’empty’ following his comedy partner’s death after testing positive for Covid

Bobby Ball’s comedy partner of six decades Tommy Cannon teared up as he paid tribute to his late friend whose death has ripped a ‘big chunk’ out of his life.

Cannon described feeling ’empty’ since learning that Ball had passed away in hospital.

The duo together made up comedy double act Cannon and Ball which shot to fame in the 1970s and 80s, landing their own TV show.

Choking on his words, he told ITV’s This Morning: ‘It’s a very sad time… and this moment and time, I don’t know where I am.

‘I can’t believe he’s passed away. I can’t make any sense of it yet, I really can’t. I miss him terribly, I loved him to bits.

‘We had a great career. With great memories to look back on… and I know one day I’ll meet him again. Oh rest in peace, lad.

He is survived by two sons, Robert and Darren, with his first wife Joan Lynn, as well as his daughter Joanne with Yvonne Nugent.

Ball was patron of the local NHS Blue Skies charity and the couple recently organised a variety event which raised £30,000 towards the development of the dementia garden at Clifton Hospital in Lytham.

In March, he starred in a video posted on the Blackpool Teaching Hospitals NHS Foundation Trust’s YouTube channel singing the Cannon and Ball theme song Together We’ll Be OK.

The trust wrote that the video aimed to unite everyone in the earliest days of the pandemic, with medical staff also featuring.

At the end of the song, in a now poignant message, Ball said: ‘Now I mean that – together we’ll all be OK if we pull together. See you later!’

Ball’s manager Phil Dale said: ‘It is with great personal sadness that on behalf of Yvonne Ball, and the family, and Tommy Cannon, I announce that Bobby Ball passed away at Blackpool Victoria Hospital on October 28, 2020 (at) approximately 9.30pm.

‘Bobby had been taken to the hospital for tests as he started with breathing problems. At first it was thought to be a chest infection but a test proved positive for Covid-19.

‘His wife Yvonne said the hospital and staff could not have been more wonderful, as they were outstanding in their care of duty and they did everything possible for him and she cannot praise them enough.

‘Yvonne added that their need for privacy at this time has to be a priority. No further announcements or statements will be made.’

Mr Dale added: ‘Bobby was a true comedy star who loved entertaining people and he loved life itself. I spoke to him every day and it would always end in laughter.’ 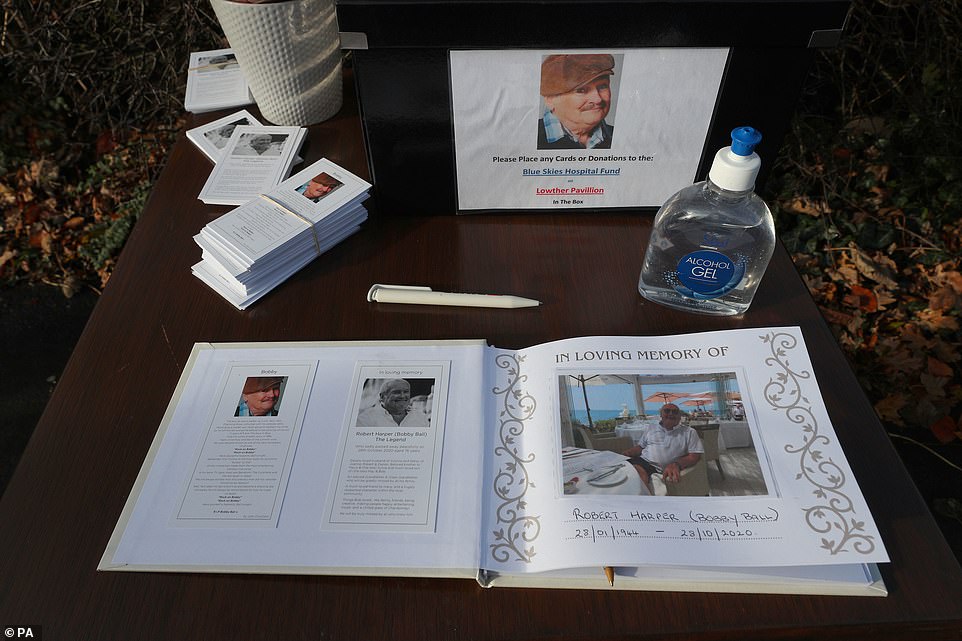 A book of condolence for comedian Ball outside Hope Church in Lytham Saint Annes, Lancashire, ahead of Ball’s funeral 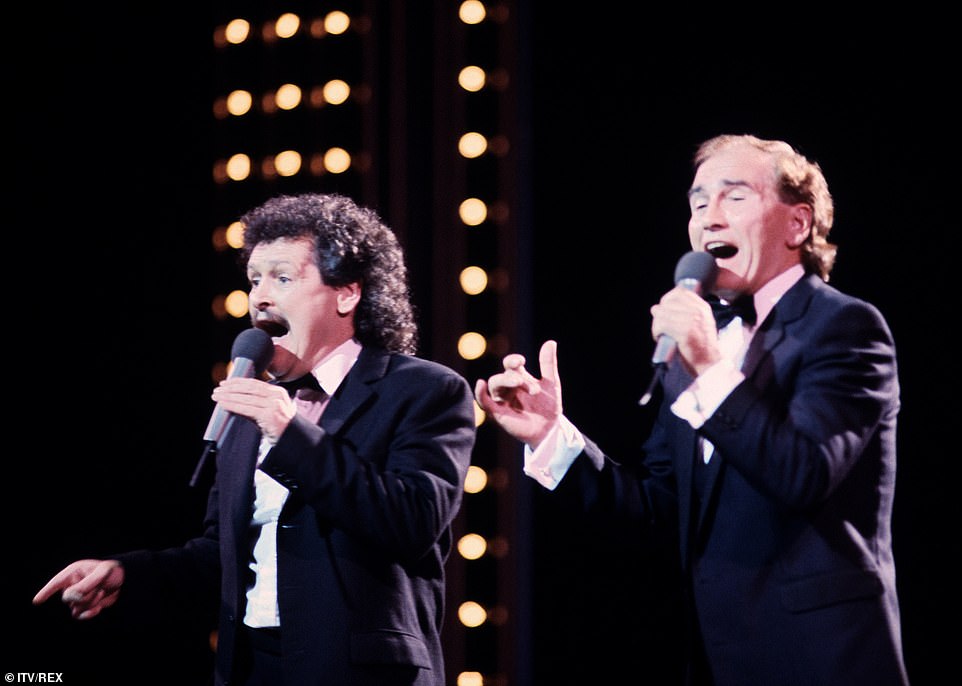 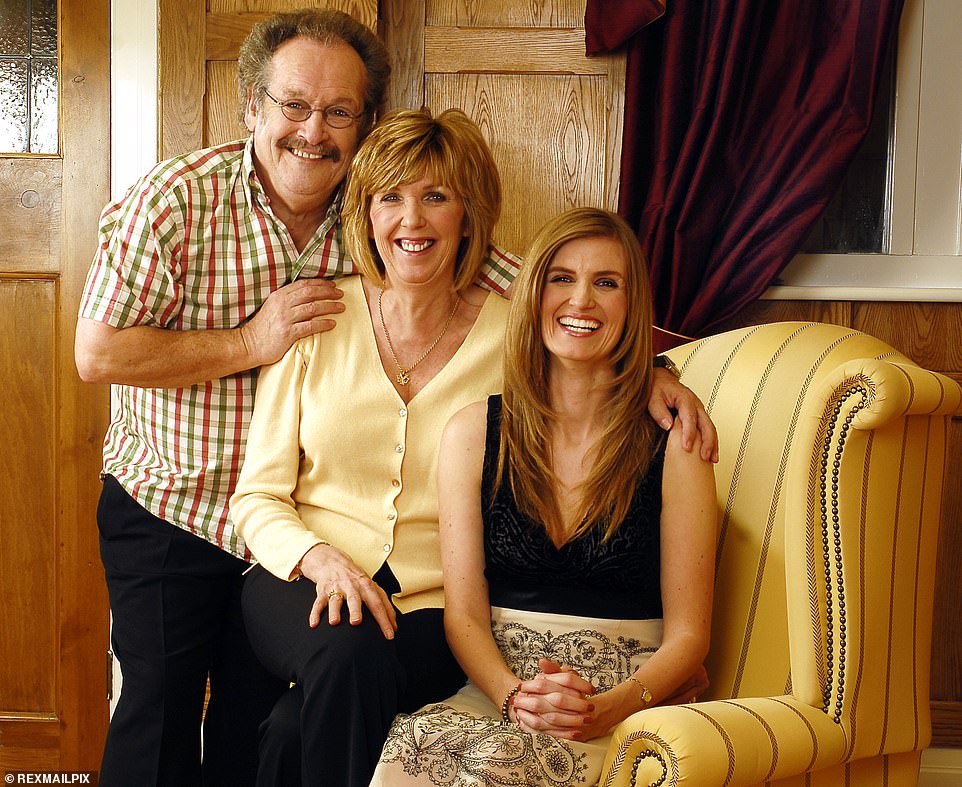 Ball, wife Yvonne and their daughter Joanne are pictured for the Daily Mail in January 2007