Tomorrow is predicted to be the busiest day for flying in 2019 with more than 17MILLION passengers set to take to the skies on 115,500 flights

Tomorrow is predicted to be the busiest single day of 2019 for flying around the world.

More than 17 million passengers are set to take to the skies on over 115,500 flights on Friday (August 9) within a single 24-hour period.

The mammoth global forecast comes as air passenger traffic continues to grow year on year, with 2019 set to be one of the busiest years for air travel on record.

Tomorrow (August 9) is set to be the busiest day for flying globally in 2019, according to travel data analysts

The prediction comes from Cirium, a travel data and analytics firm, which analyses more than 70 million passenger journeys annually to provide insights for the travel industry.

It says that by the end of August, the worldwide departures for July and August will total almost seven million, with approximately a billion travellers having packed their bags for leisure and business trips.

The busiest airlines around the world during these two summer months are predicted to be the big US carriers American Airlines, Delta Air Lines, Southwest Airlines and United Airlines as well as Irish no-frills airline Ryanair, carrying approximately 192 million passengers between them.

Meanwhile, the busiest airports are set to be Beijing, Atlanta, Dubai, Los Angeles and Tokyo-Haneda, with more than 51 million travellers predicted to transit through these five alone.

Cirium has also forecast that August 23 is set to be the busiest day of the year for flights from the UK.

Nearly half a million UK travellers will jet off on the Friday before the late August bank holiday weekend, with a total of just over 2,600 flights scheduled to depart that day alone.

EasyJet is set to fly up to 105,000 customers on 614 flights from the UK on domestic and European routes. 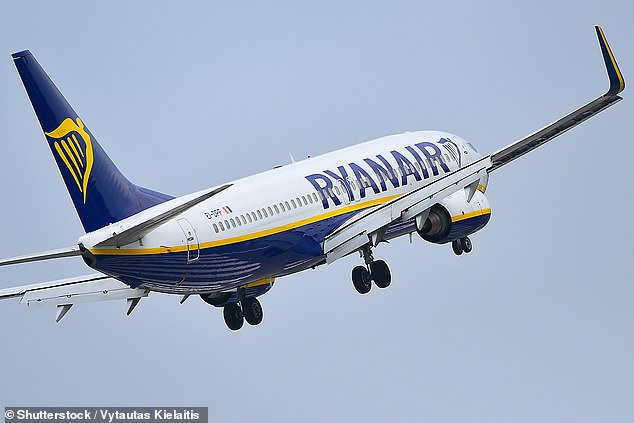 Among the airlines that are set to be the busiest in July and August are American Airlines, Delta, United and Ryanair, pictured

Meanwhile, British Airways is expected to carry up to 102,000 customers the same day on 583 long and short-haul flights, with up to 352 flights departing from its Heathrow hub.

Passenger numbers are based on the maximum capacity of available scheduled aircraft, with passenger loads normally at their highest levels during peak travel seasons, such as the summer months.

This data is used by a wide range of customers, such as airlines and airports, to improve the travel experience through smart devices and metasearch engines, like Google, Amazon and Expedia, to provide information directly to passengers.

Jeremy Bowen, chief executive officer at Cirium, said: ‘Our data shows that the July to August season for global travellers is set to be busier than ever in 2019, with an estimated 17 million passengers flying on August 9 alone, making it the busiest day worldwide for flying this year.

‘Airlines are increasingly looking to insights from data to effectively plan ahead. At Cirium, our data experts keep a close eye on passenger schedules and market trends, meaning we’re perfectly positioned to help our airline customers anticipate potential disruption and unlock consumer insights that improve the traveller experience.’