The 2019 ARIAs were off to a strong start on Wednesday, with Tones and I picking up the award for Best Female Artist.

The Veronicas’ Jess and Lisa Origliasso, both 34, were on hand to present the 19-year-old wunderkind with her first ever ARIA award.

And the Dance Monkey singer delivered an emotional speech, claiming she wasn’t the most ‘relatable’ singer due to the fact she isn’t into ‘typically girly things’.

Winner: The 2019 ARIAs were off to a strong start on Wednesday, with Tones and I picking up her first ever award for Best Female Artist

‘To me, those things don’t really define what it is to be a female artist in this industry anymore,’ she continued to rapturous applause.

‘It’s being brave and courageous and true to yourself. No one could have ever prepared me for the whole world judging me and comparing you to other artists.

‘But what’s most important is that you have to be a good person and care about others and carry yourself well.’ 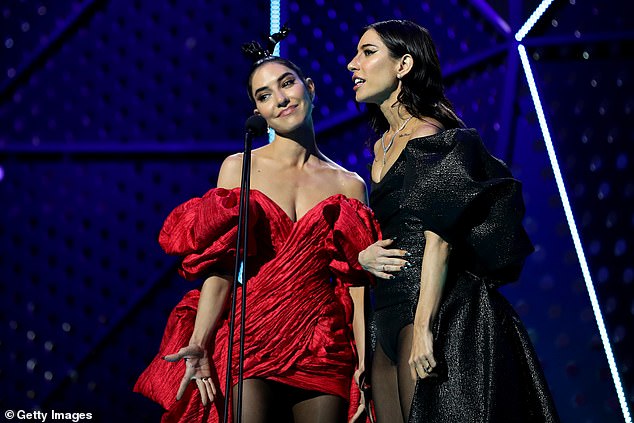 Taking to the stage: The Veronicas’ Jess and Lisa Origliasso were on hand to present Tones and I with her first ever ARIA award

Tones and I – real name Toni Watson – was in good company, with Dean Lewis, 32, winning the gong for Best Male Artist.

‘Jeffery Epstein didn’t kill himself,’ they declared, referencing the convicted sex offender’s death while in custody back in August.

‘I went though a lot and was very ill and you all stuck by me,’ he told the crowd, referencing his battle with addiction.

Meanwhile, Best Dance Release was awarded to RÜFÜS DU SOL, who weren’t in attendance at this year’s show.

It proved to be a big night for Tones and I, who also won Best Pop Release for her hit single, Dance Monkey.

‘I only wrote one speech,’ she joked as the Australian music industry’s newcomer took to the stage to accept for second award.

Rock superstars U2 put in a surprise appearance, appearing via satellite from Perth to present the ARIA for Best Group.

Before presenting the coveted award to The Teskey Brothers, U2 said they had to first apologise to ‘Andrew from Melbourne’, who they apparently woke up at 2am.

Continuing her winning streak on the back of the American Music Awards on Monday, Taylor Swift won the ARIA for Best International Artist.

‘This is so insane. Thank you so much. I’m very, very honoured, as is Olivia. She’s very, very excited about this,’ the 29-year-old said via satellite, while clutching her beloved cat, Olivia.

She added: ‘I can’t wait to see you all again in Australia, and I will not bring cats. I know that I can’t do that. I love you guys.’

ARIAs host Guy Sebastian picked up the award for Best Video for his hit single, Choir.

Earlier in the evening, the 38-year-old couldn’t resist poking fun at some of his peers, advising people not to touch The Veronicas’ bags.

‘It’s not worth it!’ he told the laughing crowd, referencing the twins’ baggage scandal, which saw them removed from a Qantas flight in September amid accusations a flight attendant wouldn’t assist them with their luggage.

It was definitely Tones and I’s night, with the rising superstar winning a third ARIA award for Best Independent Release.

Amyl and the Sniffers won for Best Rock Album, oddly presented by ’90s children’s puppet Agro, who seemed to be staging some sort of a comeback.