TikTok is awash with videos advocating fads that claim to boost health.

Drinking water packed with chia seeds, consuming dry protein powder and putting garlic up your nose are the topics of just some videos.

The tricks claim to help with weight loss, boost the effect of a work-out and ward off a cold, respectively — though experts warn they are either ineffective or unsafe.

The practice, which involves using a device to remove debris from the tongue, can banish bad breath, as well as ward-off gum inflammation and cavities, according to Dr Sundeep Patel.

The cosmetic dentist, based at Waldron Dental Clinic in south east London, said this is down to the technique removing the white film on the tongue — which is a build-up of bacteria, debris and dead cells — which is more effective than brushing and flossing alone.

Gwyneth Paltrow, founder of wellness brand goop and known for advocating ‘dangerous’ habits, such as vaginal teaming, even does it. 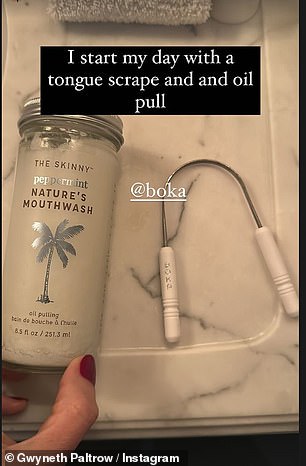 How do you scrape your tongue?

1. Stick out your tongue.

2. You should start the scraper at the back of the tongue.

4. Be sure to use light pressure

5. Rinse the scraper under warm water between scrapes.

6. Swish your mouth out with water afterwards or use mouthwash if you wish.

The practice involves scraping the tongue from back to front three or four times using light pressure, after brushing and flossing.

Advocates say the scraper — a U-shaped device made from plastic, copper or steel and costs as little as £3 and can be bought in most pharmacies — rids the mouth of harmful bacteria.

Gwyneth Paltrow this month revealed that she starts her day ‘with a tongue scrape’ using an $8 (£6.75) device from dental company Boka.

A host of bugs — more than 200 different types — live on the tongue.

While most of these are good bacteria, there are others that can lead to gum disease and cavities if they are left to build up.

Dr Patel told MailOnline: ‘Tongue scraping is a fairly novel oral trend that is likely to become hugely popular in 2023.

‘The act of tongue scraping has often been limited to the wellness industry, but it is now making its way into the mainstream and becoming a routine step within your oral hygiene routine.’

While not as important as teeth brushing and flossing, it can be added to a routine to keep the mouth as clean as possible, Dr Patel said.

Some use their toothbrush or mouthwash in a bid to clean their tongue — but a tongue scraper may be more thorough.

Dr Patel said: ‘Often after we eat or drink our tongue can feel fuzzy or like it needs a clean.

‘So morning and night scraping your tongue can help to remove bacteria from that area to prevent any dental issues down the line.’ 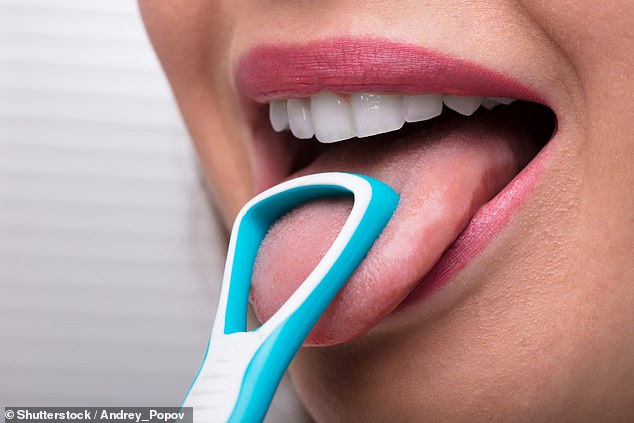 Tongue scraping, which involves using a device to remove debris from the tongue, can banish bad breath, as well as ward-off gum inflammation and cavities, according to Dr Sundeep Patel. Pictured: woman cleaning tongue with scraper

He added: ‘Tongue scrapers are pretty effective in removing bacteria from the tongue, and in some cases a dentist would suggest purchasing a scraper and including it in your oral hygiene routine.’

The practice can reduce bad breath — which is often down to food particles and bacteria sitting on the tongue.

‘Removing these will help to keep your mouth clean,’ Dr Patel said.

It can also reduce the risk of gum disease by removing particles that can aggravate the gums and lead to inflammation — which could eventually lead to gum disease.

Getting rid of additional bacteria also makes it less likely that cavities will develop.

‘The more we can help to keep our mouth clean the less likely it is that we will suffer with tooth decay or other dental complications,’ Dr Patel said.

Studies have suggested that tongue scraping can boost how well the taste buds work after two weeks of use.

So scraping twice a day may make it easier to taste foods more easily and better distinguish salty, sweet and sour foods, he said.

‘Tongue scraping can also improve the appearance of the tongue, when often our tongue has a white coating, scraping can remove this and leave it looking clean and healthy,’ Dr Patel added.

However, a British Dental Association spokesperson told MailOnline that the practice is not routinely advised by dentists.

It isn’t a substitute for brushing twice a day with a fluoride toothpaste — including last thing before bed — daily cleaning between the teeth, limiting the intake of sugary food and drinks and seeing the dentist regularly, the spokesperson said.