Tony Bennett has Alzheimer’s and has secretly been living with the disease since 2016.

The American jazz singer, 94, announced he was diagnosed four years ago and but has carried on performing and will release a new, untitled album with Lady Gaga, recorded after his diagnosis.

On his Twitter feed, his family said: ‘life is a gift, even with Alzheimer’s’, and thanked his wife Susan Crow, 54, and his family for their continued support.

‘Life is a gift – even with Alzheimer’s. Thank you to [his wife] Susan and my family for their support, and AARP the Magazine for telling my story’, they wrote on Twitter today.

Breaking news: Tony Bennett has revealed he has been been diagnosed with Alzheimer’s Disease (pictured in 2019) 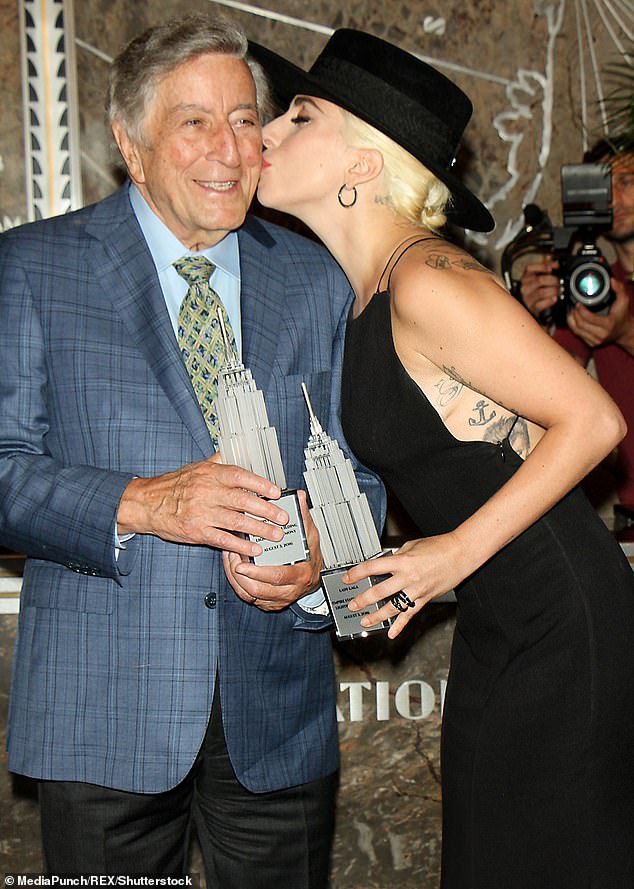 Dream duo: Gaga collaborated with Tony on the 2014 jazz album which featured old but not forgotten standard tunes such as Anything Goes (pictured in August 2016)

Statement: The iconic American singer, 94, has announced that he was diagnosed with the condition in 2016 and has been living with the disease ever since during an article with AARP magazine on Monday

The diganosis was revealed in an interview published on AARP on Monday.

Although he was diagnosed four years ago, the article reveals that Tony began show real signs of decline two years later, while he was recording the Cheek to Cheek album with Lady Gaga – a follow up to which will be released in the spring.

His third wife Susan told the publication: ‘There’s a lot about him that I miss. Because he’s not the old Tony anymore … But when he sings, he’s the old Tony.’

Tony first aired concerns over his health in 2015 when he admitted he was struggling to remember the names of his fellow musicians.

Although his wife Susan tried to assist by writing a list of names to keep on his piano, Tony insisted that he needed to see a doctor.

A neurologist at Lenox Hill Hospital in New York City confirmed the diagnosis in 2016.

Dr. Gayatri Devi, who diagnosed the star, told the magazine: ‘He is doing so many things, at 94, that many people without dementia cannot do, He really is the symbol of hope for someone with a cognitive disorder.’

He also admitted that he was ‘humbled’ by his wife’s devotion to him. 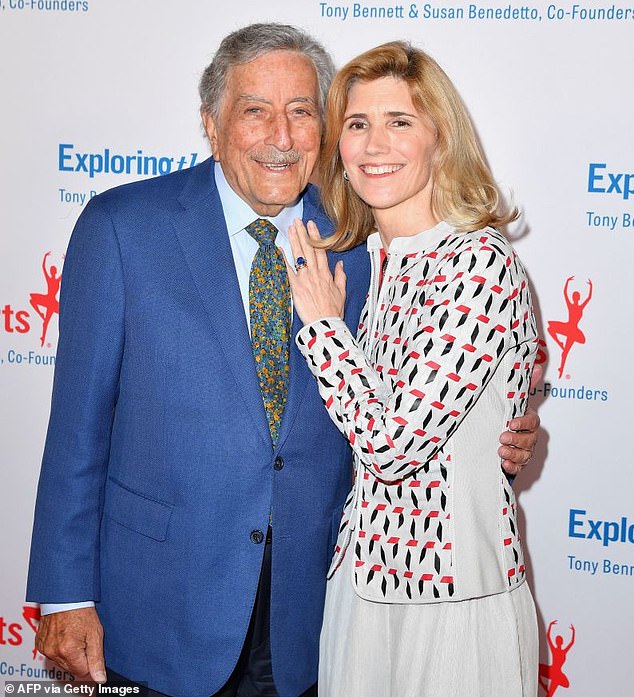 Support: Tony opened up about his condition for the first time in a Twitter post, where he said ‘life is a gift, even with Alzheimer’s’, and thanked his wife Susan and his family for their continued support (pictured with Susan in 2019)

According to his team of neurologists, Tony still has twice weekly singing sessions which they believe are stimulating his brain in a positive way.

It appears the advice has so far had a positive impact, as the report claimed Tony has so far been ‘spared’ some of the disease’s symptoms which include disorientation, episodes of rage, depression and a detachment from reality.

It also stated that Tony may never develop these symptoms.

The article did offer an insight into Tony’s condition, as it stated: ‘His expression had a mask-like impassivity that changed only slightly to dim awareness when Susan placed a hand on his shoulder.’

Tony’s condition has also reportedly been aided by his Mediterranean diet and exercise regimen, which are aided by his wife. Both have been proven to delay the progression of memory loss.

Tony and Susan began dating in the late 1980s, after his 1983 divorce from his second wife, Susan Grant.

The San Francisco-born fan, who is 40-years younger than her husband, headed up a local chapter of his fan club when she was a teenager in the 1970s.

They finally tied the knot in June, 2007, when she took the celebrity’s real last name, Benedetto.

Susan told CBS This Morning that Tony isn’t in any pain with his condition and due to this factor doesn’t believe that anything is wrong with him. 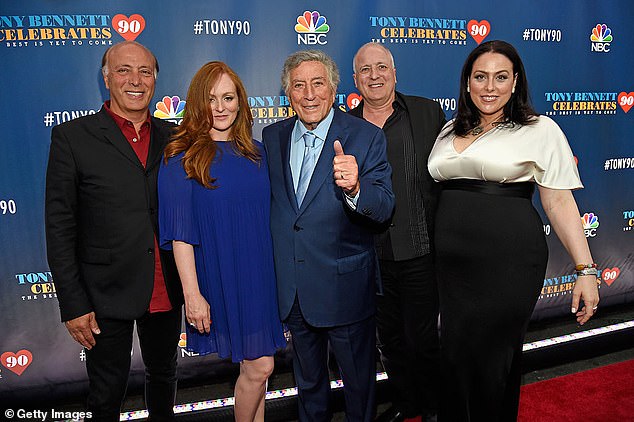 Family: Tony pictured with his four children, Danny, who acts as his manager, Antonia, Dae and Joanna (L-R) in 2016

She said: ‘You know, he works out five times a week. He sings twice a week with a pianist that comes over. He only understands if something is an ouch, you know, then there’s a problem.

‘He knows all his kids, absolutely. And he knows me. When you”re somebody”s caregiver 24/7, it goes a long way if they still know you.

He continues to live at home with his wife Susan in their New York apartment, while he is managed by his son Danny.

Tony is also father to three other children, Dae, Antonia and Joanna.

Susan admitted that she wasn’t sure whether Tony would be able to record his first album with Gaga at New York’s Electric Lady Studios.

She recalled telling Tony’s manager and son Danny that they would ‘try’.

Gaga collaborated with Tony on the 2014 jazz album which featured old but not forgotten standard tunes such as Anything Goes.

The artist previously told how collaborating with Tony ‘saved her life,’ reinvigorated her musical passion and causing her to want to ‘take a lot more time before I have kids and settle down.’

During an interview with Parade in 2014, she discussed being in a dark place following the relative low sales and media scrutiny of her album, released in November 2013.

‘Six months ago I didn’t even want to sing anymore,’ the Applause singer told the publication.

‘Tony said, ‘I’ve ­never once in my career not wanted to do this.’ It stung. Six months ago I didn’t feel that way.

‘I tell Tony every day that he saved my life. I was so sad. I couldn’t sleep. I felt dead. And then I spent a lot of time with Tony. He wanted nothing but my friendship and my voice.’

Throughout his career, Tony has been awarded 19 Grammy Awards, including a lifetime achievement award in 2001, and two Emmy Awards.

He is believed to have sold around 50 million records worldwide.

As well as his close working and personal relationship with Gaga, Tony has also performed iconic duets with the late Frank Sinatra and Amy Winehouse. 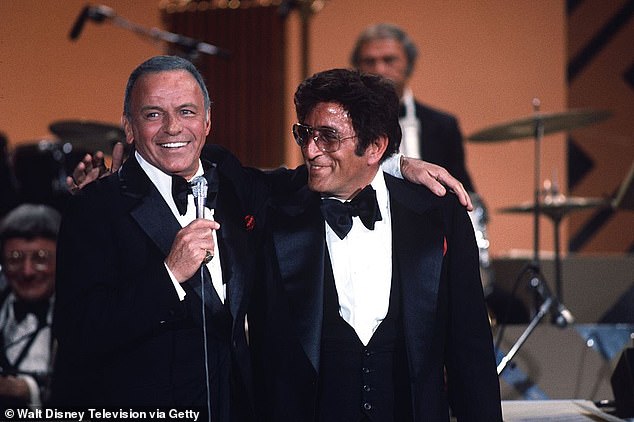 Pals: As well as his close working and personal relationship with Gaga, Tony has also performed iconic duets with the late Frank Sinatra and Amy Winehouse (pictured together in 1977)

The jazz star has also been recognised with an award for the National Endowment for the Arts Jazz Masters Award and Society of Singers Lifetime Achievement Award, and is a Kennedy Center Honoree.

The American artiste has received honorary doctorates from several institutions, such as the Berklee College of Music, The Art Institute of Boston, the George Washington University and the Juilliard School.