The Wigan MP used a media interview this morning to claim the ‘consensus that Thatcher built lasted all the way through the New Labour years’ under Mr Blair and then Gordon Brown.

Her comments are likely to spark fury among moderate Labour supporters and will be seen as an attempt by the leadership outsider to curry favour with Jeremy Corbyn-backing activists and those on the soft-left of the party.

But they also prompted Mr Blair to hit back, with a spokesman saying: ‘Any assertion that the last Labour government was a continuation of the Thatcher era is bad politics and worse history.

‘1997-2010 saw huge improvements in Britain’s public services, with millions lifted out of poverty and radical changes made to the lives of many, for the better.’

It came as Ms Nandy became the second MP through to the final round of Labour’s leadership battle today.

The straight-talking Wigan MP added the support of the Chinese for Labour group to add to backing from the GMB and NUM unions to make it onto the ballot of members in March.

She follows favourite Sir Keir Starmer through, with Corbynite candidate Rebecca Long-Bailey expected to follow – with Emily Thornberry struggling to get enough support.

Lisa Nandy, pictured at a campaign event in London this morning, said the political ‘consensus’ struck by Margaret Thatcher continued under Tony Blair 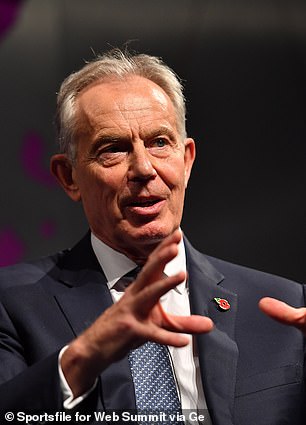 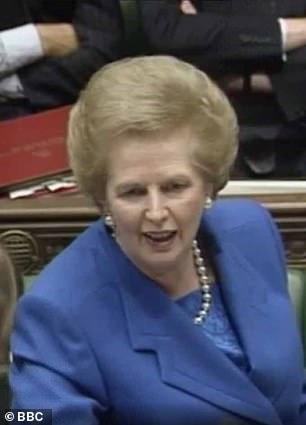 Ms Nandy said: ‘As someone of mixed heritage, I’m incredibly proud that it is Chinese for Labour who have secured my place on the ballot paper.

‘They do incredibly important work to ensure we are a representative and inclusive party that can truly speak for modern Britain.’

She had used a media interview this morning to woo left-wing party members by attacking Tony Blair’s leadership.

It came as Jess Phillips said she will now be backing Ms Nandy after she pulled out of the contest yesterday citing an inability to unite the party.

Ms Nandy used a speech in London this morning to call for changes to tax and welfare policies but her remarks about Mr Blair are likely to dominate the day.

Candidates need backing from three affiliates including unions to get through to the final ballot of members to avoid taking the harder route of picking up nominations from at least 33 Constituency Labour Parties (CLPs).

Sir Keir Starmer is already into the final stage of the contest after securing major union backing while Rebecca Long-Bailey is expected to make it through this week following the expected backing of Unite on Friday.

The remaining candidate in the race, Emily Thornberry, is facing an uphill battle after failing to secure the support of any of the major unions.

The support of GMB re-energised Ms Nandy’s campaign and means she can now look to try to overhaul the lead of the two front runners ahead of members starting to vote.

However, Ms Nandy risked angering supporters of the last Labour governments as she appeared to suggest that they had been influenced by the approach of Ms Thatcher.

Asked whether she believed Mr Blair had put ‘fiscal rectitude’ ahead of helping people, she told BBC Radio 4’s Today programme: ‘I am not going to trash the legacy of the last Labour government because actually things like the minimum wage were complete game changes in towns like Wigan and the investment that went into health and education was really, really important.

‘But it is certainly true to say that the consensus that Thatcher built lasted all the way through the New Labour years.’

She also defended Mr Corbyn’s record as leader as she said: ‘I don’t think he deserves to be trashed for a minute.’

Ms Nandy’s campaign received another lift this morning as Ms Phillips said she would be voting for the former shadow energy secretary.

Ms Phillips also said she would be putting Sir Keir down as her second preference on the ballot paper.

A spokesman for the Birmingham Yardley MP said: ‘Jess will be backing the candidates who she thinks can bring the party together and win back the trust of the electorate.

‘She will be voting for Lisa and Keir. As she has said before, Lisa will be her first preference choice.’ 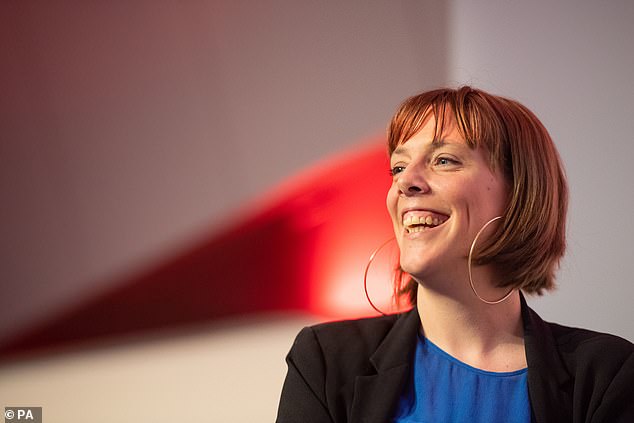 It came as Jess Phillips, who withdrew from the Labour leadership race yesterday, said she will be voting for Ms Nandy

To make it onto the final ballot the four remaining candidates must win the nominations of 33 local constituency Labour parties or three Labour affiliates, including at least two trade unions.