Tony Blair today urged Jeremy Corbyn to back a second referendum as the Labour leader faces a crunch party meeting to decide its European election manifesto.

Mr Corbyn is under huge pressure to back a confirmatory referendum on any deal and Labour’s national executive committee (NEC) will meet later to agree to vote on the issue splitting the party.

Former Prime Minister Tony Blair has weighed in and said that a second referendum would be ‘a healing process’ for Britain while the People’s Vote campaign and union chiefs are also demanding one.

He said that MPs are unwilling to make a final decision any Brexit deal because they are keen to avoid being blamed so want to ‘share responsibility with the people’.

Members say are also ready to quit and vote for a pro-remain parties if Mr Corbyn refuses to adopt the policy while Laura Parker, a director for grassroots group Momentum, has said: ‘Labour must take a side. Labour’s members already know which side they are on’.

But Jeremy Corbyn is expected to try to fudge the issue because he and his inner circle would rather have a softer Brexit. 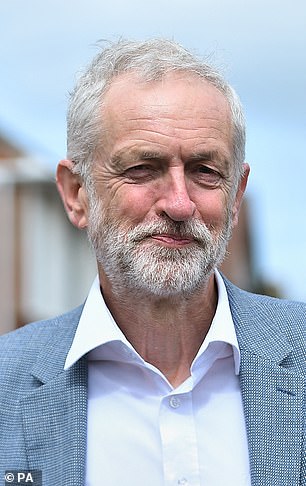 The party’s deputy leader Tom Watson went over Jeremy Corbyn’s head to urge activists to lobby for a second poll.

He appealed to campaigners to lobby members of the party’s ruling National Executive Committee (NEC) ahead of a meeting which will decide whether to make a manifesto commitment to a ‘confirmatory’ referendum in next month’s European Parliament elections.

Mr Watson published details of NEC members and told his 300,000 Twitter followers: ‘Please let your reps on the NEC know if you want them to support a confirmatory ballot on a Brexit deal.’

He was backed by Momentum chief Jon Lansman, who said: ‘Surely we can all agree a confirmatory vote.’

The idea of a second referendum is opposed by senior members of Mr Corbyn’s inner circle, who fear it would enrage party supporters who backed Brexit.

Labour’s business spokesman, Rebecca Long-Bailey, yesterday suggested the party’s call for a second referendum would not apply if it did a deal with Theresa May.

She told Sky News: ‘Our priority in these negotiations is to find the consensus and to get a deal that will protect the economy.’

Labour’s communities spokesman Andrew Gwynne also played down the need for a second poll, telling the BBC’s Andrew Marr Show: ‘I want to ensure that we avoid a bad Tory Brexit or a No Deal scenario.’

The shadow cabinet will meet tomorrow to agree a position ahead of the publication of the party’s manifesto next week. 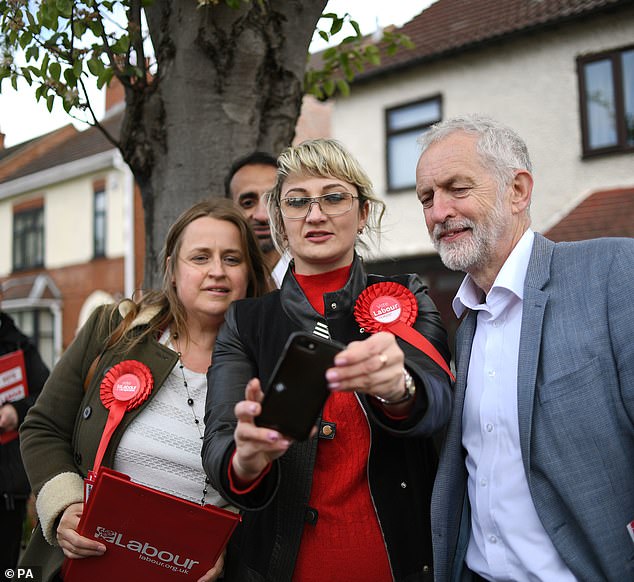 Labour leader Jeremy Corbyn poses for a selfie with Lucinda Robinson, Shaz Nawaz and Katia Yurgutene during campaigning in Peterborough  as he faces pressure to back a second referendum

Tom Watson tweeted to his 300,000 followers last night that they should press Labour to back a second referendum

It comes as cross-party talks aiming to break the impasse continue, with the de facto deputy prime minister David Lidington describing discussions on Monday as ‘positive’ and ‘productive’.

And the EU’s chief Brexit negotiator Michel Barnier said he hoped to see results this week from the talks, and reiterated a call to ‘fix Brexit quickly’.

Meanwhile Change UK – the Independent Group – will hold the first of its ‘People’s Vote Remain’ rallies in London calling for a second referendum.

Ahead of the NEC meeting, Labour MPs Peter Kyle and Phil Wilson wrote to Mr Corbyn and all NEC members urging them to ensure that a confirmatory ballot is in the manifesto.

Mr Wilson said that a referendum was backed by the majority of Labour MPs, MEPs, members and supporters and had featured in the policy approved by conference last autumn.

Labour MPs had twice been whipped in the Commons to support a motion tabled by the pair to require any Brexit deal to be subject to a public vote, he said.

‘Three years on, we know more about what Brexit means and people should be allowed to compare what the deal is with what they were promised and decide whether they want to go ahead,’ said Mr Wilson.

‘If we don’t do it, the coming years will be divisive because people will be turning round and saying ‘Hang on, I didn’t vote for this’.’

Meanwhile, some of Labour’s biggest union backers are also throwing their weight behind a referendum pledge.

TSSA general secretary Manuel Cortes said: ‘Frankly it’s time for our party to act on the overwhelming wishes of its members and voters by pledging to support a confirmatory public vote on any Brexit deal.

‘We will be pushing hard for this to be included in Labour’s European manifesto.’

But Tory sources warned talks may fall apart today if Labour activists force Mr Corbyn to agree to a second referendum in all circumstances.

Labour’s National Executive Committee is meeting today to agree a manifesto for the European Parliament elections.

The Labour leader is under intense pressure from Remainers in his party to include a commitment to a ‘confirmatory’ referendum on any Brexit deal.

A senior Tory source said: ‘If they commit to a confirmatory referendum on anything they agree with us, then it is going to be very difficult to continue.’ 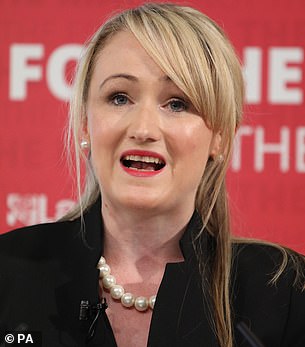 Labour’s business spokesman, Rebecca Long-Bailey, yesterday suggested the party’s call for a second referendum would not apply if it did a deal with Theresa May