The festive displays are up and the Christmas ads are already dominating TV screens – meaning it’s impossible to ignore the countdown to Christmas.

It’s the most expensive time of year for most families but if you are clever about how you spend it’s possible earn yourself a little something extra – or even a free flight – to beat the January blues.

Here are the top credit cards to spend on this year, and the ones you still have time to get before Black Friday madness hits – plus the ones to avoid at all costs.

Before we get stuck in to our list of the top deals, our usual health warning applies.

You MUST be disciplined about repaying if you are considering any of these cards, even the ones with seemingly long 0 per cent interest deals.

Credit cards companies only offer these rewards schemes and promotions to get you to spend more, in the hope they can earn more cash on you debt when they slap you with interest of 18 or 19 per cent.

Of course, if you are trying to clear a balance before the 0 per cent promotion ends, extra spending will make it harder.

Here are our three golden rules:

The American Express Platinum Cashback Credit comes with a £25 annual fee, but it pays 5 per cent cashback on spending in the first three months (capped at £125).

While there is no interest-free period on purchases, and an APR of 28.2 per cent, with Christmas presents to buy and higher food and drink spends at this time of year it could be a good time to take advantage of the introductory cashback rate.

There is an option without an annual fee – the American Express Platinum Everyday credit card that pays 5 per cent for three months (capped at £100). After that, you earn tiered cashback. You get 0.5 per cent on up to £5,000 and then 1 per cent on further spending. 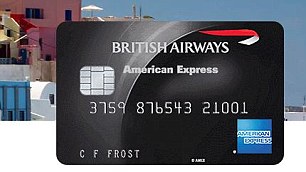 This card takes up to 10 days to arrive

If you spend £3,000 on a American Express British Airways Premium Plus credit card within three months you can currently bag yourself 25,000 Avios points. That could get you two return tickets to Milan, Munich or Nice.

The card costs £195 per year, but if you regularly use your credit card for work expenses and for all of your everyday spending it could be worth stumping up the cash.

Alternatively, there is a free version – the American Express British Airways credit card that gives you just a 5,000 Avios bonus for spending £1,000 in the first year.

However, this card also comes without an interest-free purchase period and has an APR of 22.9 per cent.

This is Money recently revealed the little-known Barclaycard Hilton Rewards card offers a free night’s stay at any Hilton hotel once you spend £750 within the first three months.

The card is free and it pays 2 points for every £1 you spend (you get an extra point for spends with Hilton Worldwide). You also get a bonus of 2,500 points for the first four stays with the hotel group within the first year.

The card automatically gets you Silver Elite Status. This includes perks such as free health club access and early check ins. After you spend £10,000 on the card, you make it to Gold Elite Status, which gets you complimentary breakfasts and free room upgrades.

Interest is charged at 18.9 per cent APR.

What about spreading the cost?

As a general rule, it’s better to spread the cost of Christmas by building up a cash pot during the year, but in reality this isn’t always they way it goes.

If you are planning on putting some of the cost of Christmas on credit and clear the debt bit by bit then you want to avoid using a store card or a standard credit card that charges interest at 18 or 19 per cent.

A purchase credit card won’t charge you interest on your balance for a set period, typically two years or more. This means all of your repayments go towards paying down your debt rather than clearing interest, making it quicker and cheaper to clear.

Sainsbury’s Bank – Up to two weeks from application

The Sainsbury’s Bank Nectar Purchase credit card comes top of the tables for its 31-month 0 per cent interest deal on spending. Plus it pays Nectar reward points when you swipe your card. 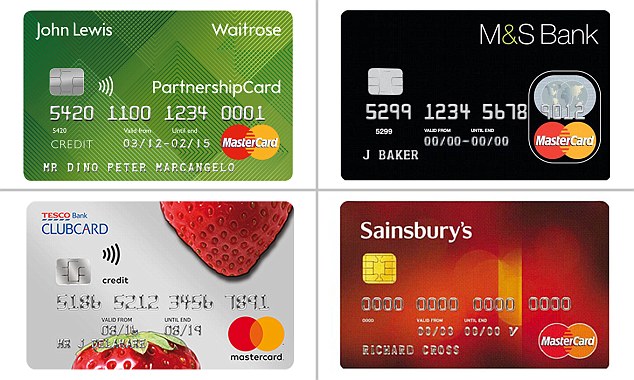 You get 2 Nectar points for every £1 you spend on Sainsbury’s shopping and fuel and one point per £5 spent elsewhere. You can exchange 500 points for £2.50 to spend in store.

The standard interest rate is 18.9 per cent.

The Tesco Bank Clubcard Credit card for purchases comes with a slightly shorter 0 per cent purchase deal at 30 months but its Clubcard reward scheme is one of the most generous.

It gives one Clubcard point for every £4 you spend on it in Tesco stores or on Tesco Fuel and one point for ever £8 spent elsewhere. This is in addition to the 1 point per £1 you already earn using its loyalty scheme.

One point is worth 1p if spent in-store at Tesco and 4p if redeemed using Tesco’s Clubcard rewards vouchers. You can swap points for Avios and money off Uber trips.

M&S has a couple of offers worth considering. Its Shopping Plus credit card has a 25-month 0 per cent purchase deal that also pays reward points for spending.

You get one point for every £1 in shops and one point per £5 elsewhere. Each point is worth 1p and after your first spend on food or clothing you get a bonus 500 points.

As a welcome bonus, we’ll also send you a 500 M&S points voucher, worth £5, to use when you spend on food, clothing or home at M&S with your new credit card.

It has also launched a more generous rewards offer on its Reward Plus credit card.

The comes with a £20 voucher on your first spend and doubles up your points on spending for the first year.

This means you get two points per £1 spent in stores. It comes with a shorter 0 per cent promotion at six months however.

Both charge interest of 18.9 per cent once their respective 0 per cent promotions end.

John Lewis/ Waitrose – apply in store to get the card the same day, otherwise up to five working days

The Partnership Reward card lets you earn points to spend in John Lewis department stores and in Waitrose.

It has no interest-free term attached though so it won’t be the right card for spreading the cost as interest is charged at 18.9 per cent.

Store cards can be tempting with many promising discounts and freebies when you sign up.

But typically these come with hefty interest starting at around 25 per cent. If you don’t have a decent credit rating you may even be charged more.

Here are a few examples:

Watch out for Catalogue companies too.

These offer shoppers the ability to spread the cost of items such as clothes, household appliances and furniture over a period of time – usually measured in weeks – by offering them credit.

The interest often reaches 40 per cent, all for the privilege of not having to pay upfront.

And prices can be higher in the catalogues than can be found elsewhere.