Two top Democrats launched an investigation Saturday into a claim that Secretary of State Mike Pompeo called for the dismissal of a State Department Inspector General who had opened a probe into his conduct.

Rep. Eliot L. Engel and Sen. Robert Menendez have told the Trump administration to preserve all records related to the Friday-night dismissal of Steve Linick in an open letter announcing the investigation.

‘Reports indicated that Secretary Pompeo personally made the recommendation to fire Mr. Linick, and it is our understanding that he did so because the Inspector General had opened an investigation into the wrongdoing by Secretary Pompeo himself,’ the letter said.

‘Such an action, transparently designed to protect Secretary Pompeo from personal accountability, would undermine the foundation of our democratic institutions and may be an illegal act of retaliation.’

President Donald Trump fired Linick, an Obama administration appointee, late on Friday night but gave no reason for his ouster.

Rep. Eliot L. Engel and Sen. Robert Menendez say President Trump may have engaged in an ‘illegal act of retaliation’ when he fired State Department Inspector General Steve Linick. They claim that the IG was fired at the recommendation of Secretary of State Mike Pompeo, after a probe was launched by the state department about Pompeo’s own conduct 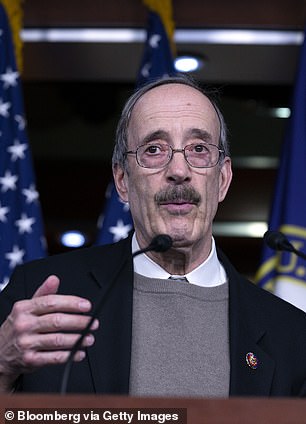 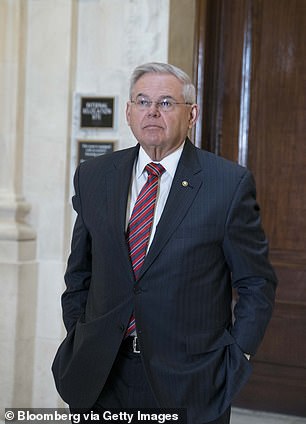 Rep. Eliot L. Engel (left) and Sen. Robert Menendez (right) told the administration Saturday that they were launching an investigation into the firing of the state department inspector general

In a letter to Congress, Trump said Linick, who had held the job since 2013, no longer had his full confidence and that his removal would take effect in 30 days. Trump did not mention Linick by name in his letter.

It is the latest in a series of moves against independent executive branch watchdogs who have found fault with the Trump administration.

The move was met with immediate backlash as Democrats in Congress cried foul,.

Engel, the chairman of the House Foreign Affairs Committee, was the first to suggest that Linick was fired in part in retaliation for opening an unspecified investigation into Secretary of State Mike Pompeo.

‘This firing is the outrageous act of a president trying to protect one of his most loyal supporters, the secretary of state, from accountability,’ Engel said in a statement.

‘I have learned that the Office of the Inspector General had opened an investigation into Secretary Pompeo. Mr. Linick’s firing amid such a probe strongly suggests that this is an unlawful act of retaliation.’

Engel offered no details of the investigation, although two congressional aides said it involved allegations that Pompeo may have improperly treated staff.

According to a Democratic aide, Linick’s office was looking into Pompeo’s ‘misuse of a political appointee’ at the State Department to perform personal tasks for himself and his wife, New York Times reporter Edward Wong said.

The New York Congressman announced his investigation into the firing with Menendez, a ranking member of the Senate Committee on Foreign Relations, calling on administration officials to preserve all records related to the firing and to turn information over to the committees by Friday, May 22.

‘President Trump’s unprecedented removal of Inspector General Linick is only his latest sacking of an inspector general, our government’s key independent watchdogs, from a federal agency,’ the pair wrote.

‘We unalterably oppose the politically-motivated firing of inspector generals and the President’s gutting of these critical positions.’ 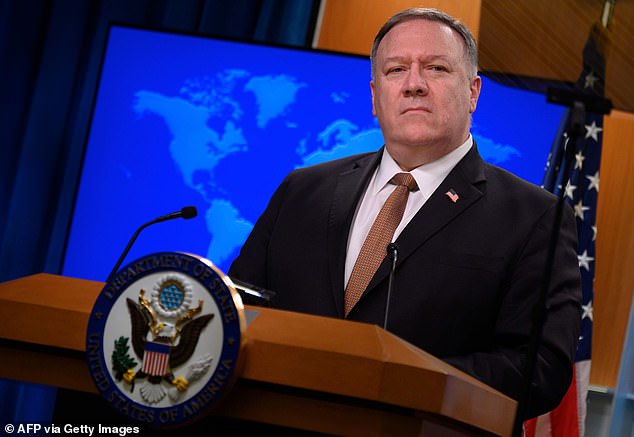 The Democrats launched an investigation Saturday claim that Secretary of State Mike Pompeo called for the dismissal of State Department Inspector General Steve Linick who had opened a probe into his conduct. They say it was a move by Trump to protect Pompeo, pictured 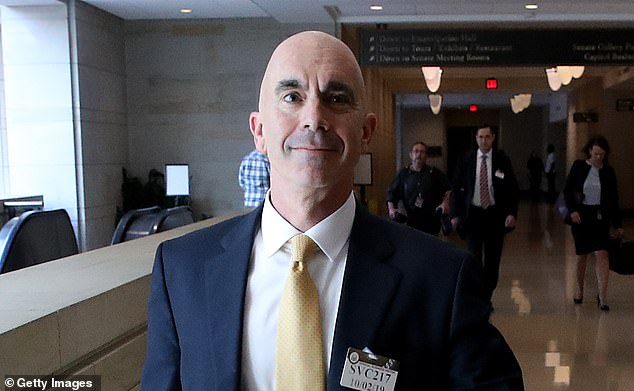 State Department Inspector General Steve Linick was dismissed late on Friday night. In a letter to Congress, Trump gave no reason for the dismissal but said he had lost confidence in the IG

‘At this point, the President’s paralyzing fear of any oversight is undeniable.’

Linick’s office has issued several reports critical of the department´s handling of personnel matters during the Trump administration, including accusing some political appointees of retaliating against career officials.

‘If Inspector General Linick was fired because he was conducting an investigation of conduct by Secretary Pompeo, the Senate cannot let this stand,’ said Democratic Senator Chris Murphy.

‘The Senate Foreign Relations Committee must get to bottom of what happened here.’ 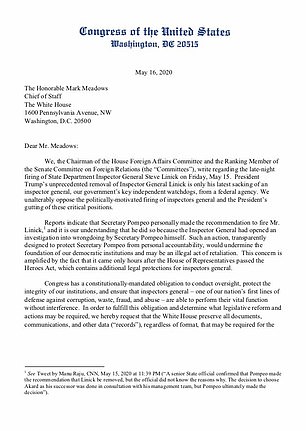 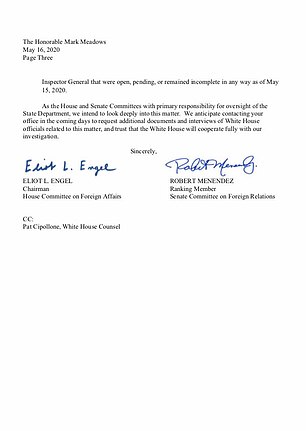 Rep. Eliot L. Engel and Sen. Robert Menendez published the letter above Saturday in which they said that Linick’s firing ‘would undermine the foundation of our democratic institutions and may be an illegal act of retaliation’ if it was found to be a move to protect Pompeo

House Speaker Nancy Pelosi also condemned Linick’s ouster, saying he had been ‘punished for honorably performing his duty to protect the Constitution and our national security.’

‘The president must cease his pattern of reprisal and retaliation against the public servants who are working to keep Americans safe, particularly during this time of global emergency,’ she added.

Under Linick, the State Department’s inspector general office was also critical of former Secretary of State Rex Tillerson’s hiring freeze and attempts to streamline the agency by slashing its funding and personnel.

Rep. Engel announced the launch pf the investigation on Twitter

Linick, whose office took issue with former Secretary of State Hillary Clinton’s use of a private email server while she served as America’s top diplomat, played a minor role in the Ukraine impeachment investigation into Trump.

In October, Linick turned over documents to House investigators that he had received from State Department Counselor T. Ulrich Brechbuhl, a close Pompeo associate, which contained information from debunked conspiracy theories about Ukraine´s role in the 2016 election.

Linick will replaced by Stephen Akard, a former career foreign service officer who has close ties to Vice President Mike Pence, said the official, who was not authorized to discuss the matter publicly and spoke on condition of anonymity.

Akard currently runs the department’s Office of Foreign Missions. He had been nominated to be the director general of the foreign service but withdrew after objections he wasn’t experienced enough.

Trump has been taking aim lately at inspectors general. 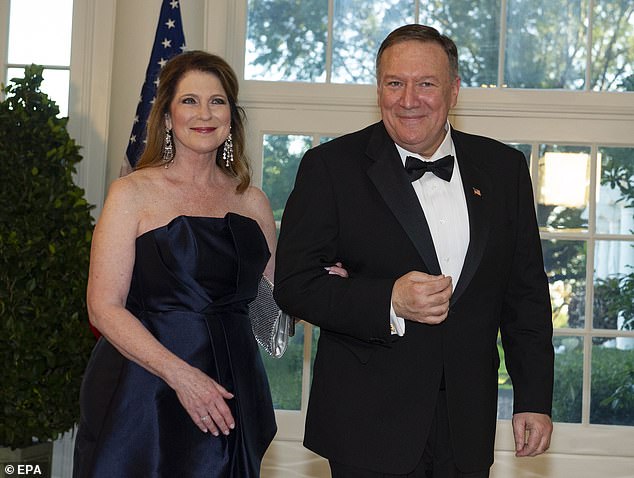 Secretary of State Mike Pompeo and wife Susan Pompeo are seen at a state dinner in September. Linick was reportedly investigating whether they used an appointee to run errands 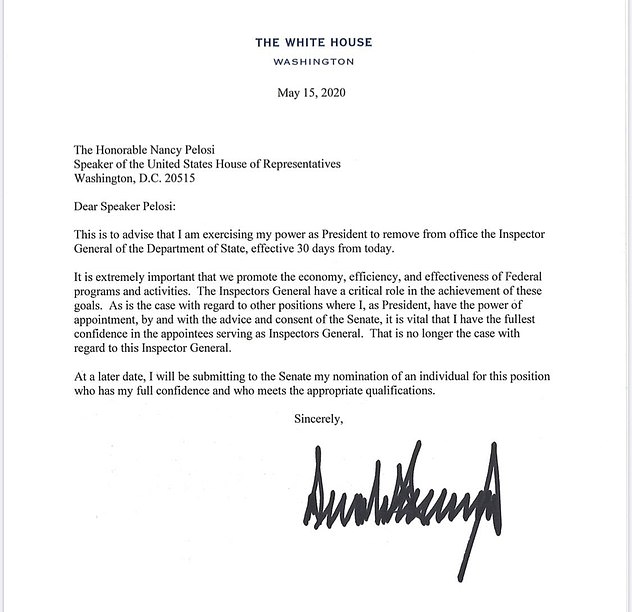 Trump submitted this notice to Congress as required by law, and technically Linick’s removal will not come into effect for 30 days. Democrats are now investigating the dismissal

In April, he fired Michael Atkinson, the inspector general for the intelligence community, for his role in the whistleblower complaint that led to Trump´s impeachment.

Then Trump removed Glenn Fine as acting inspector general at the Defense Department. The move stripped him of his post as chairman of the Pandemic Response Accountability Committee, which is among those overseeing the vast economic relief law pass in response to the coronavirus.

During a White House briefing on COVID-19, Trump questioned the independence of an inspector general of the Department of Health and Human Services over a report that said there was a shortage of supplies and testing at hospitals.

Trump has since moved to replace the HHS official, Christi A. Grimm. She is a career person who has held the position in an acting capacity, but now Trump has nominated a permanent replacement.

By law, the administration must give Congress 30 days’ notice of its plans to formally terminate an inspector general, in theory giving lawmakers time to study and potentially protest the move.

But previous such firings have gone through unimpeded, and inspectors general previously dismissed have been replaced by political allies of the president.

Pompeo, Washington’s top diplomat, has raised eyebrows for frequently traveling the world on his government plane with his wife, who has no official role.

CNN reported last year that a whistle blower had complained that the Bureau of Diplomatic Security, which guards US missions overseas as well as the secretary of state, had been assigned questionable tasks for the Pompeos, such as picking up takeout food or tending to the family dog.

The State Department confirmed Linick’s firing but did not comment on the reason or on whether Pompeo was under investigation.