Nemiah Fletchman was affectionately known as ‘Tennis-saurus’ when he was little, for two reasons. The first was that Nemiah had almost reached his adult height of 6ft 3in before he was barely out of short trousers; the other was obvious to anyone who saw him in action on the rundown tennis courts near his home in Manchester’s Moss Side.

What a serve the young man had. Timed at 120 mph, he blew opponents away. Even in this football-mad city, everyone knew Nemiah was something special.

His family received financial backing — to the tune of £100,000 — from Wayne Rooney’s agent Paul Stretford, whose Cheshire-based agency is committed to helping grassroots sport in the area.

By 16, Nemiah was ranked in the top ten in his age group in Britain. In a Sunday newspaper profile of him at the time, his coach tipped him for Wimbledon, likening his prodigy to the legendary Pete Sampras and big-hitting Argentinian star Juan Martin del Potro.

Equally important as his skills and strength on court was the example his mother, Elvereen, set off-court. She raised Nemiah and his five brothers and five sisters — yes, 11 children — singlehandedly, after her husband died during a routine heart operation some years ago.

Nemiah Fletchman was affectionately known as ‘Tennis-saurus’ when he was little, pictured at 16

Locals remember her clearing away drug addicts’ needles and syringes from Alexandra Park, where Nemiah practised, so he and his siblings and other children could play safely.

Her prodigiously talented son, who attended St Peter’s Roman Catholic High School, was ‘grounded’ and ‘totally focused on tennis’, according to those who knew the family.

So you could — perhaps should — have been reading about him on the sports pages of newspapers today. But a future that promised so much ended not on the hallowed turf of SW19, but in the dock of Carlisle Crown Court last week, when Nemiah Fletchman, now aged 19, was jailed for joining a ‘county lines’ drugs gang.

He and two other 19-year-olds, arrested in March, admitted planning to flood the streets of Carlisle with heroin and crack cocaine. They will spend the next three years in a young offenders’ institution. ‘Your sporting career is in ruins and your family must be distraught,’ the judge told Fletchman, who sat with his head bowed as he was sentenced.

Few could argue with the punishment. Yet, at the same time, anyone who is familiar with the curse of county lines — the focus of an ongoing campaign by this newspaper — would also find it hard to disagree with his barrister who described in court how his young client had also ‘very much been exploited’.

Vulnerable teenagers, often in the care system, are used as ‘mules’ to transport drugs from ‘saturated’ major cities to relatively ‘untapped’ provincial towns, where there are vast profits to be made, especially from cocaine and heroin. 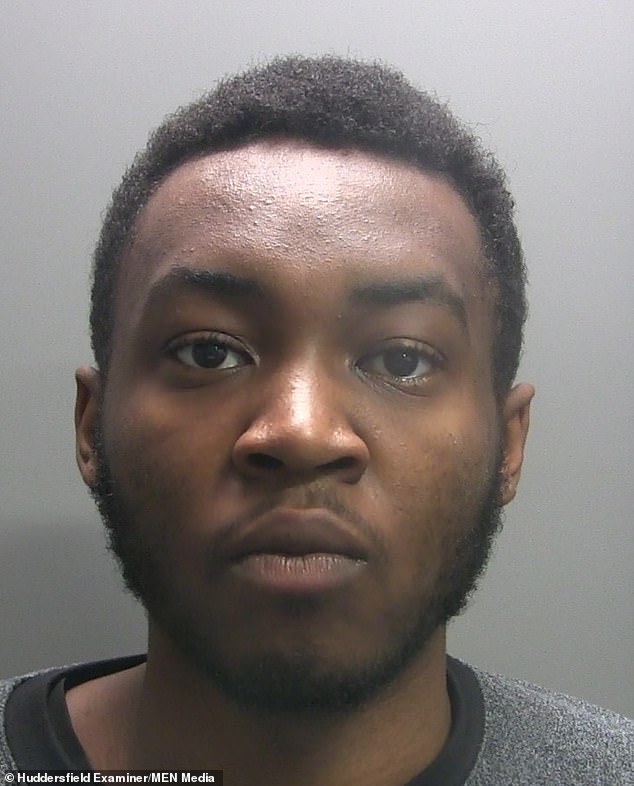 Nemiah Fletchman, 19, of south Manchester, who has been jailed for three years after pleading guilty to possession of crack cocaine and heroin with intent to supply 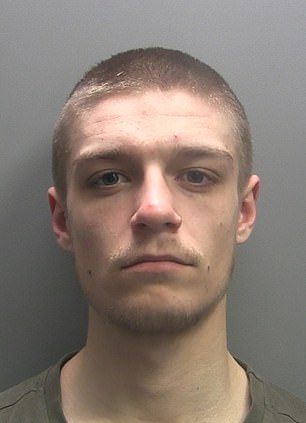 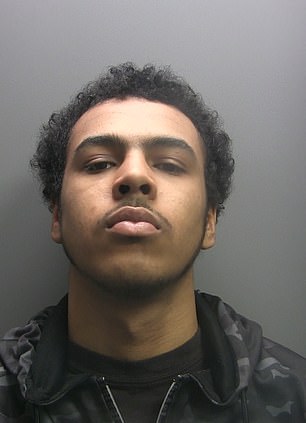 Mobile phones, the so-called county lines, are circulated in the targeted towns and drugs ordered in the same way you would ring for a pizza.

‘Foot soldiers’, such as Fletchman, are disposable in the gang hierarchy — after all, they are the ones who deal directly with ‘customers’, which means there is precious little chance of the main players ever being caught.

Nemiah Fletchman admittedly wasn’t in the care system. He was desperate, though, and had got into financial difficulty during his first year at Manchester Metropolitan University, running up debts on his credit card and struggling to pay for a car he had just bought, the court heard. County lines offered him a way out.

One person, in particular, aside from his mother, was left stunned by his imprisonment. Simon Roberts was once Nemiah’s mentor — the coach who had said he reminded him of Sampras, the seven-time Wimbledon champion.

‘Oh my God,’ were his first words when we broke the news to him. ‘I had no idea,’ continued Mr Roberts, who spoke to us from Dubai, where he now coaches tennis. ‘I haven’t seen Nemiah for a while.’

Mr Roberts, in his mid-30s, has known Nemiah since he was 15, and trained him when he turned 16 and was beginning really to fulfil his potential.

In fact, he was still playing regularly for the Holcombe Brook Sports Club in Bury, Greater Manchester, a widely respected training ground for elite youngsters, up until last summer

‘It’s a real shame,’ he said. ‘He was doing so well. He was a rising star, definitely. He moved so well around the court for a big guy. He had the serve and a really good forehand, too. He also had the right mentality.’

Mr Roberts added: ‘He always worked and trained hard to be as good as he could be. Nemiah was also a really nice, down-to-earth lad who had his head screwed on. He was the very last person you’d think would get involved in something like this.

‘He was from such a nice family. His siblings also played tennis and they enjoyed each other’s success.

‘Their mum was the driving force. She used to take them everywhere for matches. She had plans for all the kids to do well at tennis. She was such a good influence.’

Elvereen’s daughter Jhonayah represented Great Britain when she was 12, while another son, Moezze, was selected for special coaching at Manchester Regional Tennis Centre. The family’s background in Moss Side, a neighbourhood scarred by gang violence and gun crime back in the Eighties and Nineties, was even compared — in one newspaper article — with that of the Williams sisters, Venus and Serena, who were brought up in the notorious Los Angeles suburb of Compton. 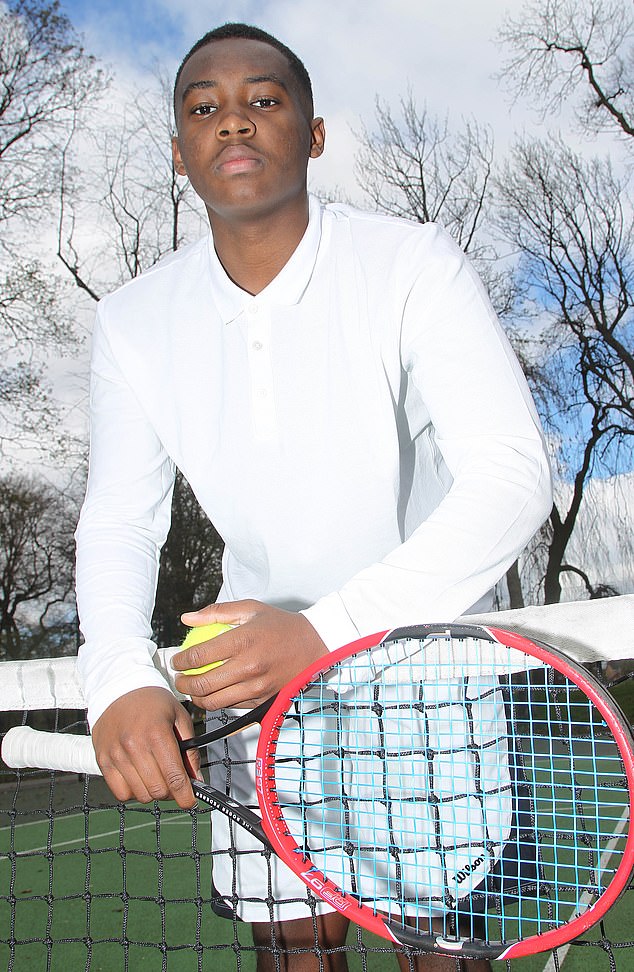 Simon Roberts was once Nemiah’s mentor — the coach who had said he reminded him of Sampras, the seven-time Wimbledon champion

Nemiah was an outstanding all-round athlete. He also excelled at basketball (he towered above everyone else) and made the county badminton team when he was ten.

But tennis was his passion. One photograph online epitomises that early promise and youthful excitement: he is pictured, beaming, standing next to a logo for the Wimbledon Championships.

In 2010, he and his younger brother were chosen to go to Wimbledon as part of the celebrations to mark the 75th anniversary of soft drinks company Robinsons’ sponsorship at the tournament, and they met Tim Henman.

Nemiah won the coveted Didsbury Men’s Open while at school and the junior Winter Regional Tour, staged by the Lawn Tennis Association.

‘I’ve always been convinced Nemiah has the potential to go all the way,’ his mother said in an interview three years ago.

He studied sports science at Stockport College before going on to university.

It was around this time, in 2017, that possible clues started appearing on his Facebook page of the dangerous circles into which he had fallen.

He began posting video and audio clips of the rap scene in Manchester, featuring drugs and guns.

Last year, eight members of 7M were jailed for the brutal murder of a college student who was hacked to death with machetes in Moss Side days after one of the videos was put on YouTube.

There is nothing whatsoever to suggest Nemiah Fletchman was linked to 7M in any way, but there is also nothing, until this point in his life, to suggest he was the kind of teenager who would have interest in their dystopian music, either.

But, 18 months ago, he suffered a head injury in a car crash, Carlisle Crown Court heard, that led to a ‘change in personality’, making him more impulsive and susceptible to peer pressure. 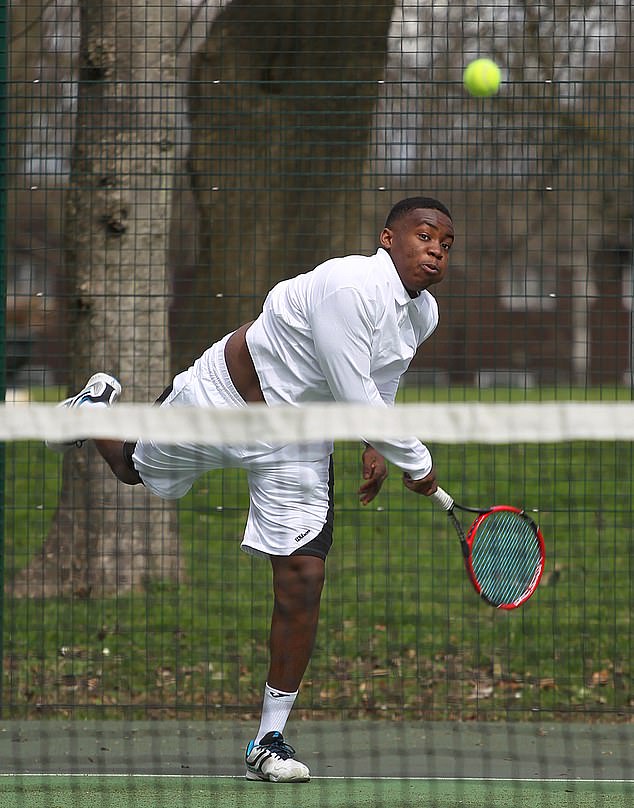 A future that promised so much ended not on the hallowed turf of SW19, but in the dock of Carlisle Crown Court last week

His lawyer said Fletchman, who continued playing after the crash, bitterly regretted being sucked into a Manchester county lines gang to pay off his debts.

Either way, they were all offered fast cash to solve their problems: it’s always the same story. The trio headed more than 100 miles north to Carlisle, where they forced a frail addict to move out of his flat — a tactic known as ‘cuckooing’ — so they could use it as a base for their drug-pushing operation.

Police investigated after being alerted to suspicious activity at the address in March.

Inside, they found nearly £9,000 worth of Class A drugs — some made up into individual deals — along with weighing scales and ‘business cards’ with the suspected county lines number on them.

Fletchman, Fatinikun (who was armed with two knives and had two mobile phones) and Higson tried to flee, but were immediately apprehended. Of Fletchman’s role in the enterprise, his barrister said: ‘He was there to collect the money and take the money back. That is because he is quite an imposing young man — 6ft 3in tall and extremely well built.’

The National Crime Agency (NCA) has identified more than 720 county lines networks running between London and Wales, London and the West Country and the North West, in such cities such as Liverpool and Manchester, and Cumbria, which gives you an idea of the scale of the phenomenon.

The young drug runners are threatened with violence if they try to leave the fold. The infliction of such violence in order to obtain control is called ‘taxing’ in this Clockwork Orange sub-culture.

The NCA report County Lines Violence, Exploitation & Drug Supply, published two years ago, lists one case in which a victim had his hand severed and both legs broken, while another was warned that his sister, the mother of two small children, would be raped, along with his younger sister, aged 12, when he tried to break away from the gangs.

This is the world in which Nemiah Fletchman, one of the country’s brightest young tennis prospects, found himself. ‘I have known Nemiah since he was around 12 years old,’ said Tom Lemon, head coach at Bury’s Holcombe Club.

‘He was always a nice lad. He has never been anti-social or seemed like he was mixing in the wrong circles. I am very surprised by this.’

If ever there was a story that illustrates why, for the past year, the Daily Mail has been exposing the activities of county lines, then surely this is it.

Fletchman’s mother and three of his siblings attended court — with a mixture of ‘anguish and despair’ — when he was sentenced last week.

For Mrs Fletchman, it must have been especially painful: after all, she picked up needles and syringes from the tennis courts in Moss Side so that her son could practise.

Now he himself was a convicted drug dealer.

The real tragedy, though, is that, to borrow a line from the classic Marlon Brando movie On The Waterfront, Nemiah Fletchman ‘could have been a contender’.