Monash University has pushed back exams and the start date of the first semester over fears regarding the coronavirus outbreak.

The Melbourne university announced the new starting date for classes in 2020 will be March 9, and ordered students to stay home for 14 days if they spent any time in China.

They posted a statement to Facebook on Friday announcing the ‘difficult decision’ following the global health emergency. 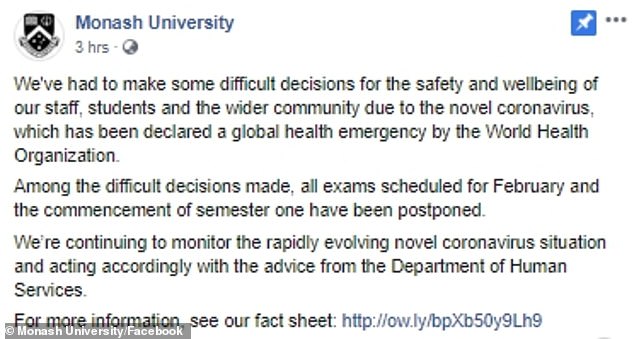 ‘We’ve had to make some difficult decisions for the safety and wellbeing of our staff, students and the wider community due to the novel coronavirus,’ they wrote.

‘Among the difficult decisions made, all exams scheduled for February and the commencement of semester one have been postponed.

‘We’re continuing to monitor the rapidly evolving novel coronavirus situation and acting accordingly with the advice from the Department of Human Services.’

The first week of semester will see classes live streamed and students are expected to participate before face-to-face teaching resumes the following week.

Postponed exams have also been moved to March 9 – 13, providing enough time for any students who were in isolation. 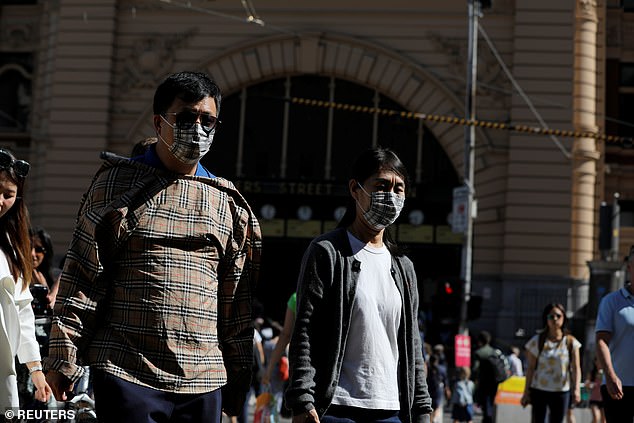 The outbreak in mainland China is now bigger than the 2003 SARS epidemic, when 5,327 cases of the killer virus were confirmed.

However, it is still behind the total toll of the outbreak, which infected 8,000 people.

Two people confirmed to be infected in NSW have improved significantly and could soon be released from hospital isolation, Dr Chant added.

There have been more than 40 people tested for the infection in NSW.

There are now seven confirmed cases of the virus in Australia, including four in NSW, two in Victoria and one in Queensland.

Australians trapped in the Chinese city of Wuhan due to the viral outbreak will be evacuated to Christmas Island.