On the whole, Prince Philip was reasonably circumspect when talking about his children and their relationships — except in the case of Prince Andrew and Sarah Ferguson.

He spoke with real affection of their daughters, Beatrice and Eugenie, but he made no secret of the fact that he regarded Sarah, Duchess of York, as ‘simply beyond the pale’.

One day in the summer of 1992, while she was staying at Balmoral with the Queen and Prince Philip, photo-graphs had appeared in a daily newspaper of Sarah topless and having her toes sucked by a lover in the South of France.

The Duke of Edinburgh decided that, as far as he was concerned, ‘enough was enough’. He did not want — or need — to have anything more to do with her.

The Duke of Edinburgh regarded Sarah, Duchess of York, as ‘simply beyond the pale’

For the remainder of Sarah’s stay at Balmoral, his actions spoke louder than words. ‘It was ridiculous,’ she told me. ‘As soon as I came in through one door, he’d be falling over the corgis to get out of the other. It was very funny. Except, of course, it wasn’t.’

After Sarah’s separation from Prince Andrew, the Queen continued to have tea with her from time to time.

But Prince Philip was resolute: he had no desire to see her again.

This Sarah knew and it pained her. ‘Of course I want to see him,’ she told me after her divorce. ‘I am the mother of his granddaughters, after all.’

I raised this with Prince Philip, but he just shrugged and said: ‘But the children come and stay.’

‘I don’t pretend to understand it,’ he said.

For Philip’s 80th birthday, she sent him a handsome dinner service. (It was supposed to have 12 settings, but it arrived with 13: the ‘sample’ had been included with the set. With Sarah, somehow, something always goes wrong). He sent her a nice thank you note and signed it, ‘With love’ from ‘Pa’. 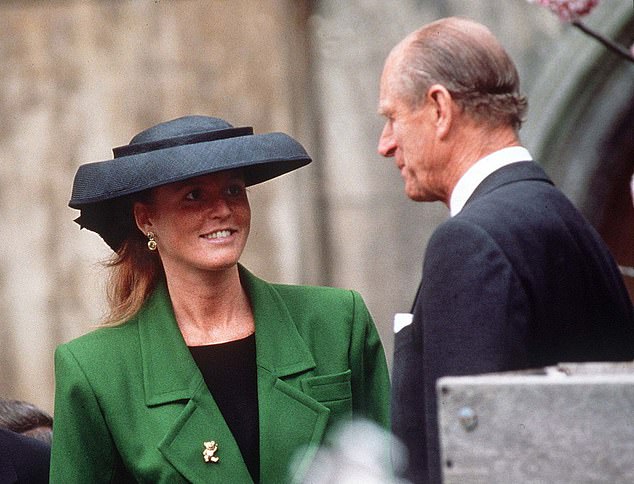 In truth, Philip and Sarah could hardly have been more different.

Sarah reckons that bottling up your feelings is positively harmful. When her daughters were younger, she told me: ‘I say to my girls, “Go on, tell me. Are you angry with me? Have I annoyed you?” We sit down and talk . . . Or I’ll make them stand in the middle of Sunninghill Park and scream — which is what I do.’

Sarah suddenly went, ‘Aargh!’ for me.

The prospect of encountering his former daughter-in-law screaming in the middle of Sunninghill Park could have been one of the reasons the Duke of Edinburgh decided to give her a wide berth after her separation from Prince Andrew.

He regarded reticence as a virtue and self-control as a quality to be admired.

In 2011, in the week of his 90th birthday, the Oprah Winfrey Network in the U.S. aired Finding Sarah, a six-part TV series in which the former Duchess of York shared her tears and her heartache with a TV psychiatrist and the viewing millions.

Philip did not tune in. He told me he was in favour of ‘self-awareness’, but against ‘the endless introspection that seems to be so prevalent these days’.

I came across a sentence by the writer and philosopher Iris Murdoch and showed it to him because I thought he’d like it: ‘Happiness is a matter of one’s most ordinary everyday mode of consciousness being busy and lively and unconcerned with self.’

For the last decade of his life, Prince Philip was happy not to have to lose any sleep over his assorted daughters-in-law.

Diana was dead. Camilla he accepted. Sophie he could rely on. And Sarah Ferguson he did not think about at all.

‘I think Sarah still obsesses about you,’ I said. He snorted derisively.

‘You clearly love her daughters,’ I persisted. ‘Is their mother completely beyond the pale?’ ‘Her behaviour was a bit odd,’ he said.