In the carousel, the 49-year-old actress included pictures and a short video revealing the gingerbread house from Solvang Bakery in California – the same ones the Kardashians and Jenners snap up every year – that included all the names from her blended family and the names of their pets.

Celebrating the holidays: Tori Spelling, 49, took to Instagram to show off her family’s The McDermotts gingerbread house late Wednesday evening

The Beverly Hills, 90210 star wrote in the caption of her post: ‘Our big beautiful blended human and pet family Gingerbread House for 2022.’

‘We are obsessed. This is such a special holiday year of embracing love, truth, understanding, kindness, and peace,’ she wrote. ‘Super grateful you could be a part of the start of a beautiful holiday family tradition’.

The custom-made gingerbread house was adorned with the names of their shared children and various pets — including guinea pigs, bearded dragons, chickens, and dogs. 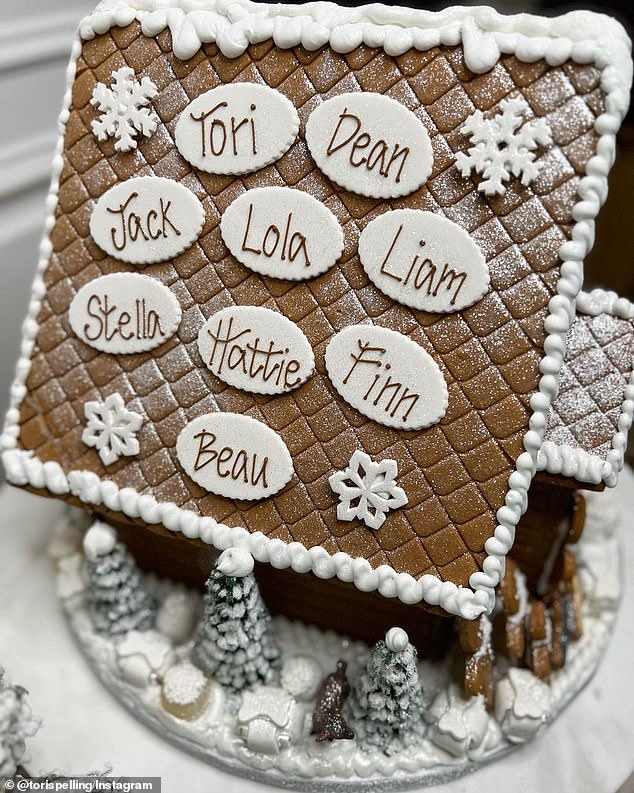 One big family: The actress revealed the gingerbread house that included all the names from her blended family and the names of their various pets

McDermott is also a father to another son named Jack, 24, whom he shares with his ex-wife — actress Mary Jo Eustace, 60.

On December 5, Jack called out Eustace on Instagram for her comments on his family on McDermott and Eustace’s shared podcast Ex’s & Uh-Ohs. 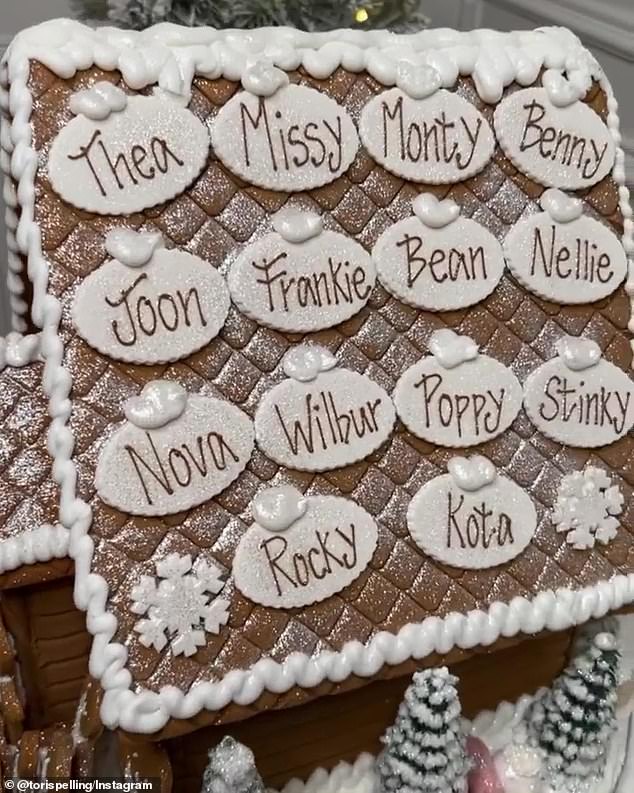 ‘Since my parents’ divorce in 2006, I have rarely spoke out as I preferred to stay out of it,’ he wrote. ‘Unfortunately, due to my mother’s recent decision to spread information about my dad, stepmom and my siblings I am no longer able to stay silent.’

‘About a week ago, my dad made the decision to step away from his podcast with my mother “Ex’s & Uh-Ohs”,’ he added.

‘He chose to leave due to negative comments about our family and consistent attempts to malign his character.’ 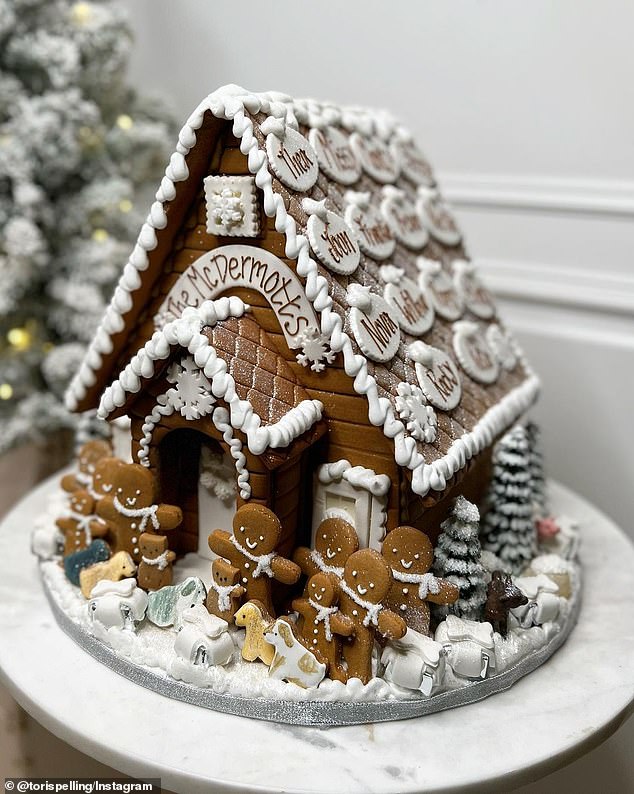 Everyone is included: The gingerbread house includes her 56-year-old husband Dean McDermott’s name despite divorce rumors still surrounding the couple

Jack continued, ‘He also chose to leave due to the producer of the show betraying his trust and divulging private information.

‘For 17 years, my father has atoned for mistakes he’s made in the past. He has grown so much as a person,’ he wrote. ‘Up until a week ago, our two families were [sic] living in harmony.’

He said, ‘With this podcast, it has driven a wedge between our two families and created a divide I am not capable of mending. 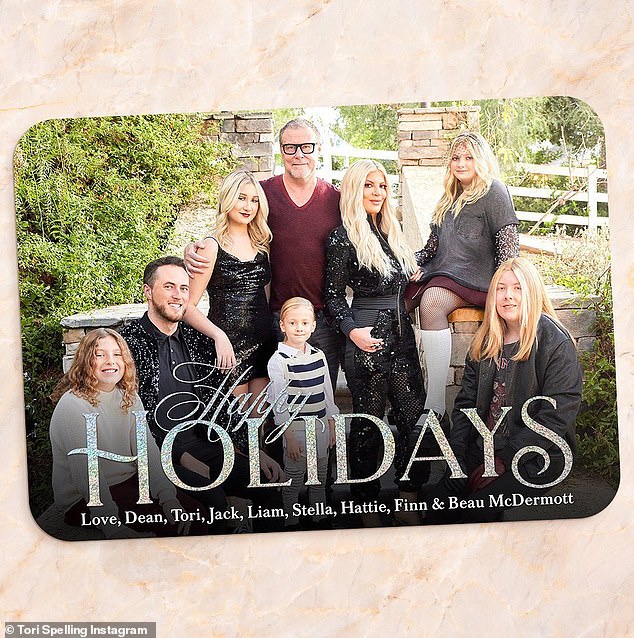 Holiday traditions: Previously, the couple showed an united front in their holiday cards for this year despite divorce rumors

A source close to Eustace revealed to People earlier this month, ‘I’m sure it’s very hurtful for Mary Jo to hear that her son is talking negatively about her.

‘Unfortunately, the facts stand that it was Dean who was unfaithful and walked out on Mary Jo and the kids and then again unfaithful to Tori,’ the source added.

The insider told People, ‘It was Mary Jo that did 90 percent of the parenting and has been a loving and consistent parent. With that said, she respects Jack’s right to express himself. And always will.’

McDermott and Eustace were married from 1993 to 2006. After their divorce, McDermott married Spelling later that same year. 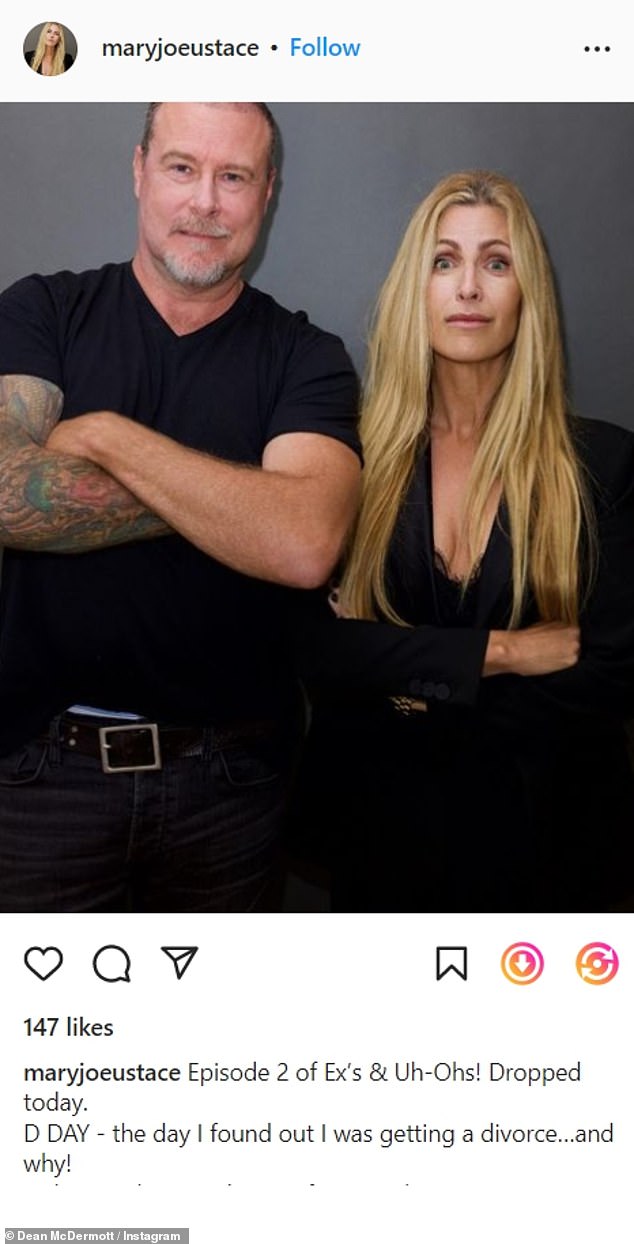 Uh oh! McDermott and Eustace share their son Jack and a podcast that he dropped out of earlier this month after Eustace made comments about McDermott’s behavior and the family