The BBC should restart playing the national anthem on television in the middle of the night to foster ‘unity and pride in our nation’, a Tory MP claimed today.

Romford MP Andrew Rosindell said the public broadcaster and other television companies should be encouraged to play the patriotic number more often in the year of the Queen’s platinum jubilee.

The anthem is still played nightly on radio channels like Radio 4, and was previously played at the end of broadcast on television channels.

But since the late 1990s BBC One has run the BBC News Channel overnight from around 1am, while BBC Two plays repeats of daytime shows in the small hours.

At culture questions today, Mr Rosenidell – sporting a Union Jack lapel badge – asked: ‘I know the minister will agree that the singing of the national anthem is something that provides great sense of unity and pride in our nation.

‘So in this year of the Queen’s Platinum Jubilee, will the minister take steps to encourage public broadcasters to play the national anthem and ensure the BBC restores it at the end of the day’s programming before it switches to News 24?’

Culture Secretary Nadine Dorries could be heard saying ‘fantastic’ and Culture Minister Chris Philp told MPs: ‘We fully support the signing of the national anthem, Her Majesty the Queen and other expressions of patriotism – including the flying of the Union Jack.

‘The more that we hear the national anthem sung, frankly, the better. Organisations like schools are free to promote it and the more we can do in this area the better it’ll be.’

But the idea was slammed by former Newsnight presenter Gavin Esler, who tweeted: ‘Dear Mr Rosindell If you have what’s known as ”a wireless” and are capable of tuning it to the excellent BBC Radio 4, you may find that the National Anthem is played at the end of every day. God save the Queen (and the country) from posturing parliamentarians.’

The anthem is still played nightly on radio channels like Radio 4, and was previously played at the end of broadcast on television channels, when the test card would be shown (above) 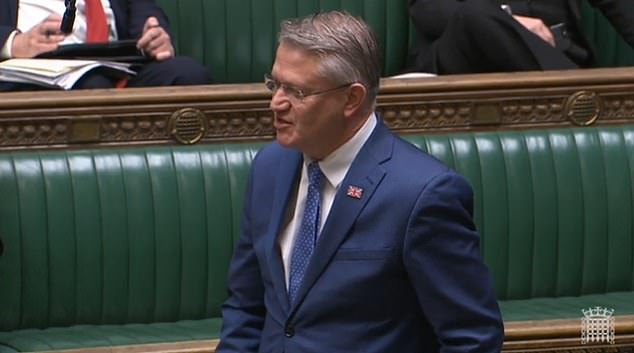 Romford MP Andrew Rosindell said the public broadcaster and other television companies should be encouraged to play the patriotic number more often in the year of the Queen’s platinum jubilee. 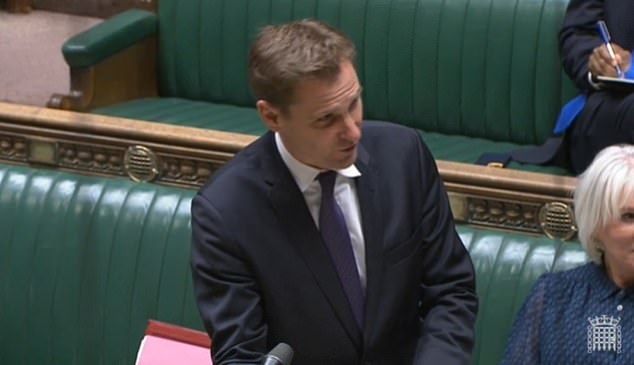 Culture Minister Chris Philp told MPs: ‘We fully support the signing of the national anthem, Her Majesty the Queen and other expressions of patriotism – including the flying of the Union Jack’

In the same session, Conservative former minister Sir Christopher Chope urged the Government to remove the power of the BBC to enforce sanctions against over-75s who have not paid the TV licence fee.

The MP for Christchurch said: ‘Do we trust the BBC? Wouldn’t it be much better to remove the power of the BBC to enforce sanctions by the criminal law against those who are over 75, who are supporting a policy that the Government says it also supports?’

Ms Dorries said the issue is ‘something which remains very much under review and on my desk’, adding: ‘The BBC has confirmed that no enforcement action has been taken, they recently began customer care visits to people over 75 who may need additional support in paying the TV licence.’

She replaces Fran Unsworth, who is retiring after four years in the role and leaves the BBC at the end of January.

Turness, 54, joined NBC News in 2013, becoming the first female president of a American network news division, and later served as president of the network’s global arm.

There had been speculation that Unsworth’s deputies Jonathan Munro, deputy director of BBC News, and Jamie Angus, senior controller of BBC News output and commissioning, were frontrunners for the role.

However, the position has gone to an external candidate. 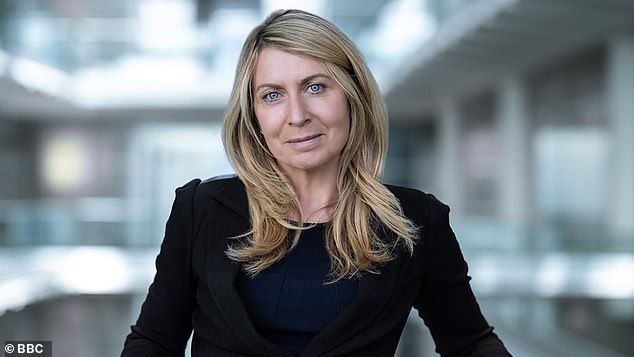 Turness said: ‘In the UK and around the world there has never been a greater need for the BBC’s powerful brand of impartial, trusted journalism.

‘It is a great privilege to be asked to lead and grow BBC News at a time of accelerated digital growth and innovation, when its content is reaching more global consumers on more platforms than ever before.’

She is a passionate advocate for the power of impartial journalism and a great believer in the BBC and the role we play, in the UK and globally.

‘She will do a brilliant job of leading our news and current affairs as we deliver on the BBC’s public service mission in the digital age.’

The BBC said it had renamed the position from director to chief executive to reflect its ‘ambition to continue to build the BBC’s global news brand and continue to grow its news services’.

Sian Williams, presenter of 5 News, said on Twitter: ‘@deborahturness is awesome. We’ve loved having her at @itn – when we were relaunching @5-News she was in the gallery, fizzing with enthusiasm and ideas. You are very lucky to have her, @BBCNews.’

Before being appointed to director of news and current affairs, Unsworth had worked at the BBC for more than four decades, having started her career in 1980 with BBC Radio 1’s Newsbeat.

She was the BBC’s acting director of news and current affairs for periods between 2012 and 2013 and became the first female director of the BBC World Service Group in 2014, overseeing the biggest expansion of the World Service since the 1940s.