Treasury Minister Liz Truss said her party must show more courage in promoting tax cuts for the well-off today as she made a pitch to be Boris Johnson’s Chancellor of the Exchequer.

Ms Truss, an ally of the Tory leadership frontrunner, said the party had failed to make the case for sweeping rate cuts for 10 years, which was why plans he unveiled last month had attracted ‘flak’.

Mr Johnson has put forward plans for a package of tax cuts, including for people earning more than £50,000.

The move led to a clash with Jeremy Hunt in the televised debate, with the Foreign Secretary claiming it was sending a signal that the Tories are ‘a party of the rich’.

The current Treasury Chief Secretary Ms Truss acknowledged she was ‘not yet at Number 11’ – the home of the Chancellor – but joked about her ambitions for the role.

Ms Truss, an ally of the Tory leadership frontrunner, said the party had failed to make the case for sweeping rate cuts for 10 years 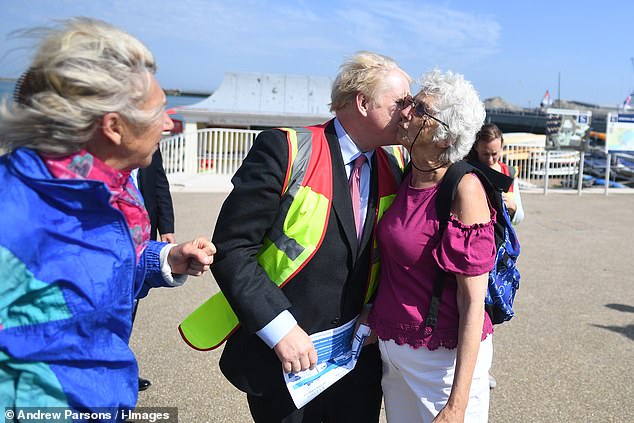 Mr Johnson (pictured today in Dover)  has put forward plans for a package of tax cuts, including for people earning more than £50,000.

Current incumbent Philip Hammond is widely expected to leave office when Theresa May is replaced in a fortnight.

At a Westminster lunch Ms Truss, who is said to face competition for the role from Home Secretary Sajid Javid, said: ‘The reason that Boris is getting flak for this is that the Conservative Party haven’t been prepared to make these arguments for at least a decade.’

‘If people feel, on an income of £55,000 that they have entered the higher rate tax band and that’s not fair, then that’s a problem and it can stop people wanting to aspire to earn more and be more successful,’ she said.

Mr Johnson’s proposal was part of a package and the Government had already cut income tax for lower earners, she said.

‘If we are never, ever prepared to say we are going to cut taxes for people on earnings of £60,000 I think that’s a problem,’ she said.

‘You have to look at the tax system as a whole.’ 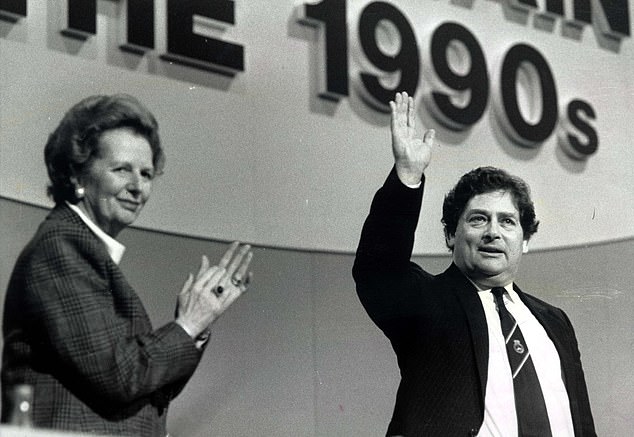 Ms Truss said the current overall tax burden on the economy was too high and suggested cutting stamp duty and reforming capital allowances for firms. 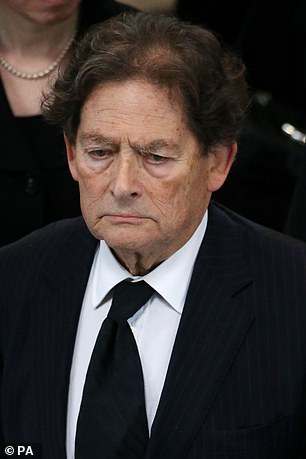 Mr Lawson, pictired at Margaret Thatcher’s funeral, was made Lord Lawson in 1992 and continues to sit in the House of Lords

‘The big problem we have faced over the last nine years is our growth levels haven’t been high enough.

‘We need to do everything we can to get those growth levels up, whether it’s issues of red tape on business, issues of too high taxation, opening up new trade opportunities – we need to go for growth.’

Ms Truss has made little secret of her ambition to become the UK’s first female chancellor.

She suggested that arch-Brexiteer Jacob Rees-Mogg was being touted to replace her as chief secretary, the second most senior minister at the Treasury.

‘As outgoing chief secretary, I leave the public finances in good shape – the deficit is now down to 1 per cent, the lowest since 2002. Much better shape than when (Labour’s) Liam Byrne left his infamous note saying ‘there’s no money left’.

‘My note will be different. It will say ‘Jacob, if you need anything, I’ll be just down the hall’.’

She said no promises had been made about jobs, and it would be ‘presumptuous’ because the leadership race had not concluded, but she wanted to be ‘in the engine room of the British economy’.

Shadow chancellor John McDonnell said: ‘This is back to the 1980s from Liz Truss and the Tories, with tax cuts for the rich and increasing inequality.

‘It’s hard to believe that they haven’t learned the lessons of nearly a decade of Tory austerity.’