The Tories will fail to cut net migration to their target of ‘tens of thousands’ – even under the most generous forecasts, according to the budget watchdog.

In its assessment of George Osborne’s Budget decisions today, the Office for Budget Responsibility (OBR) published different scenarios on future immigration figures and under each it finds that David Cameron’s pledge to cut net migration to under 100,000 will not be met before 2020.

Last year 323,000 more people came to the UK than left despite the Tory election manifesto repeating the pledge it made in 2010 to reduce net migration to ‘tens of thousands’.

The OBR stated today: ‘Even under the low scenario, net inward migration does not quite drop into the ‘tens of thousands’ sought by the Government within the forecast period’ 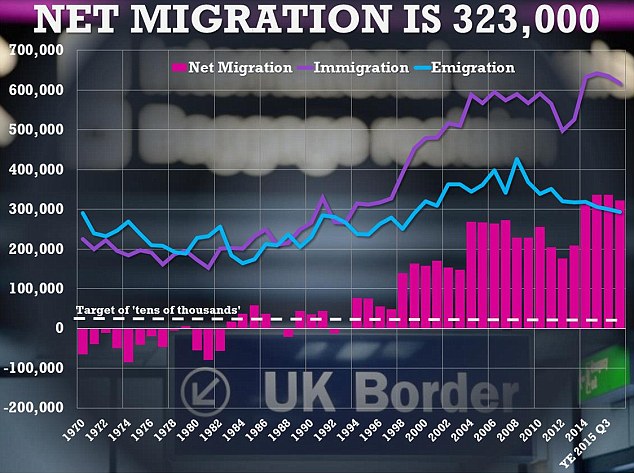 The OBR forecasts net migration will fall over the next few years but could still be around 270,000 a year by 2020.

ROMANIAN AND BULGARIAN IMMIGRATION UP BY 38 PER CENT

130,000, or 21 per cent, arrived from the ‘EU15’ group of countries: Austria, Belgium, Denmark, Finland, France, Germany, Greece, Ireland, Italy, Luxembourg, Netherlands, Portugal, Spain and Sweden. This figure is up 5 per cent on the previous year.

69,000, or 11 per cent, came from the ‘EU8’ group of countries: Czech Republic, Estonia, Hungary, Latvia, Lithuania, Poland, Slovakia and Slovenia. This figure fell on the year by 9 per cent.

The remaining 2,0 (0.3 per cent) came from Malta, Cyprus and Croatia. This figure was down by 60 per cent on the previous year.

And even by its most generous forecast, it still predicts that more than 100,000 people will arrive in the UK than emigrate in 2020 – meaning the Tories will have broken their flagship immigration pledge for two Parliaments in a row.

The OBR states: ‘Even under the low scenario, net inward migration does not quite drop into the ‘tens of thousands’ sought by the Government within the forecast period.

Last month figures released by the Office for National Statistics revealed that net migration fell for the first time since the end of 2013.

But at an estimated 323,000 in the year to September, net migration is more than three times the Government’s aim of less than 100,000 and has now been running at an annual level of more than 300,000 for almost two years.

The figures showed a rise of 31,000 on the previous year, with the rise driven by a dramatic 38 per cent increase in the number of Romanian and Bulgarian migrants coming to Britain – and the ONS release today said 10,000 of the 55,000 arrivals were not here for work purposes.

Responding to the figures last month Home Secretary Theresa May said net migration remained ‘too high’ but insisted Mr Cameron’s deal with the EU would ‘clamp down’ on abuses and reduce the pull factor of migration.

The latest migration figures also revealed that net migration from the EU was at 172,000 in the year to September. 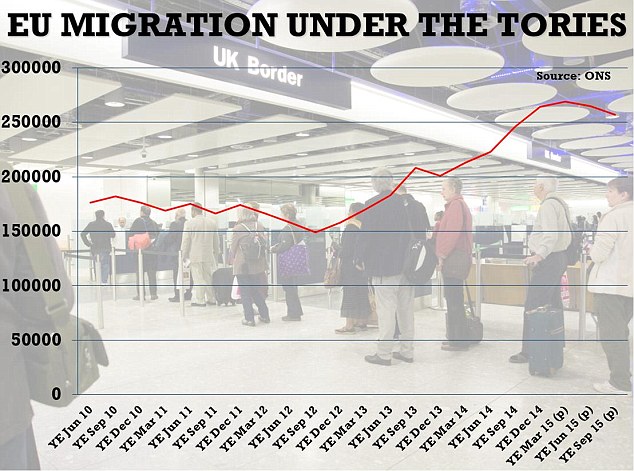 Since 2010, migration from the European Union has generally risen before easing during 2015. ONS migration figures from the past 12 months are based on provisional data 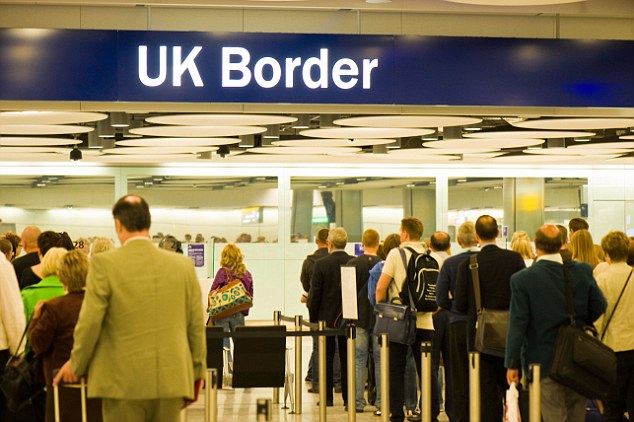 An estimated 165,000 EU citizens came to Britain for work-related reasons. Of those, 58 per cent had a definite job and 42% came looking for work.

There was a ‘statistically significant’ increase in immigration of citizens of Bulgaria and Romania compared with the year before, up by 15,000 to 55,000. Migrants from the two countries now account for more than a fifth (21 per cent) of total EU immigration. 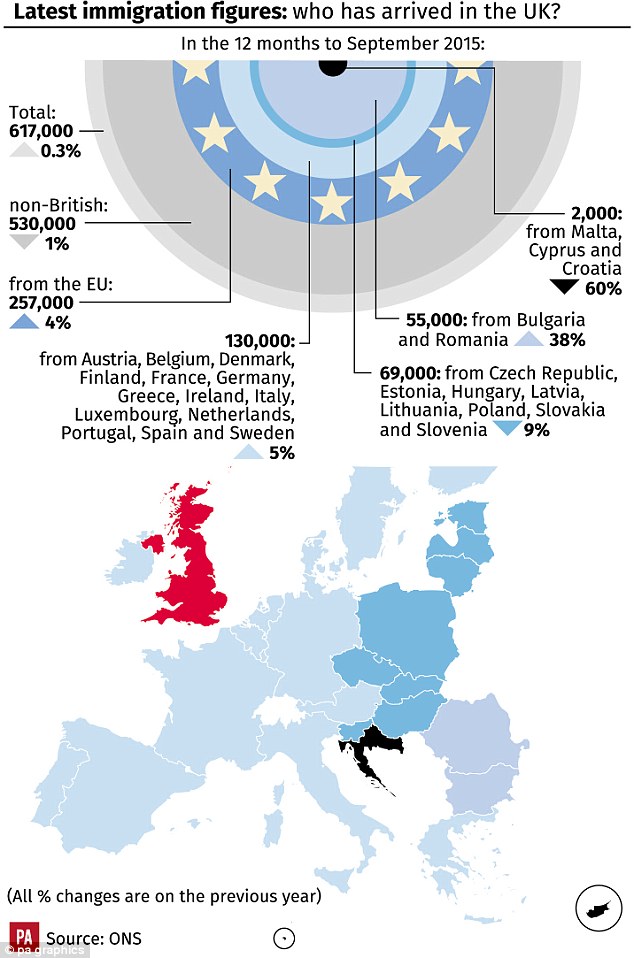