Weekend storms raked parts of the Southeast, leaving deaths and injuries in their wake as a tornado smashed into a commercial district in a small Mississippi city and drenching rains fed a rising flood threat.

A woman was killed when a tornado hit Columbus, Mississippi on Saturday and a man died when he drove into floodwaters in Tennessee.

Authorities said 41-year-old Ashley Glynell Pounds of Tupelo and her husband were renovating a house Saturday evening. The building collapsed and killed her when her husband went to get them something to eat.

Smith said 12 other people were injured, but the injuries did not appear to be major.

Weekend storms raked parts of the Southeast, leaving deaths and injuries in their wake as a tornado smashed into a commercial district in a small Mississippi city and drenching rains fed a rising flood threat 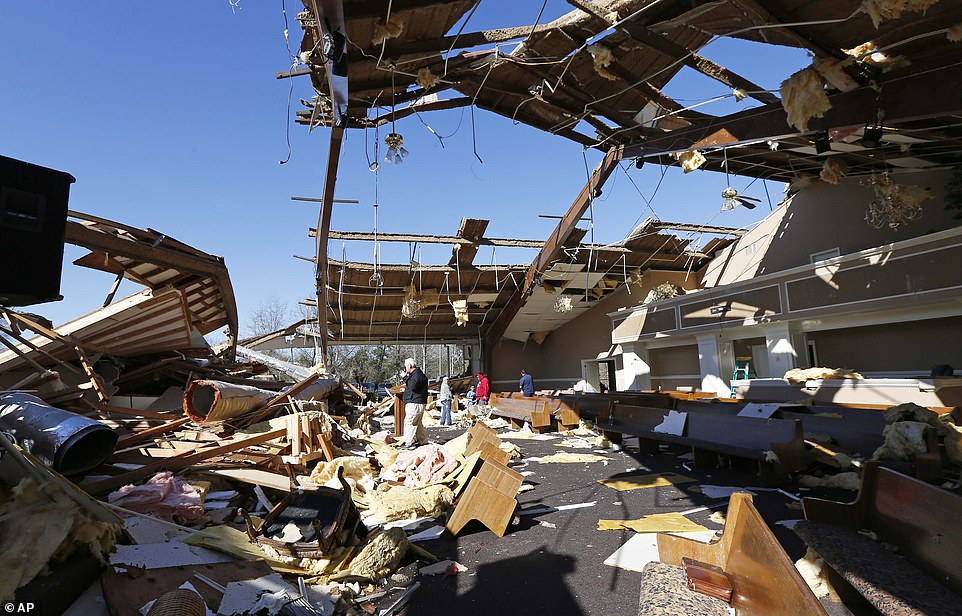 At First Pentecostal Church in Columbus, the Rev. Steve Blaylock said the building was ‘a total loss,’ with a wall pushed in, holes in the roof and substantial water damage 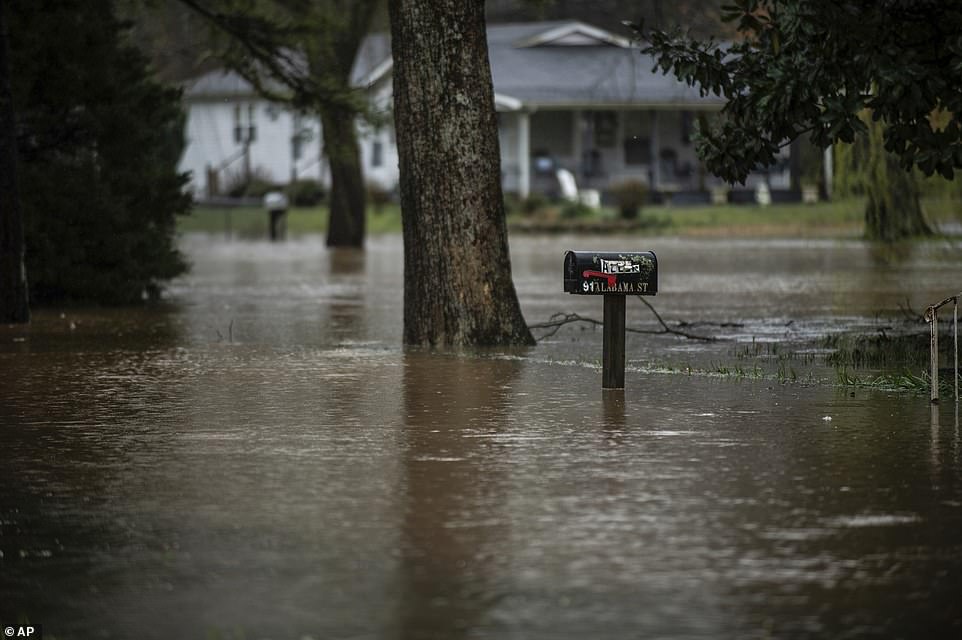 Road officials in Kentucky, Tennessee, Alabama and Mississippi reported Friday that more than 50 state or federal highways were closed by flooding

In Knox County, Tennessee, officials said a man died after his vehicle became submerged in high water. The sheriff’s office says emergency crews got the man out of his vehicle and took him to a hospital, but he was later pronounced dead.

Heavy rain has seen as much as a foot of rain in parts of Mississippi, Alabama and Tennessee.

The tornado Saturday afternoon in Columbus was confirmed on radar, according to National Weather Service meteorologist Anna Wolverton. She said experts would be headed Sunday to the east Mississippi city of about 23,000 people to gauge the tornado’s intensity.

At First Pentecostal Church in Columbus, the Rev. Steve Blaylock said the building was ‘a total loss,’ with a wall pushed in, holes in the roof and substantial water damage.

He and his congregants were trying to salvage what they could on the morning after the storm. He said they still would hold a Sunday prayer service and even planned to go ahead with a scheduled baptism, using a borrowed portable baptismal pool.

‘We will rebuild. We’ve got a good church here,’ Blaylock said. ‘It’ll be a testimony of God.’ 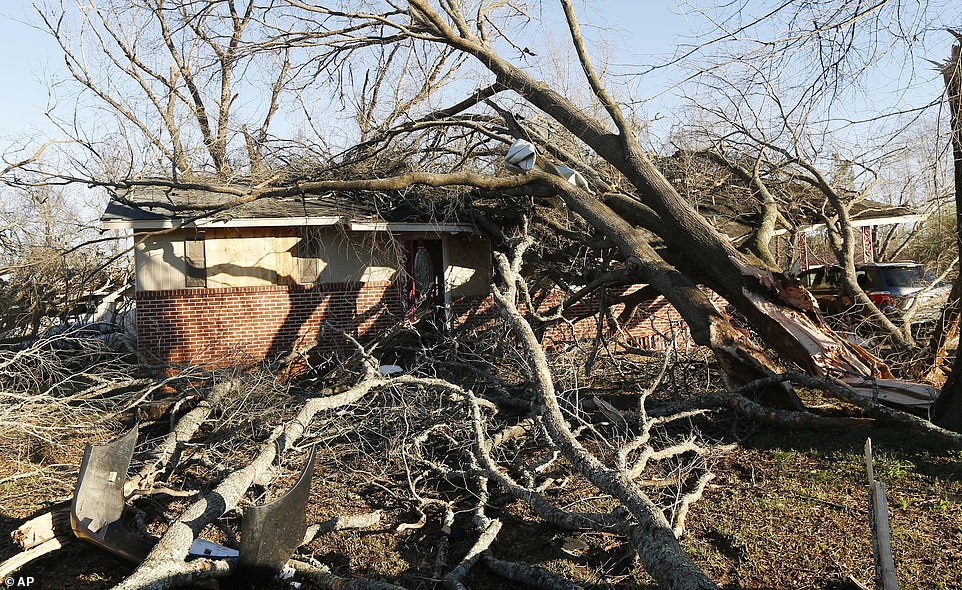 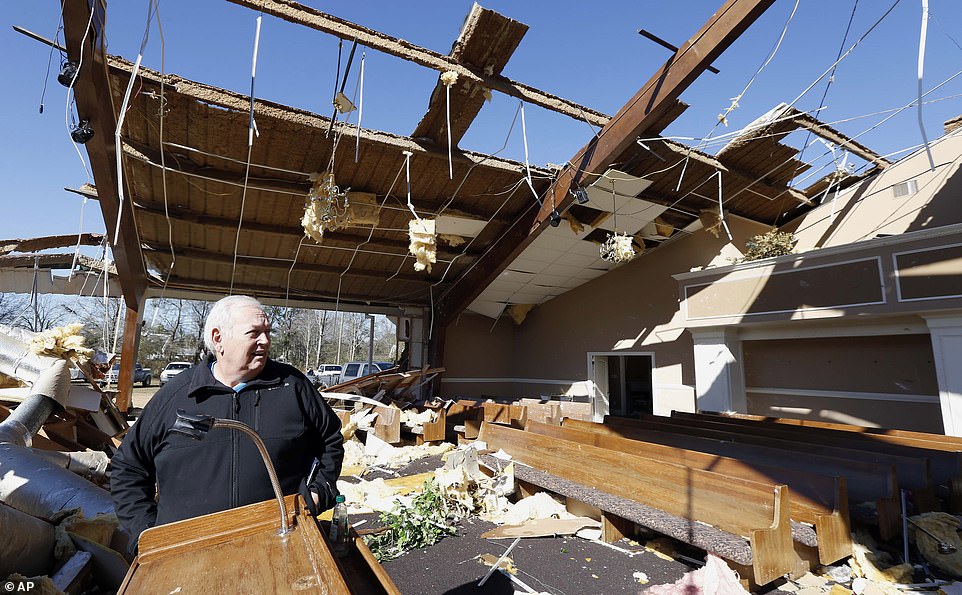 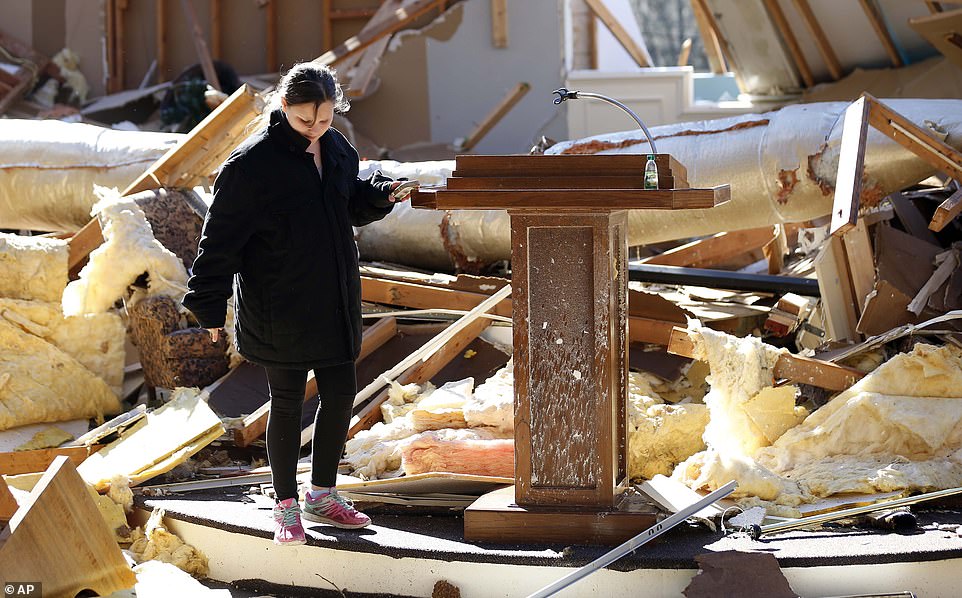 A child plays around the podium that was virtually undamaged or moved in the tornado that destroyed First Pentecostal Church in Columbus, Miss. 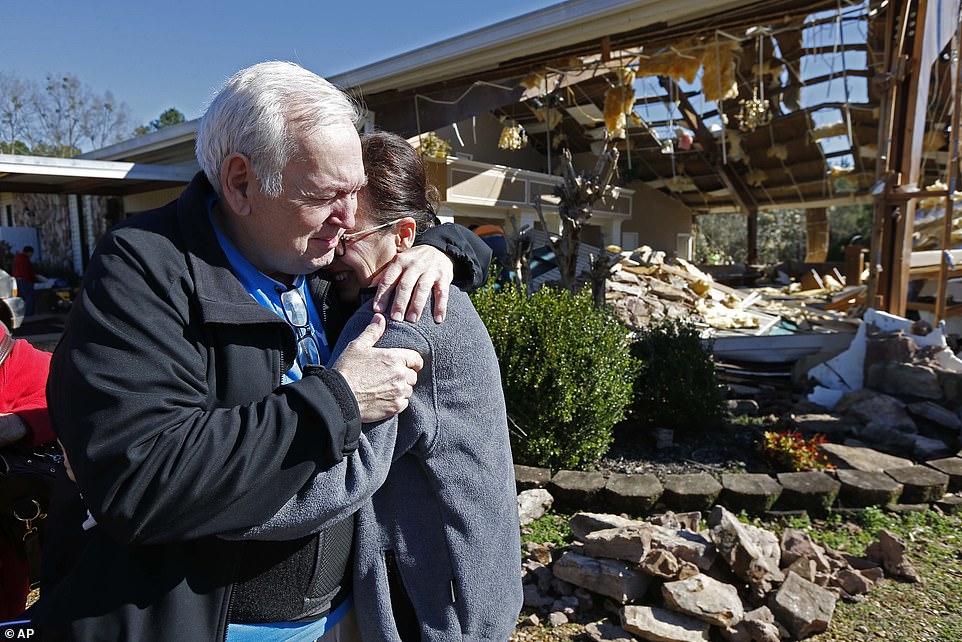 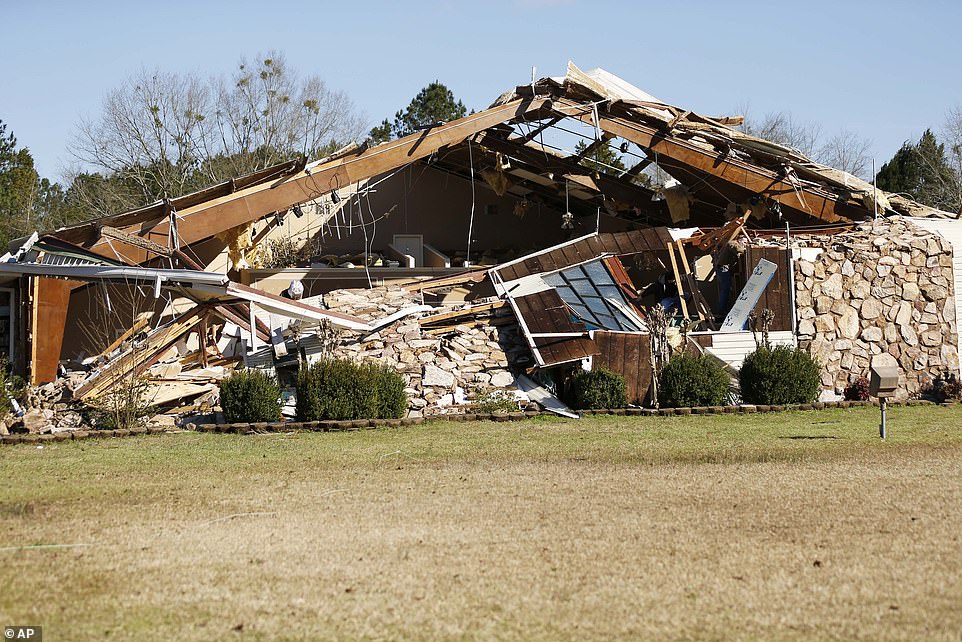 Broken lumber, loose paneling, insulation, and destroyed pews are all that remains of the First Pentecostal Church on Sunday morning

Residents of one street on the east side of Columbus were out early Sunday morning with chain saws, clearing away branches of the many trees that had snapped or were uprooted in the storm. Metal siding and roofing material was scattered throughout the neighborhood of older homes. While the houses generally remained standing, sheds and outbuildings were mostly demolished.

Lee Lawrence, who said he has been selling used cars for decades in Columbus, said four buildings on his car lot were destroyed. He said trees toppled across vehicles and car windows were blown out.

Lawrence said he was at home getting ready to take a bath when the storm struck.

‘The wind all of a sudden just got so strong and it was raining so much you could hardly see out the door, and I could hear a roaring. Evidently it came close,’ he said.

‘It will be a start-over deal,’ Lawrence said. ‘I can’t say it will come back better or stronger, but we’ll come back.’

A 1923 Studebaker, left and a 1930 Chevrolet Paddy Wagon are exposed at Lawrence Motors in Columbus, Miss. on Saturday

A destroyed business along Conway Drive in Columbus, Miss., sits in ruins after the tornado struck 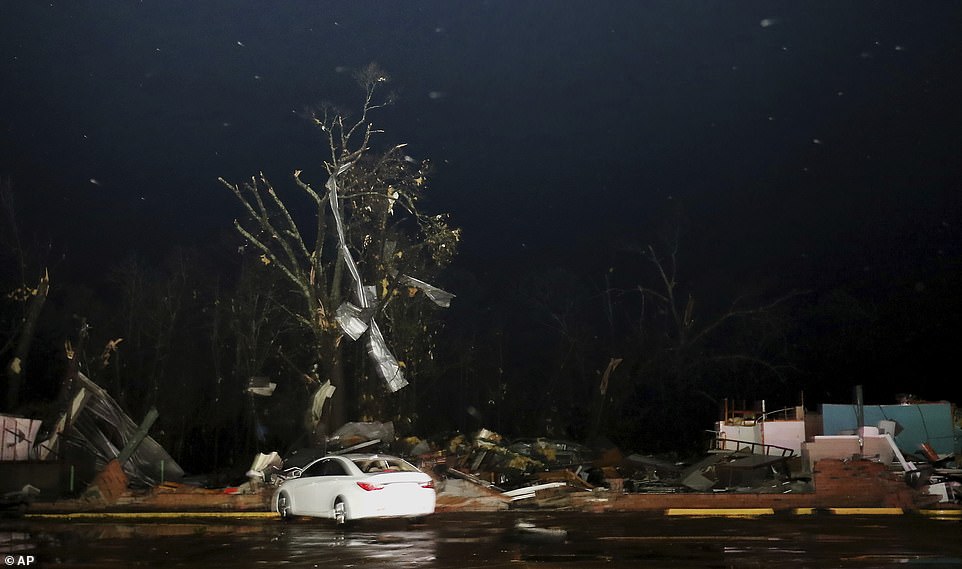 Tin from nearby buildings sits in a tree above a destroyed vacant commercial structure along highway 50 in Columbus, Miss 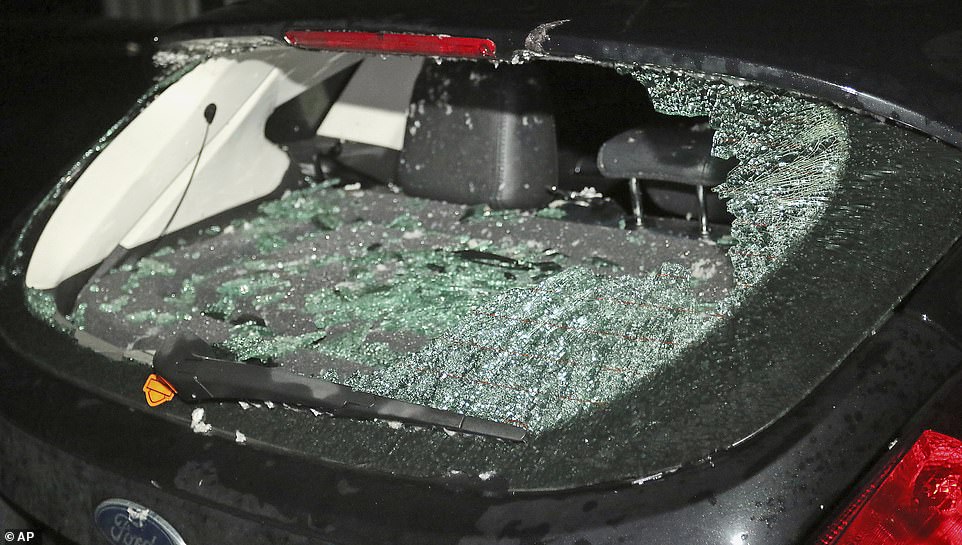 A car in the parking lot of Fast Dog Printing Co. on Conway Drive in Columbus, Miss., has it’s rear window smashed after a tornado struck the area on Saturday 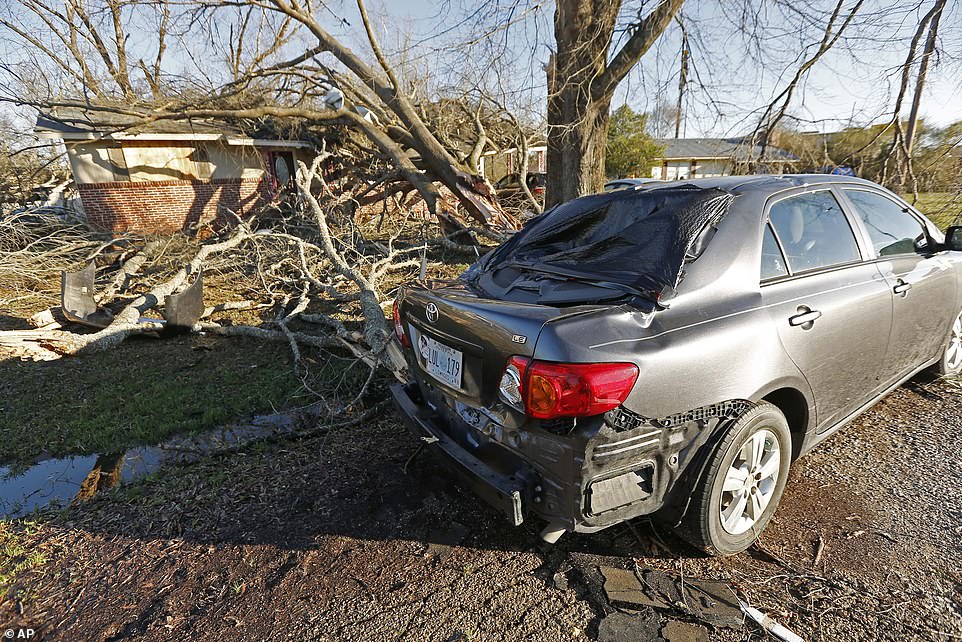 Some antique cars on Lawrence’s lot were parked among the damage and a nearby pet grooming business appeared now to be mostly twisted piles of metal. A printing shop had been speared by a pipe with great force and what seemed to be a vacant commercial building nearby appeared heavily damaged.

Firefighters and law enforcement officers cordoned off the area, and power was out in the area.

Elsewhere around the South, homes, highways, parks and bridges were flooded or put out of commission amid the heavy rains and severe storms. News outlets report that water rescues have been performed in some Middle Tennessee counties. Flash flood warnings and watches remained in place throughout the South and one Mississippi community reported large hail.

Interstate 40 near the Tennessee line with North Carolina was closed by a rockslide, one of the dozens of roads and highways shut down throughout the region, transportation officials said.

Officials said a mudslide destroyed a Subway restaurant in Signal Mountain, Tennessee. No injuries were reported. 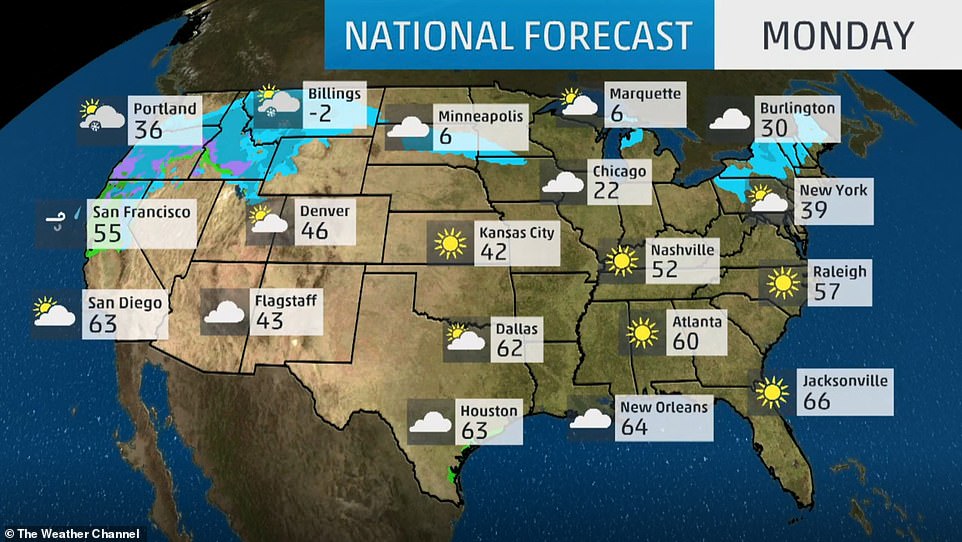 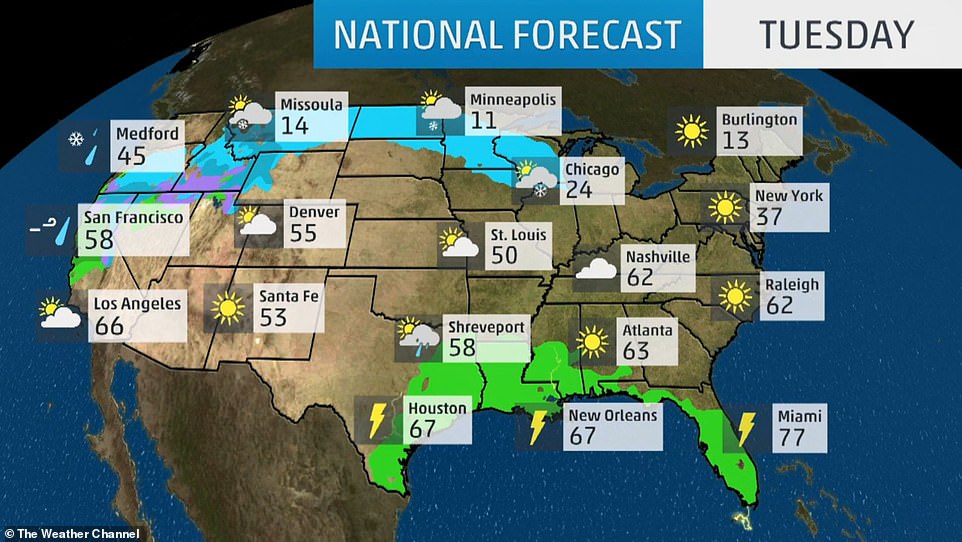 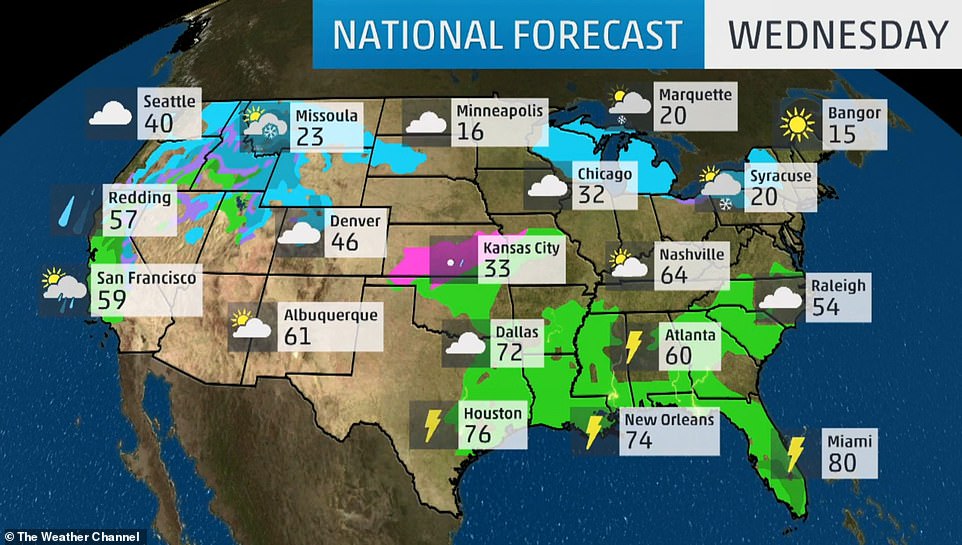 In Bruce, Mississippi, rivers broke flood stage and flash floods poured into homes and businesses. News outlets report that officials in Grenada, Mississippi, declared a local state of emergency after dozens of streets and homes flooded. A 6-mile (9-kilometer) stretch of the Natchez Trace Parkway was closed in Mississippi after water covered part of the road.

The National Weather Service had issued a flash flood warning for northwestern Lafayette County in Mississippi after emergency officials reported that a local dam was at risk of failing. Meteorologist Kole Fehling says emergency officials reported the threat involved the Audubon Dam, which blocks a creek on the north side of Oxford and a subdivision.

Weather officials said the storm’s impact stretched from eastern Arkansas to northern Georgia and beyond. Alabama’s governor declared a state of emergency in several counties, hoping to speed recovery in event of damages.

Kentucky announced Friday that it was closing the U.S. 51 bridge over the Ohio River to Cairo, Illinois, because of flooding on the southern approach. The bridge, which carries 4,700 vehicles a day, is likely to stay closed until Thursday, and possibly longer.

Near Jamestown, Kentucky, the Army Corps of Engineers said it was increasing releases from the Wolf Creek Dam on the Cumberland River. Areas downstream of the dam, from Rowena to Burkesville, could be affected by flooding as a result, officials said.

The Ohio River at Cairo is predicted to crest Sunday at its third-highest level ever recorded, and stay that high into next week. The Tennessee River near Savannah, Tennessee, also is forecast to crest at near-record levels.