A tornado was spotted over downtown Orlando on Saturday evening with the National Weather Service issuing a tornado warning until 8:15pm.

Those nearby describe extremely windy and turbulent conditions as the storm passed through the downtown area.

Incredibly clear footage was shot by Orlando residents all over the city out on the street, from high-rise buildings and also from nearby lakes.

The Orange County Sheriff’s office tweeted, ‘Deputies are responding to reports of a tornado that touched down in the Fern Creek and Conway areas. There are numerous reports of damage and downed power lines.’ 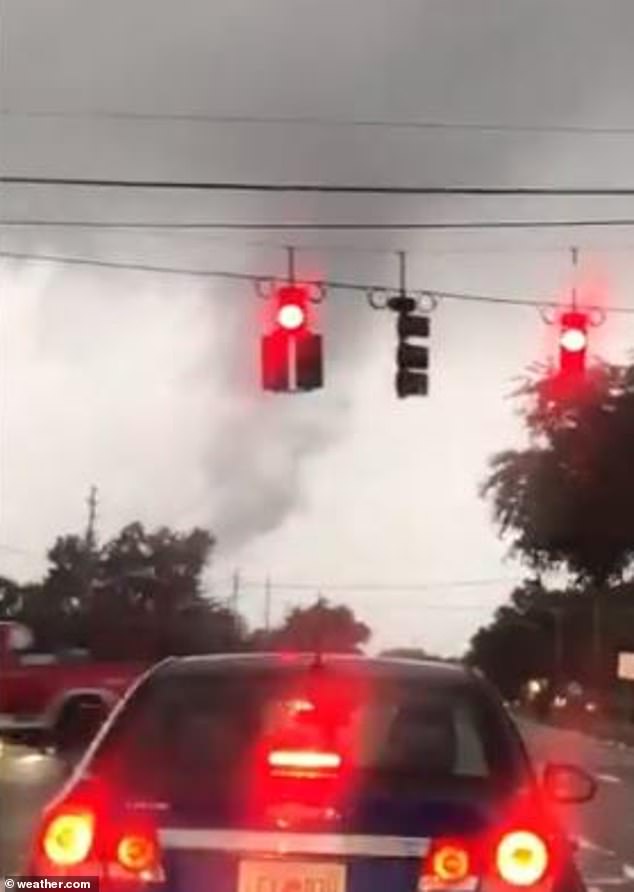 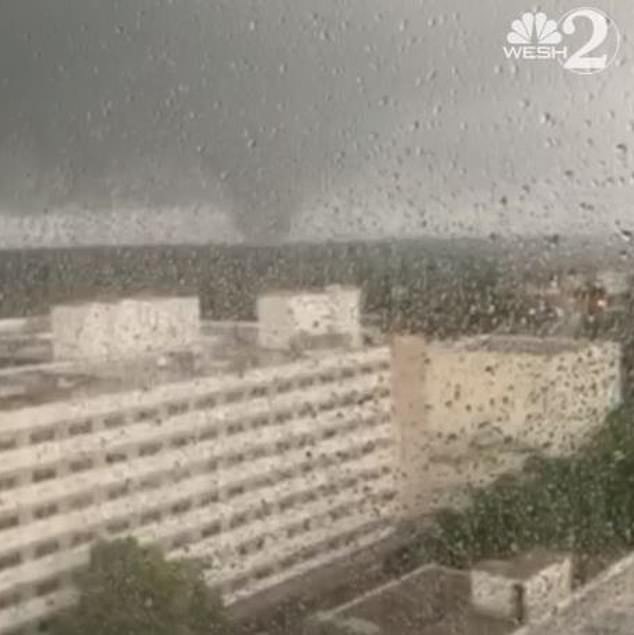 Around 2,000 homes were without power according to the Orlando Utilities Commission.

The tornado was also detected over the College Park area, north of downtown the NWS confirmed.

Aside from Saturday evening’s tornado, a larger weather system is causing concern just off the south coast.

A re-energized Tropical Storm Cristobal advanced toward the U.S. Gulf Coast on Saturday, bringing with it the heavy rains that already caused flooding and mudslides in Mexico and Central America. 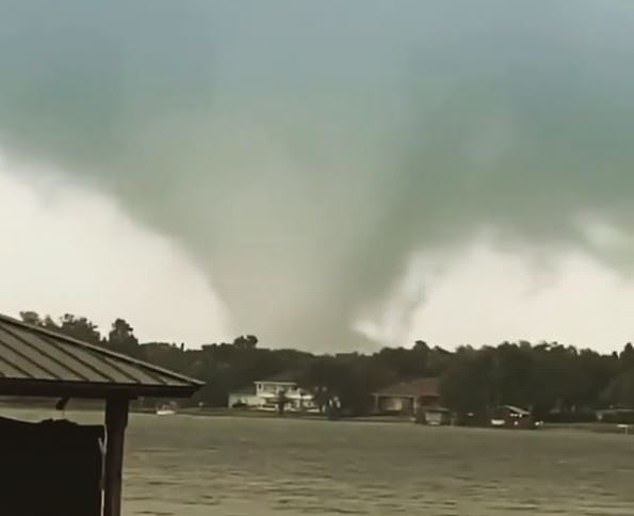 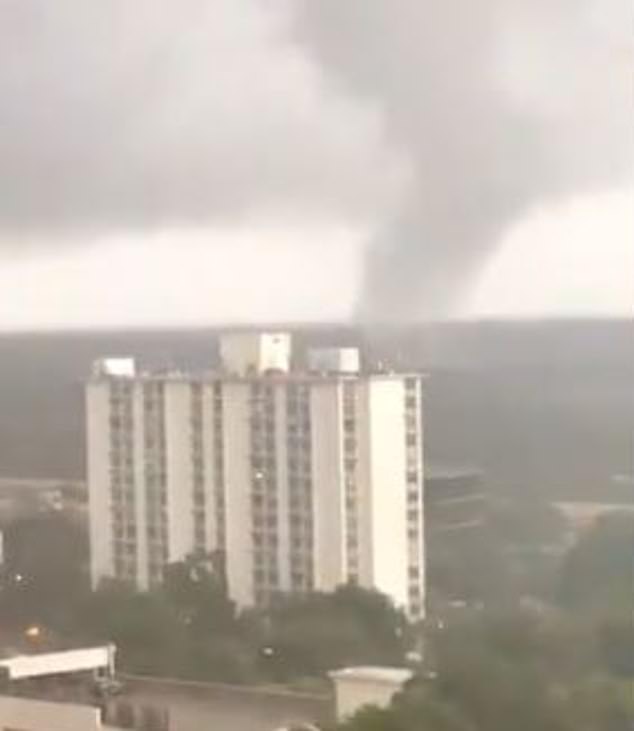 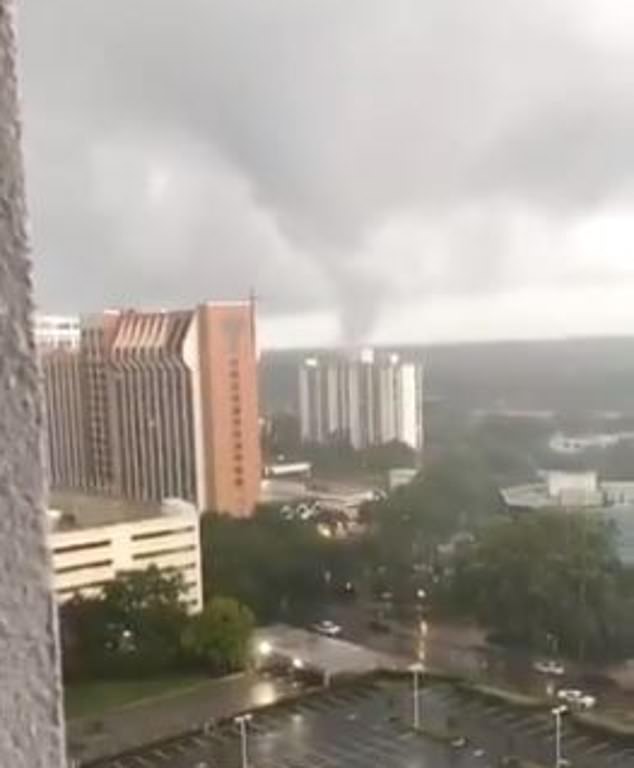 2,000 homes are without power as a result of the tornado but there was no significant damage 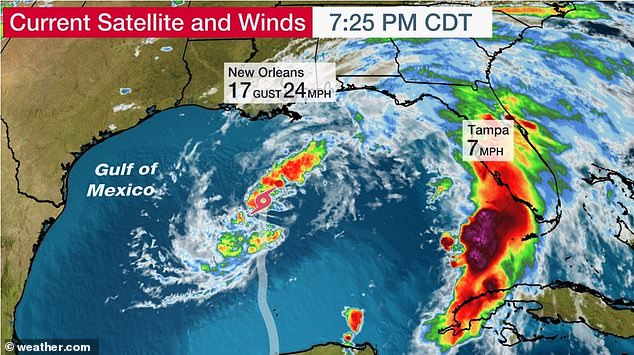 Tropical Storm Cristobal is moving northwards through the Gulf of Mexico

After weakening to a tropical depression while moving over land in Mexico’s Gulf coast, Cristobal headed back into the southern Gulf of Mexico from the Yucatan Peninsula on Friday and powered back up into a tropical storm. Forecasters said it would arrive on U.S. soil late Sunday but was not expected to grow into a hurricane.

The National Hurricane Center in Miami said the storm was expected to slowly strengthen until it makes landfall, expected Sunday night along the U.S. Gulf Coast. Outer rain bands from the storm were already moving across parts of the Gulf Coast on Saturday evening.

Cristobal’s maximum sustained winds had strengthened to 50 mph (85 kph) by early Saturday and it was moving north at 12 mph (19 kph). As of Saturday evening, the storm was centered about 235 miles (380 kilometers) south-southwest of the mouth of the Mississippi River.

The Hurricane Center said the storm could cause heavy rains from East Texas to Florida this weekend and into early next week. A tropical storm watch was posted for the northern Gulf of Mexico coast from Intracoastal City, Louisiana, to the Alabama-Florida border. 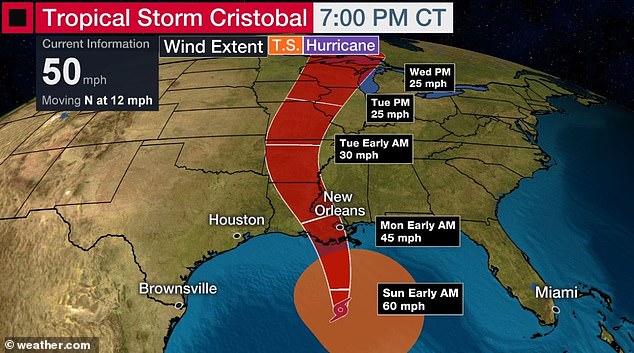 In Louisiana, Gov. John Bel Edwards has declared a state of emergency to prepare for the storm´s possible arrival.

‘Now is the time to make your plans, which should include the traditional emergency items along with masks and hand sanitizer as we continue to battle the coronavirus pandemic,’ Edward said in a statement released Thursday.

On Friday, he asked President Donald Trump to declare a pre-landfall emergency for the state due to the storm’s threat.

‘We are confident that there will be widespread, heavy rainfall and coastal flooding,’ Edwards said in a letter to the White House. ‘I anticipate the need for emergency protective measures, evacuations, and sheltering for the high-risk areas. The length of possible inundation is unknown and will likely require post-flood activities.’

Jefferson Parish, a suburb of New Orleans, called for voluntary evacuations Saturday of Jean Lafitte, Lower Lafitte, Crown Point and Barataria because of the threat of storm surge, high tides and heavy rain. Residents were urged to move vehicles, boats and campers to higher ground. 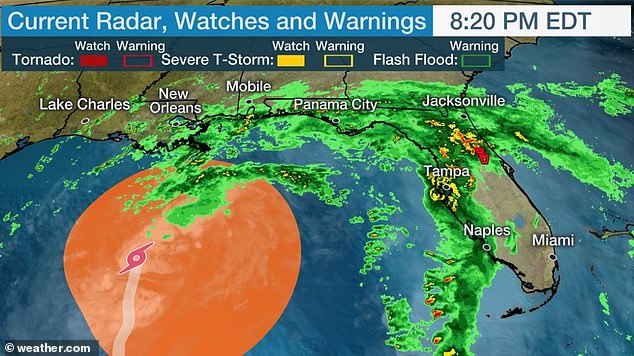 Although the storm is some way off the coast, many violent storms are being generated east

‘We want to make sure residents are safe as this storm approaches so we are taking all the necessary precautions to be fully prepared,’ Jean Lafitte Mayor Tim Kerner Jr. told The Advocate.

‘We need to ensure residents are protected as this storm draws near, so we are taking all the necessary precautions to be completely prepared,’ he said.

The hurricane center’s forecast path puts Alabama on Cristobal’s east side, far from where the center comes ashore. Still, the southwest part of the state is expected to get gusty winds, heavy rain, storm surge and possibly tornadoes as the storm moves closer to the coast. Those effects were expected as early as Saturday night. 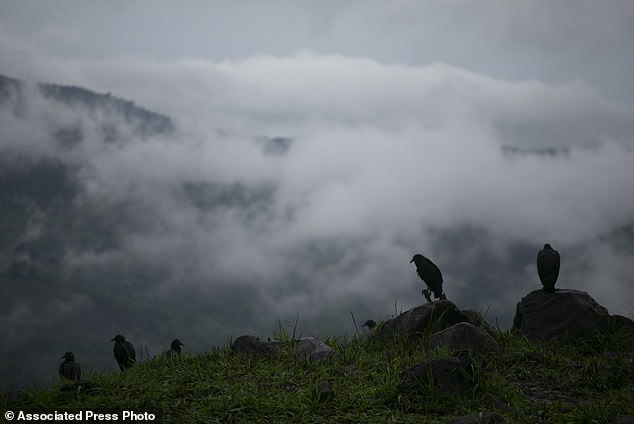 Rain clouds hover over mountains during tropical storm Amanda in Barberena, eastern Guatemala last Sunday. It was the first tropical storm of the season

‘Sunday will be very wet and windy as Cristobal passes west of the area, placing the central Gulf Coast on the `dirty´ eastern side of the storm,’ the weather service said.

Cristobal formed this week in the Bay of Campeche from the remnants of Tropical Storm Amanda, which had sprung up last weekend in the eastern Pacific and hit Central America. The two storms combined to soak the region with as much as 35 inches (89 centimeters) of rain in some areas over the past week. At least 30 deaths have been attributed to the two storms and the flooding and landslides they unleashed.

In Bacalar, in the south of Mexico’s Quintana Roo state, 230 families were isolated by the rains and had to be airlifted out, David Leon, Mexico’s national civil defense coordinator, said Friday. Leon added there had been light damage in 75 municipalities in seven states.